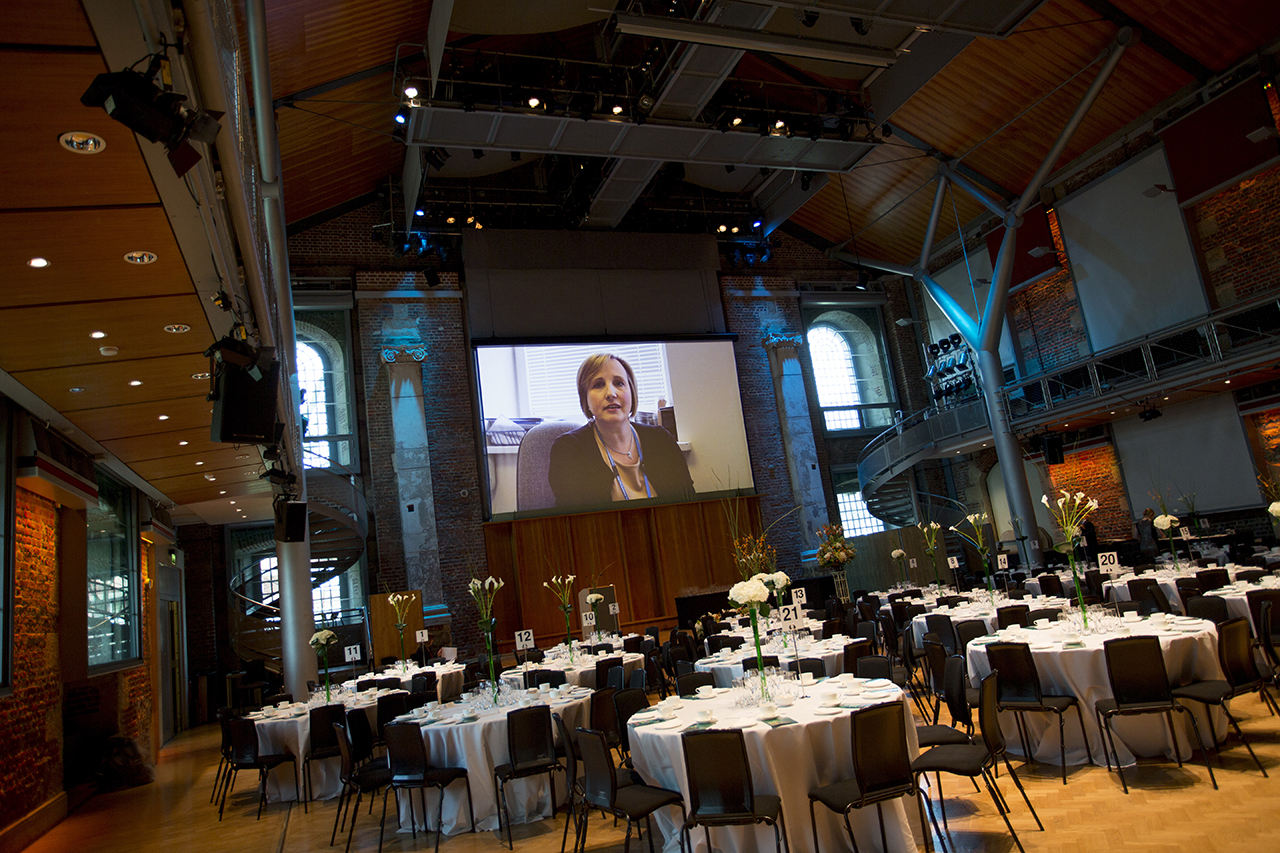 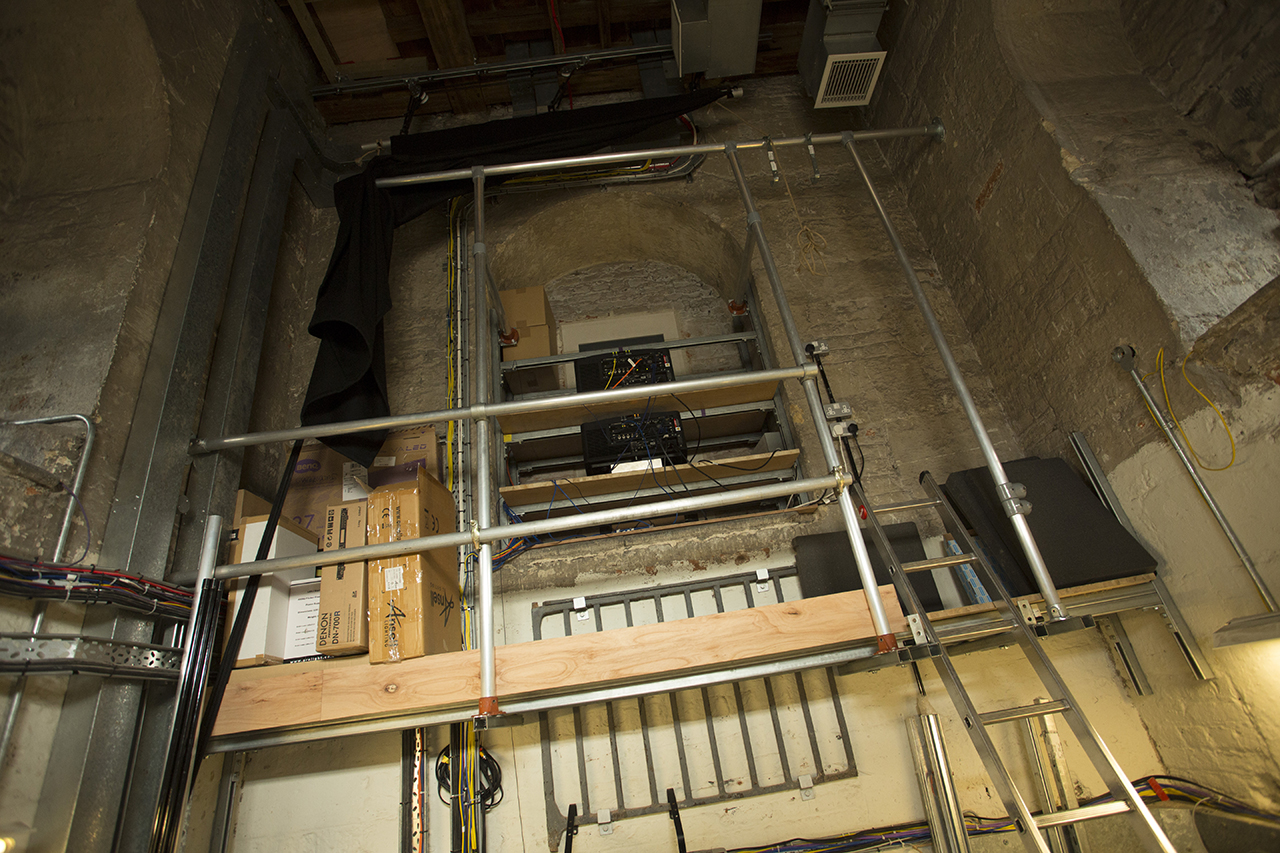 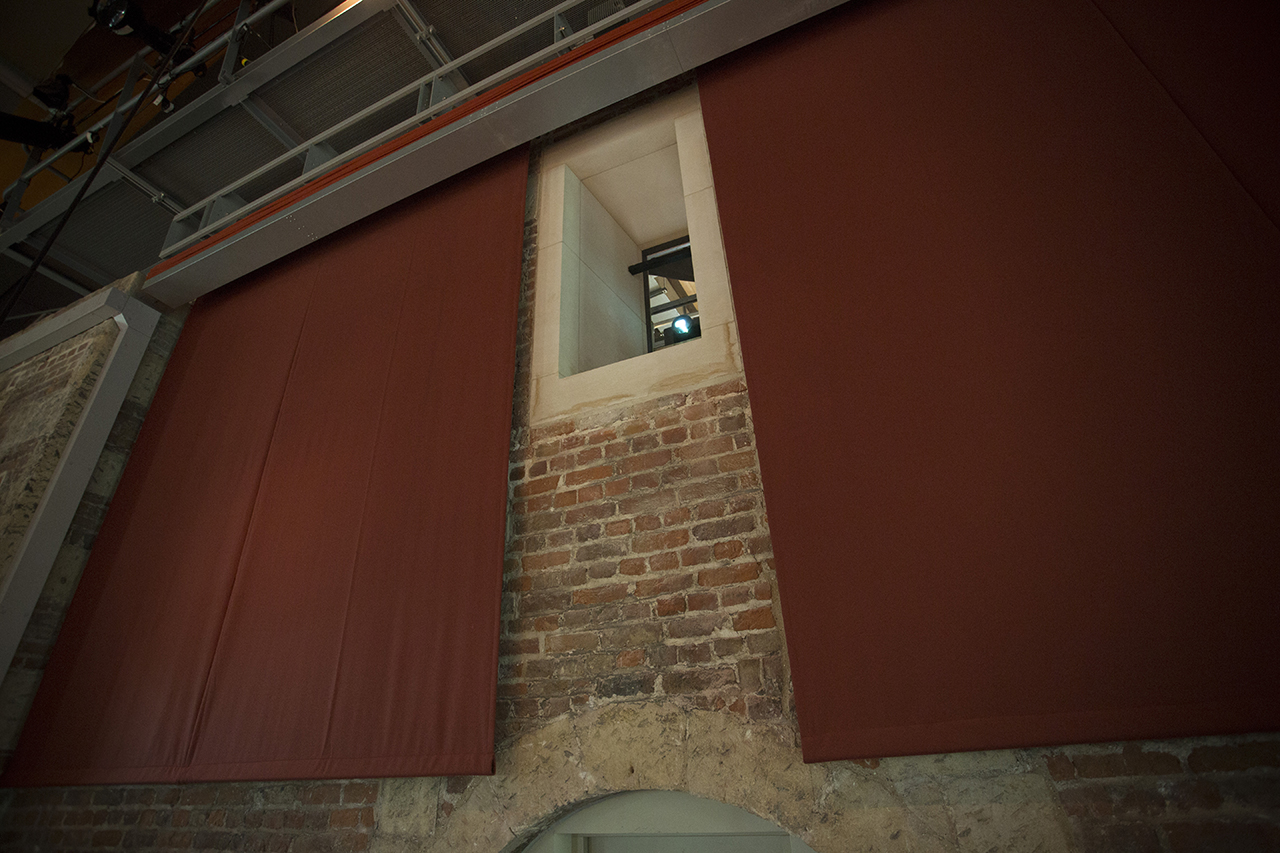 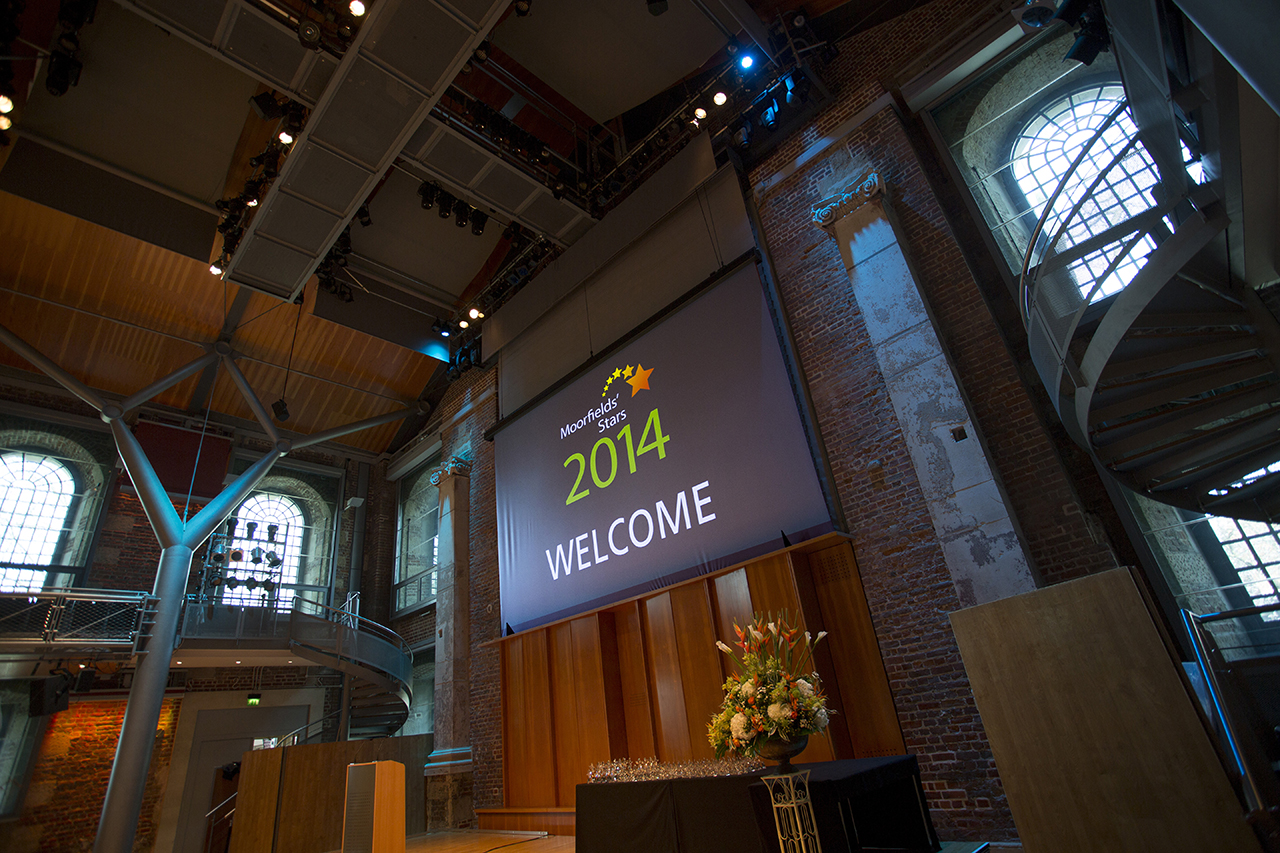 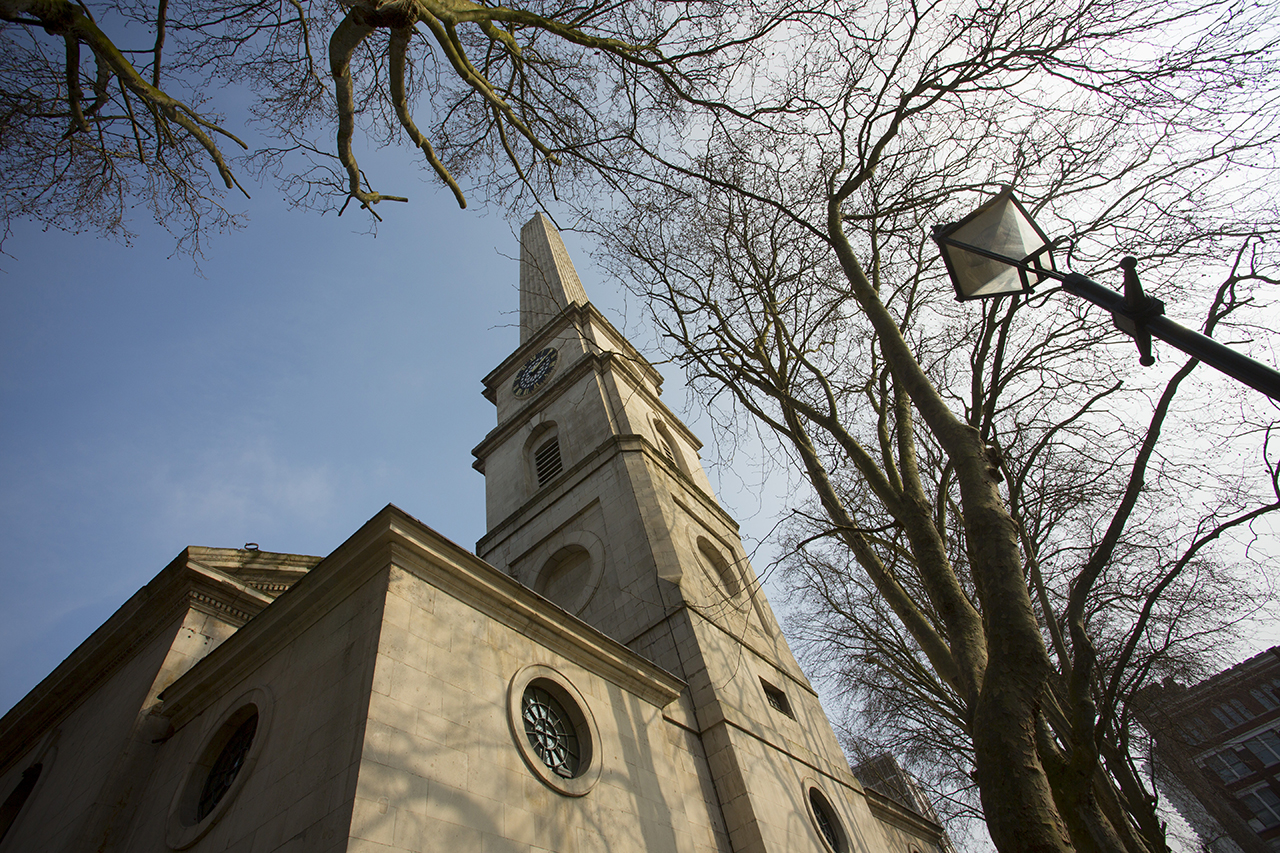 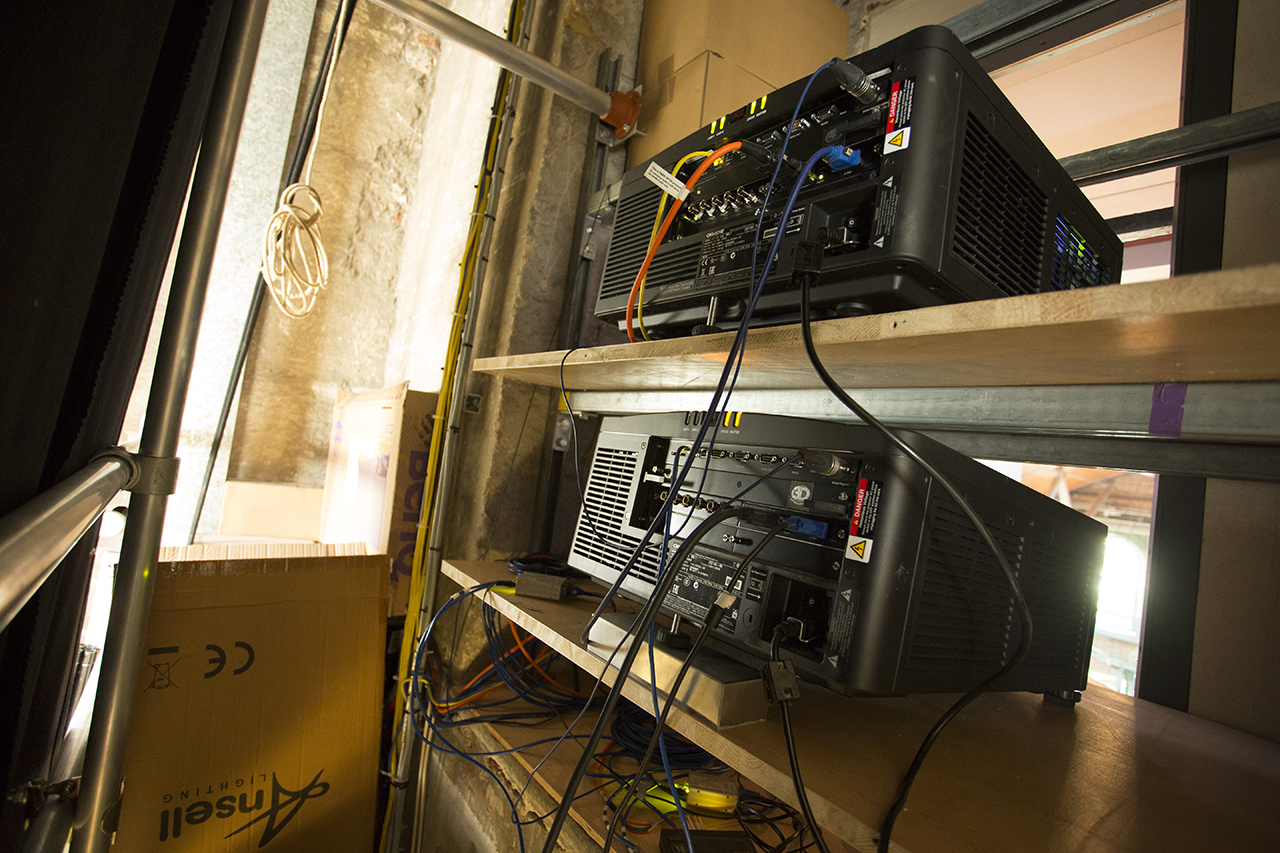 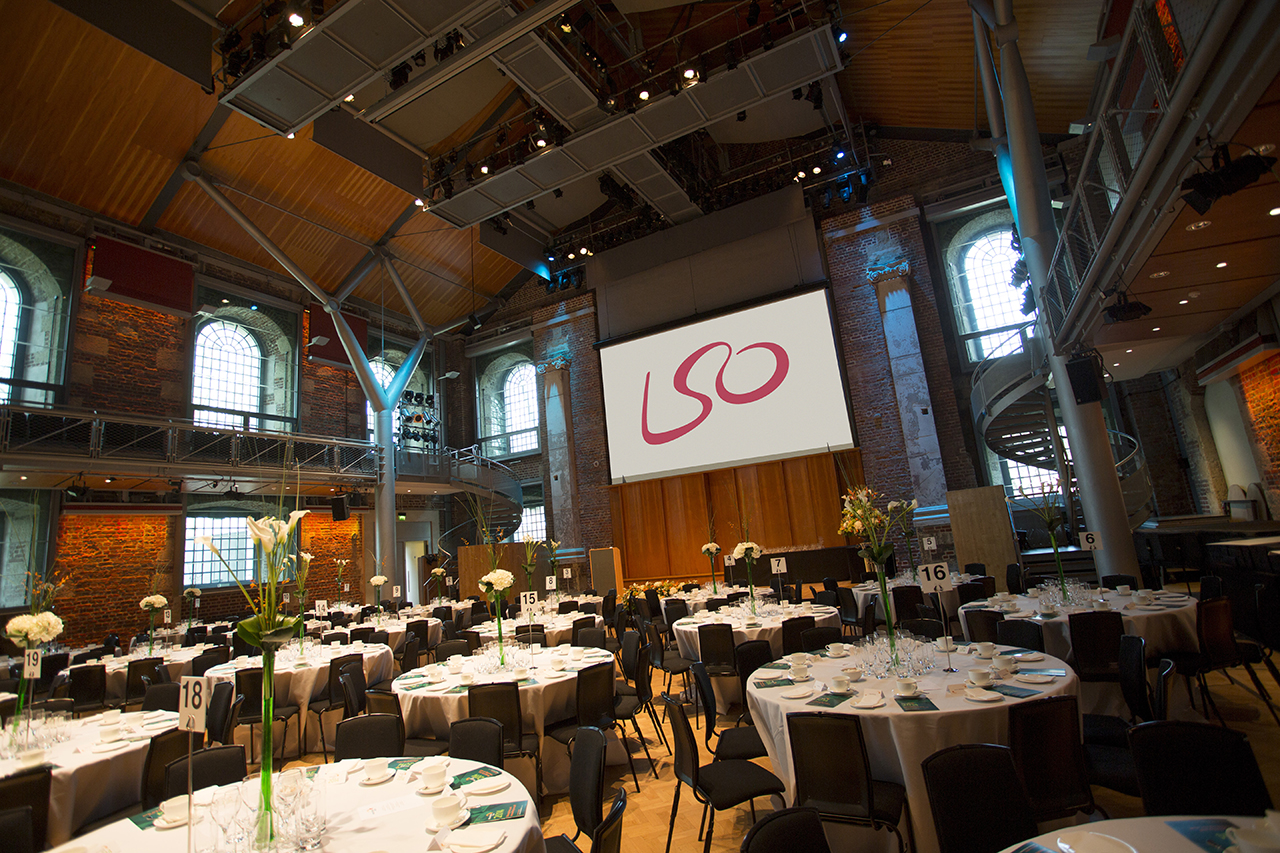 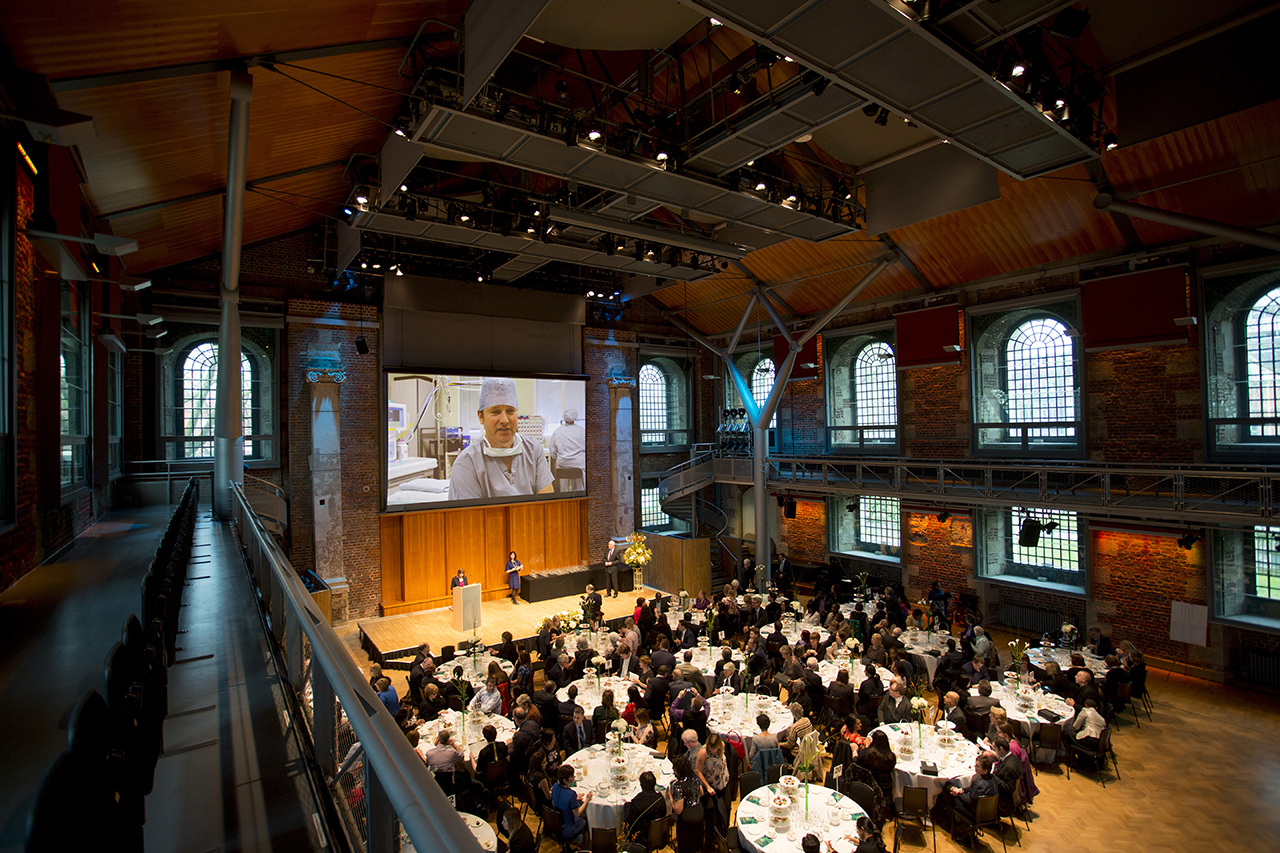 St Luke's Church — one of Nicholas Hawksmoor's famous six baroque London churches of the early 18th century, reopened as LSO St Luke's by the London Symphony Orchestra in 2003 — has upgraded the AV infrastructure in its central Jerwood Hall with latest-generation Christie 3-chip DLP projectors and a new 7-metre drop-down screen.

Yet the real story is that, thanks to the work of original restoration architects Levitt Bernstein, the technical team secured permission to cut through the original brick in this Grade I-listed building to create a stone-edged aperture, thus enabling the projectors to operate from a platform on the other side. “We had to order samples from the same quarry used in the restoration in order to match the original stonework,” explains Ramsden.

Today the venue hosts the LSO's community and music education program, LSO Discovery, and while the facility has always operated projection video, the previous solution had been far from ideal.

This is an environment where some events depend on silent operation, yet the original projectors had to be set in a large sound-reducing box, mounted on four scaffold legs out in the Balcony mix position. “It was somewhat unsightly to put it mildly,” mused Ramsden. “Even English Heritage agreed.” With the facility enduring an annual two-week summer shutdown for technical upgrades and essential maintenance works — made possible with the aid of a generous grant from the Arts Council — he decided it was time to act, purchasing the Christie HD projectors and redeploying the old devices elsewhere.

“We made a hole in the 700mm thick wall, put in an access platform and simply stacked the projectors on two shelves,” he continued. “ Now there is no noise whatsoever and the quality of the picture is first class.”

The projectors are controlled via the IP over Ethernet network, so that there is no need to make difficult excursions up to the access platform to execute manual changes.

Evaluating all the options

However, it was a long route that led the Technical Manager to this solution; it began when he attended a demo at Christie EMEA's Wokingham HQ with his counterpart at the nearby Guildhall School of Music & Drama, David Foister, who was also seeking a Christie solution. Having spoken to Chris Britton from Christie distributor, Audio Visual Machines (AVM), a year later he was ready to consider options. Pixel Projects' Keith Morris duly arranged a demonstration of the short-listed projectors, in conjunction with AVM.

“By now I had a narrow idea of what we wanted — a certain brightness, a certain resolution, and we were also thinking in terms of noise because at that time we didn't have a budget or the permissions to knock through,” he explained. “We had three machines we were evaluating, using our original projectors as a reference, and the additional brightness made the old projectors look really inferior.”

Ramsden says that he started “to look less at the technology and more at the picture quality”, but in the final analysis the decision came down to color rendering. “We compared the rendering with our own broadcast reference monitor — the HD14K-M was 100% accurate, so we opted for that.”

Reviewing the features available in the projector, he says the Intelligent Lens System (ILS) was vital “otherwise we would permanently be up and down the ladder” and the lamp eco-mode was a further bonus.

Ramsden admits that the ability to site the projectors remotely behind the newly-created aperture — in a building that had been closed by the Church of England 55 years ago after falling into dilapidation — has proved to be a major advantage. “It enabled us to eliminate the conflict between noise and image,” he explained.

The projector solution offers plenty of flexibility for all eventualities. While one HD14K-M projector is focused on the large 7-metre screen, which drops to cover one of the main windows, the other is generally aimed at the smaller 4-metre screen, set at the mid-point of the room, used when the space is configured to half size. The second projector can also be used either as a ‘hot' back-up where seamless operation is essential, or each can respectively be set for 5:4 and 16:9 HD aspect ratios — alternatively they can be overlaid where super brightness is required. Finally, the ability to run the projectors in single lamp /economy mode reduces overall cost of ownership.

With the move from SD to HD, most video content is now sent to the projectors using PlaybackPro running on a Mac Pro with a RAID hard drive system.

At the rear of the hall, retractable seating can be brought into play, accommodating a maximum of 412 people (when it's configured in concert mode) or 180 for high-end dinner with stage and reception area. However, Steve Ramsden emphasizes that the Jerwood Hall is not sufficiently large to accommodate a full symphony orchestra performance with audience — it is a rehearsal space only.

Nevertheless, in addition to LSO Discovery, there will be many beneficiaries of the new projection set up. While some concerts are recorded, both for BBC Radio 3 and their own web streaming and educational use, the facility also hosts private concerts, conferences, wedding receptions, filming and recording.

To complete the audio visual upgrade (and further optimize the projectors), a new 7-metre screen from Screen International has recently been installed at LSO St Luke's by Chris Hitchens of Screenchange.

The acid test for the Jerwood Hall is provided at the annual hosting of the Association for International Broadcasting (AIB) Awards. “It's video critical — we have a room full of broadcasters so everything has to be spot on or else it will be noticed.”

Thankfully, the latest integration meets everyone's expectations. “Although we have motorized blinds on all the windows, people tend to prefer natural light,” concludes LSO St Luke's Technical Manager. “And, unlike our previous projectors, the Christies will cut effortlessly through the ambient light so we no longer need to use blackout other than on critical occasions. The technical professionals have been very happy with the result.”

LSO St Luke's is an 18th-century Grade I listed Hawksmoor church, restored to become the home of the LSO's community and music education program, LSO Discovery. While the Jerwood Hall hosts regular creative sessions, a constant flow of groups make music in the Clore Rooms below. As well as LSO rehearsals, the venue plays host to a diverse selection of concerts and has seen artists and groups perform from across the spectrum, from Elton John, Annie Lennox and Robbie Williams to the London Sinfonietta, Aled Jones and Evelyn Glennie. The venue is also used for corporate events or dinners. LSO St Luke's is located on London's Old Street.