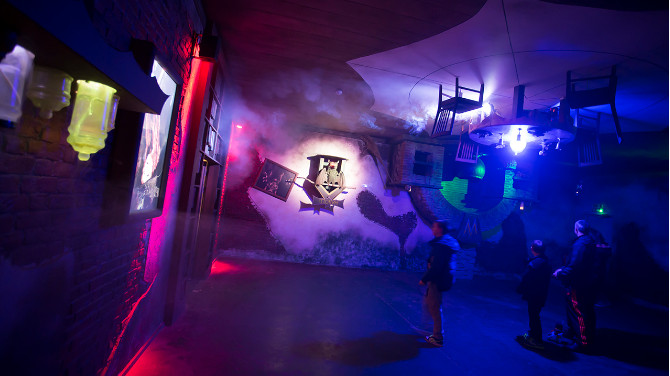 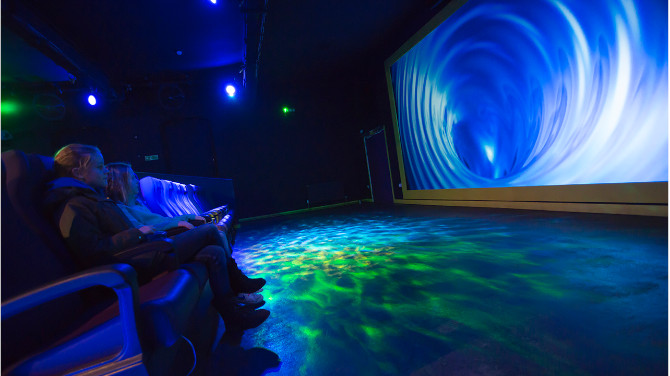 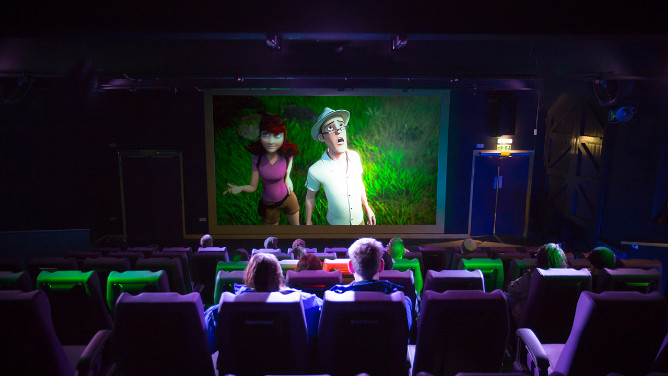 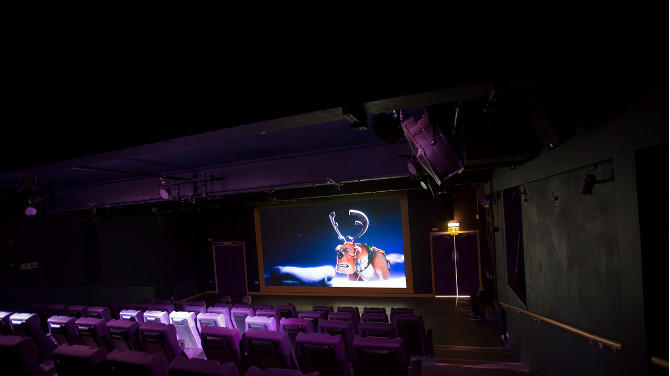 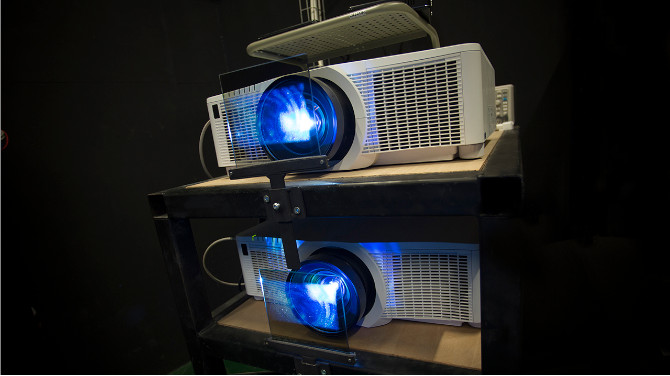 Two of Christie’s new Q Series WUXGA projectors have been specified to help drive a 4D motion ride, at one of the UK’s most celebrated visitor attractions; unique features made the projectors the perfect solution for a very wide screen in limited space.

Theming contractor, Saturn Imagineering, specified the devices — the first DWU951-Q to be deployed in the UK — for The Lost World, a brand new 84-seat cinema at the Wookey Hole Caves in Somerset. This has been designed to further extend the ‘Witch of Wookey’ legend into the 21st Century, with state-of-the-art effects in a spellbinding show that culminates in an exciting multi-dimensional theatre experience.

Along with The Witch’s Laboratory pre-show it forms a combined 20-minute experience, which complements the many other attractions at the site. The Saturn Imagineering team was responsible for the concept design and build of the cinema with moving seats, wind, water and lighting effects as well as the pre-show.

“Christie is our preferred choice of projector and our AV installer wouldn’t specify any other brand,” stated Saturn Imagineering MD, Simon Pickard. “Christie is well known and respected for producing high quality kit.”

Fitted with a pair of 0.8-1.0:1 ultra short-throw zoom lens they are ideal for applications such as visitor attractions, where space is at a premium and a widescreen image is presented for off-axis viewing.

“The unique lens was of major benefit to them in this instance,” states Brittan. “Other advantages of the projector are two sets of colour wheels which can be instantly switched without removing and replacing; portrait projection capability; quietness; XGA / WXGA / WUXGA / HD resolutions; edge blending and warping capability; HD Base-T connectivity; wireless presentation and projector control via iOS mobile devices.” The ability to run in portrait mode is another USP of the Q Series.

Via passive glasses fitted with polarising filters, visitors are treated to the vivid colours from passive projectors which Christie says sets an industry benchmark for brightness and flexibility in this category.

Fed from an Alcorn McBride show control system, the projectors are stacked on a metal custom stand, and suppliers AVM assisted with the complex lens shift to line up the pixels over the vast 5m x 3.5m canvas and enhance the sense of realism.

After a great sense of anticipation, the ride was officially opened by the Mayor of Wells, in readiness for the school holidays.

Daniel Medley, Director at Wookey Hole Caves said: “Some visitors were given a sneak preview as we fine-tuned the complex electronics of the computer-generated show and special effects. At £1.5m we believe it is the biggest single investment in tourism in the South West this year.”

Simon Pickard added, “Wookey Hole is a unique attraction in a wonderfully atmospheric setting and with some fascinating stories to tell. It couldn’t fail to inspire our creative ideas and designs which we have been able to deliver with a host of state of the art pre-show and screen theatre effects. We are all delighted with the results.”