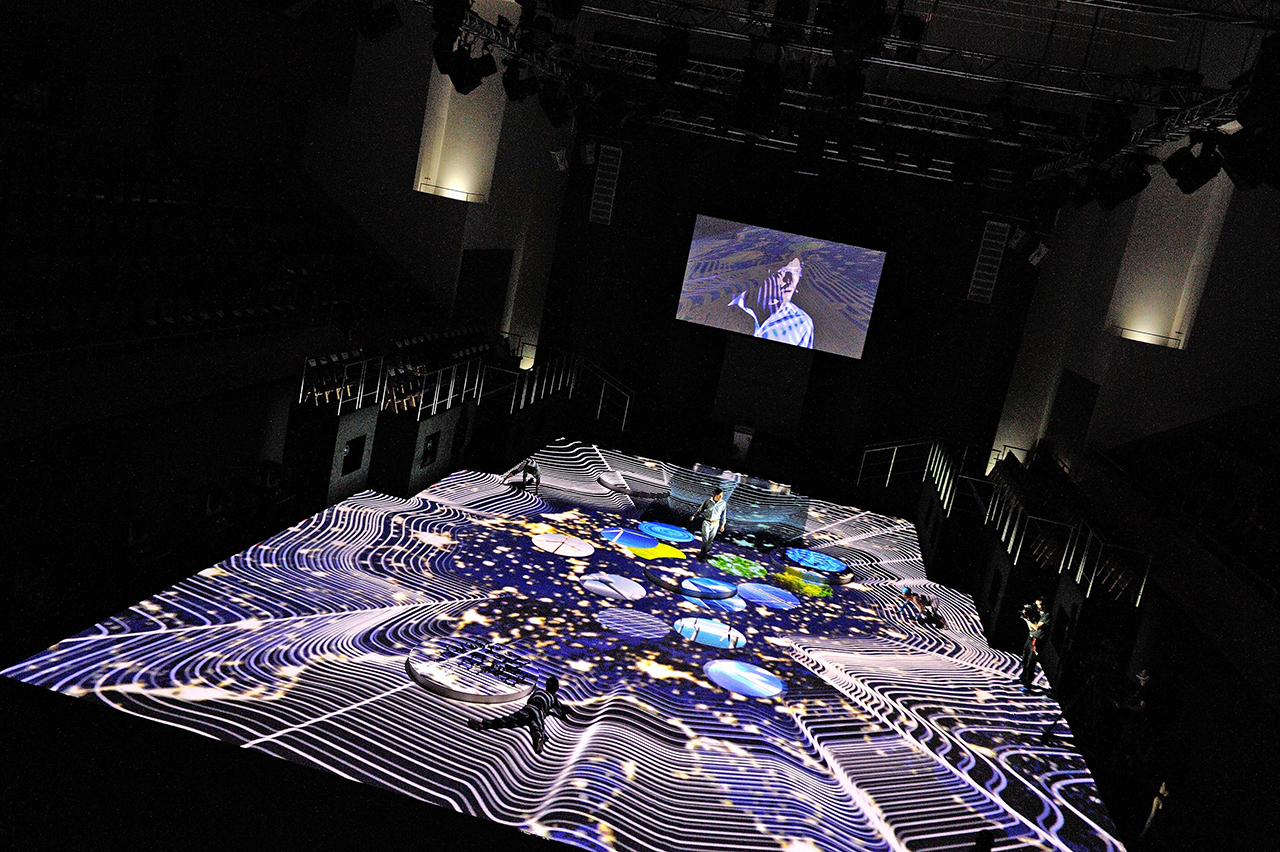 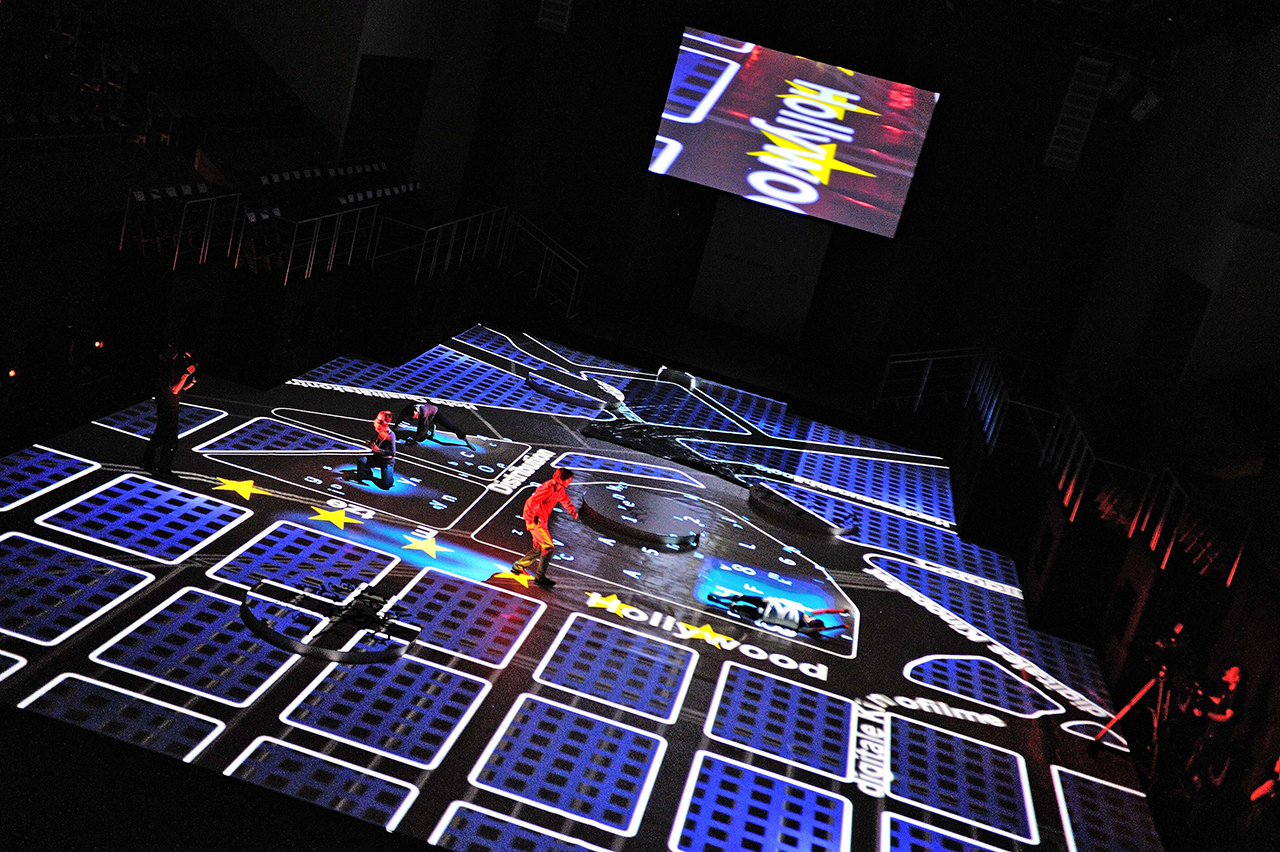 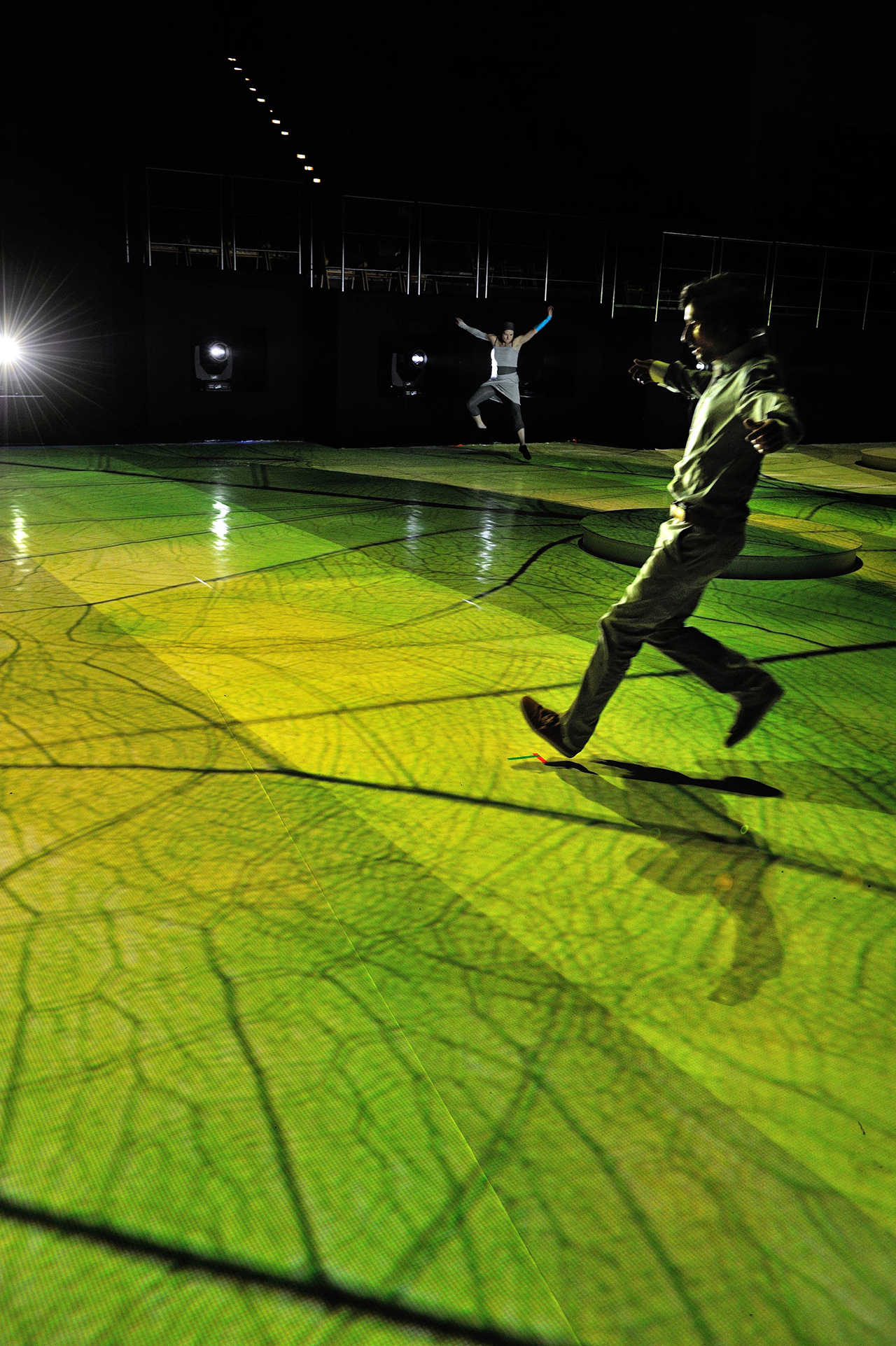 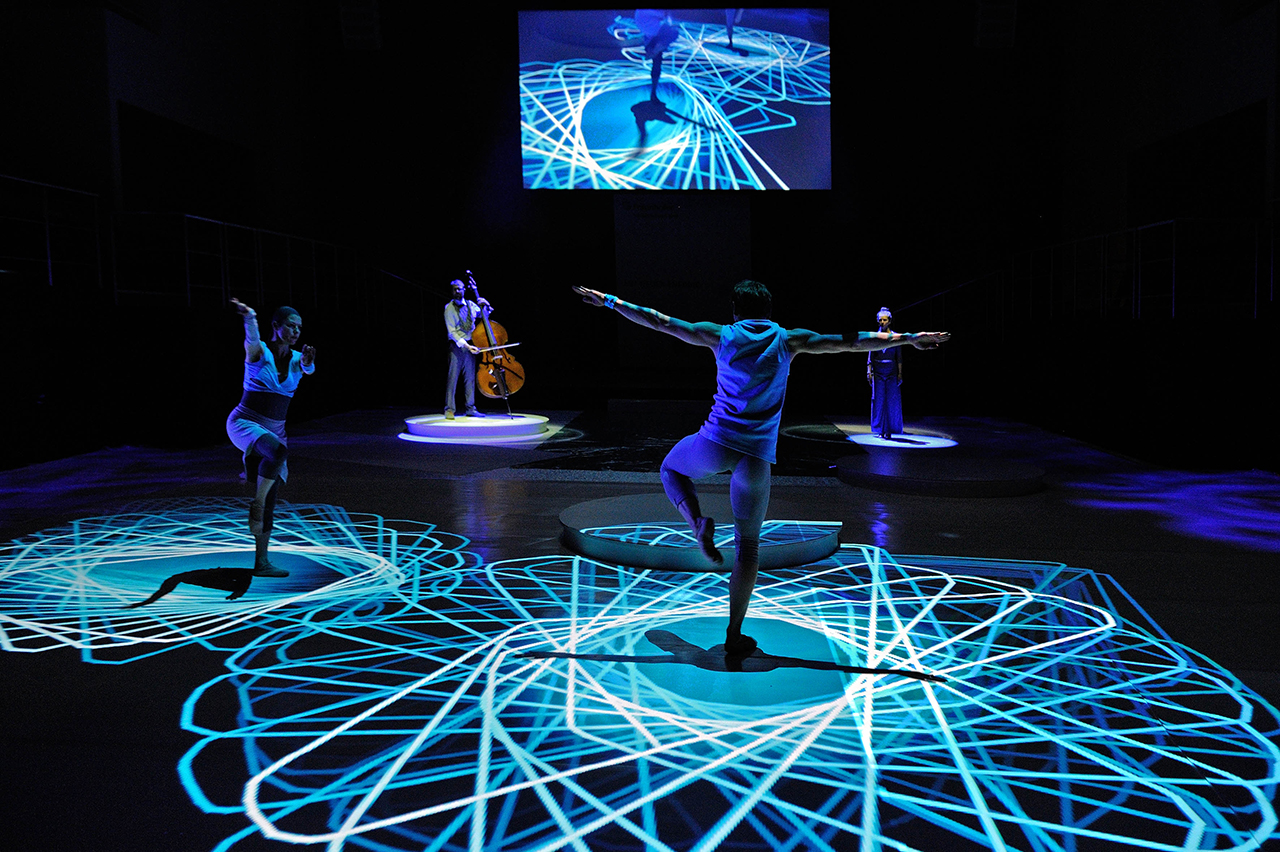 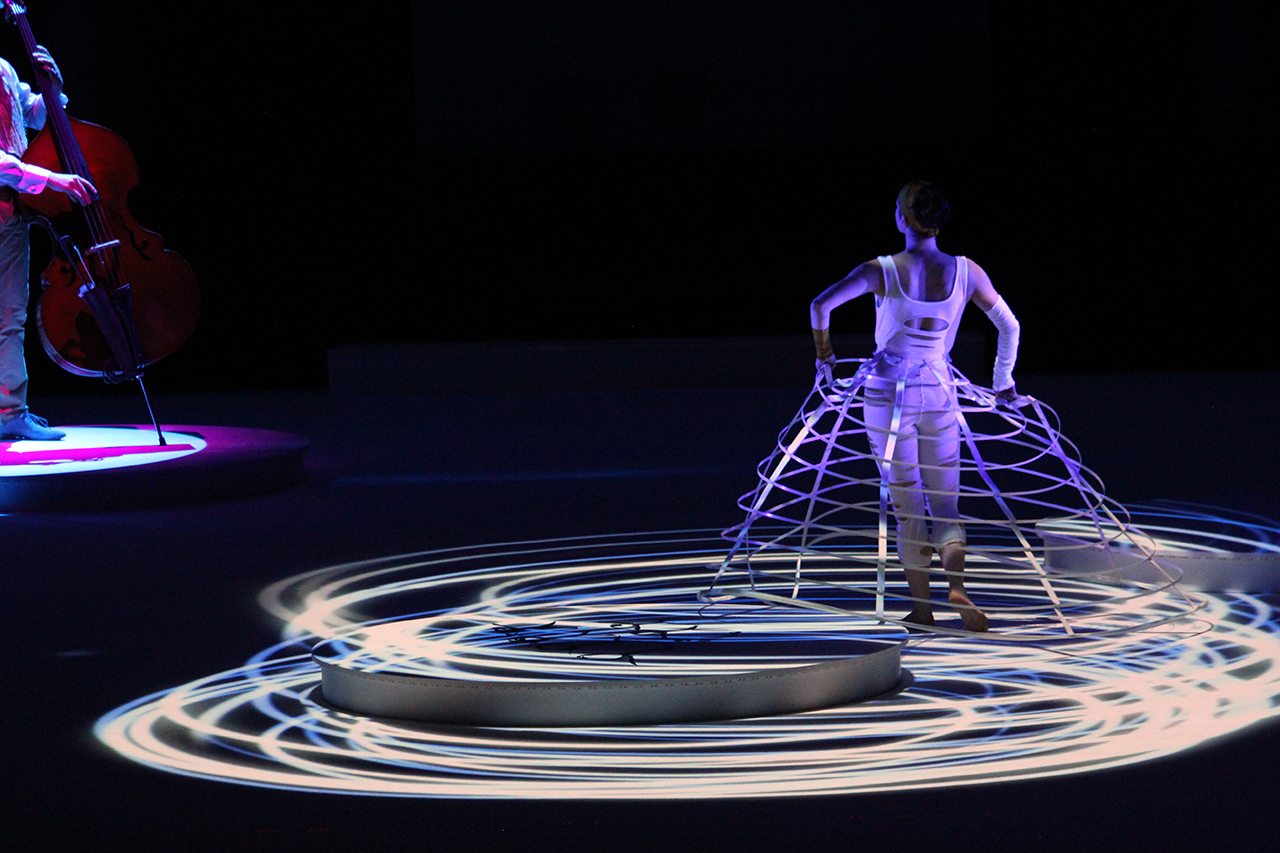 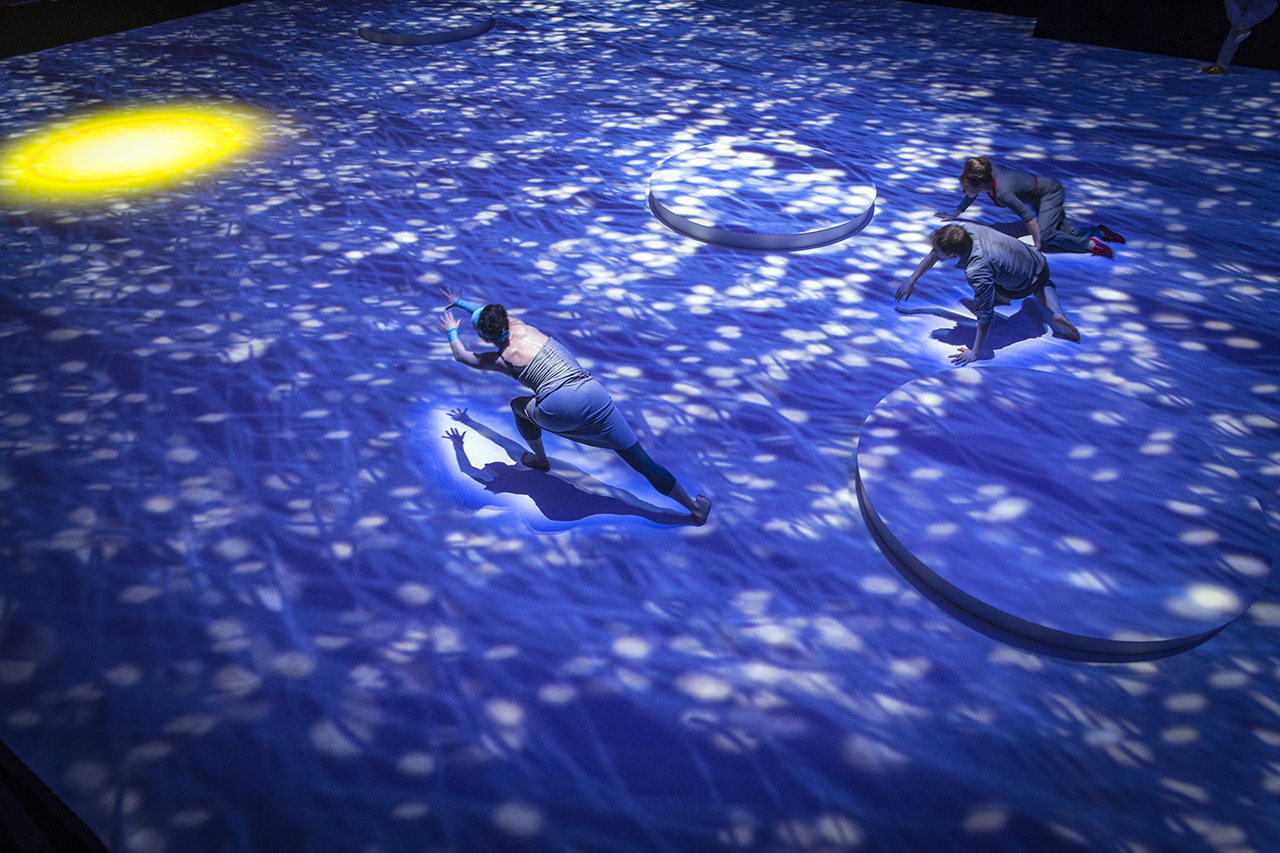 Fraunhofer is Europe’s largest application-oriented research organization and each year awards prizes to four research teams for outstanding scientific achievements. The 2014 Awards Ceremony was such a dazzling affair that the event strategy itself won multiple awards. Centred around an elaborate ground projection and live performers called ‘Energy Space’ it’s particularly apt (for an organization that so actively promotes practical innovation) that the top-down projection was itself a technical challenge to master.

The 2014 Fraunhofer prize award ceremony (held in Freiburg) focused on the interplay between energy and innovation. The host duly proclaimed the annual conference slogan to be: “With new energy”, and the 700 invitees from the financial, political and research sectors at Freiburg’s Konzerthaus could take these words literally: The centrepiece of the show was a stunning, 15 x 20 metre ground projection that could be walked on and was lowered to 4 metres below the spectator level. It was achieved using a combination of pre-recorded and interactive video content, supported by live performers. The interaction between the projection and the performers achieved extraordinary effects. It was an artistic way to bring the public, who were watching around the projection area, closer to the presented research projects.

The design and staging of the interactive show came from onliveline GmbH, with Freider Weiss providing the interactive content and Heinz Stricker (media3) producing the video content. Christie’s longstanding partner, b.MEDIA GmbH, was responsible for visually interpreting this demanding project. b.MEDIA GmbH decided to use theRoadster HD18K and Roadster HD20K-J to help make this a reality.

A total of eight Christie® projectors were used, hung from suspension elements at around 11 metres and wirelessly connected to the content via interactive remote media controls. The projection area on the ground comprised three individual parts that were merged into a single stage using a soft edge process. Two Roadster HD18K projectors were used for each part, forming double projections. In order to achieve this, each projector was assigned its own signal, so that each image could be adjusted individually. Two more Roadster HD20K-J projectors were used as part of an interactive media system that responded to the movements of the performers.

“The difficulty with this setup was that it was a top-down projection. This meant that the projectors had to be able to project downwards with no obstacles, and without this causing problems with the projector air circulation or xenon lamps,” says Ronny Zielke, CEO of b.MEDIA. The HD18K and HD20K-J were chosen for this, as they can reliably create this kind of projection without any interference. “Being 3DLP projectors, they have the light output needed to display attractive colours even in unusual setups.”

According to Zielke, an additional difficulty lay in the fact that the projectors were operated at around 11 metres above the ground: “Once the projectors had reached their final positions, mechanical adjustments on them could no longer be made.” All optical adjustments therefore had to be made on-site by the content operator. This was to ensure that the images could be superimposed while being projected from this height. The projectors had to be operated from the ground, for example when shifting the optics. WLAN and control software on a PC were used to do this, with minor variations corrected by media programming.

Given the complexity of this unusual projection, the device setup was tested on b.MEDIA’s own testing site in conjunction with the agency for the project. “We had previously implemented many different projects using Christie projectors, so we already knew how reliable and easy to use they were. The projectors impressed us again in this project,” says Zielke. The hard work paid off: The onliveline concept received multiple awards including a Gold FAMAB AWARD in the “Best Corporate Event” category, a Gold EUROPEAN BEST EVENT AWARD in the “Best B2B Event” category, and a Special Award for Best Technical Innovation.

There is another projection that should also get a mention. It used two Roadster HD12K projectors. On a six-metre image wall above the speaker’s desk, spectators saw live images of the award ceremony, details on the projects being presented, and interviews with all those who received awards. This projection used two HD cameras and lenses with 42x and 87x magnification, and a wireless HD camera with a wide-angle lens that moved around the hall to show the events at the project tables and the interviews in the room.

Petra Lammers, CEO of onliveline, talks about this successful event: “Presenting energy as a design process was not just a staging idea, but also one that was equally relevant in terms of its technical implementation. The interplay between all the project participants and the projection technologies went extremely smoothly, and the idea translated into a vivid experience.”