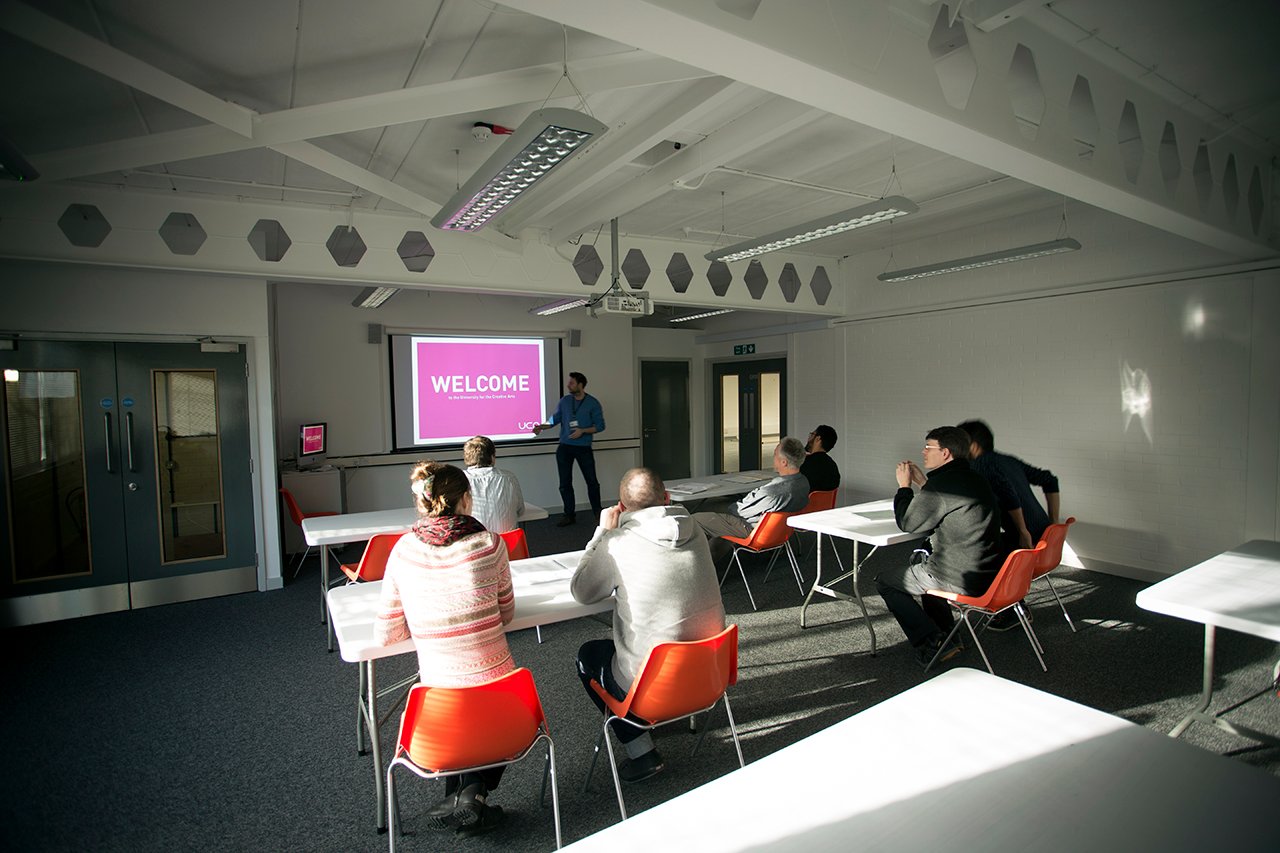 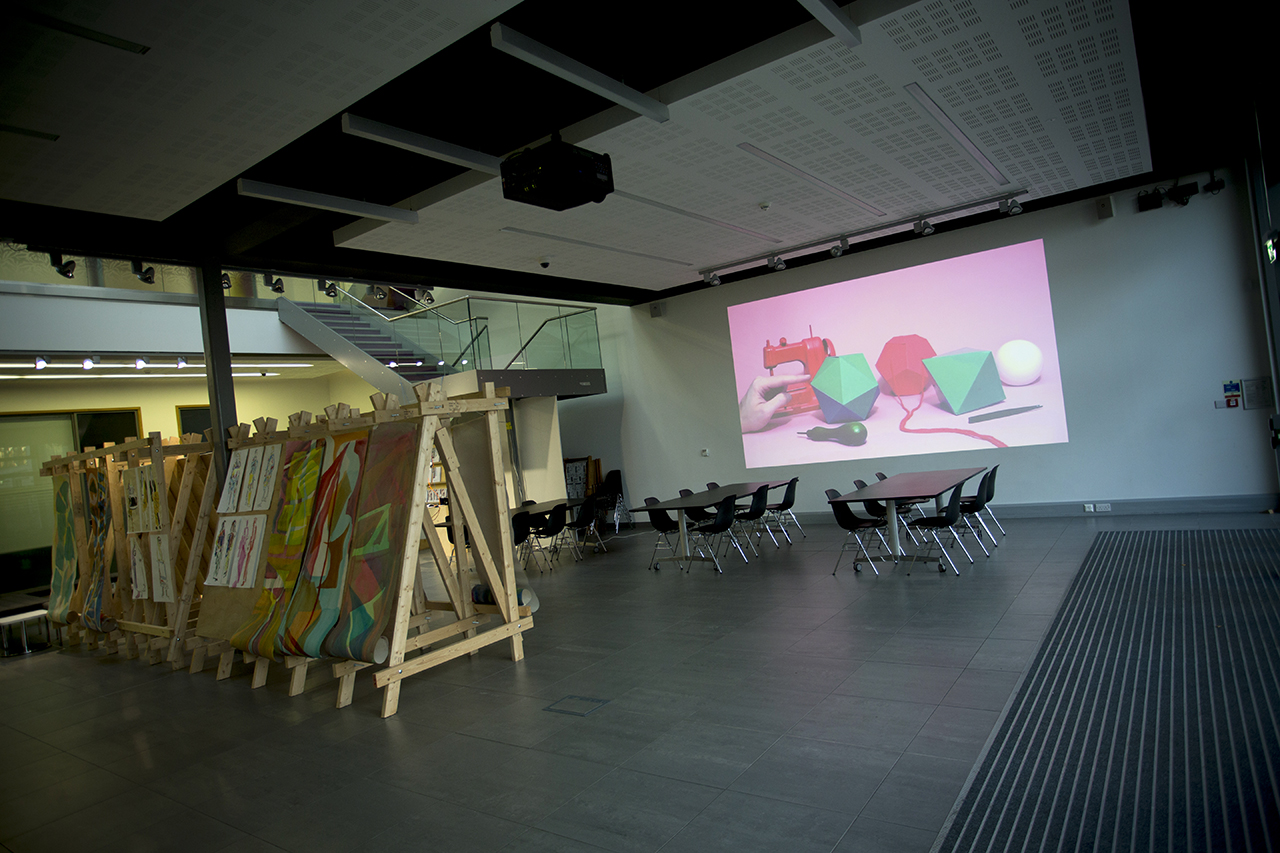 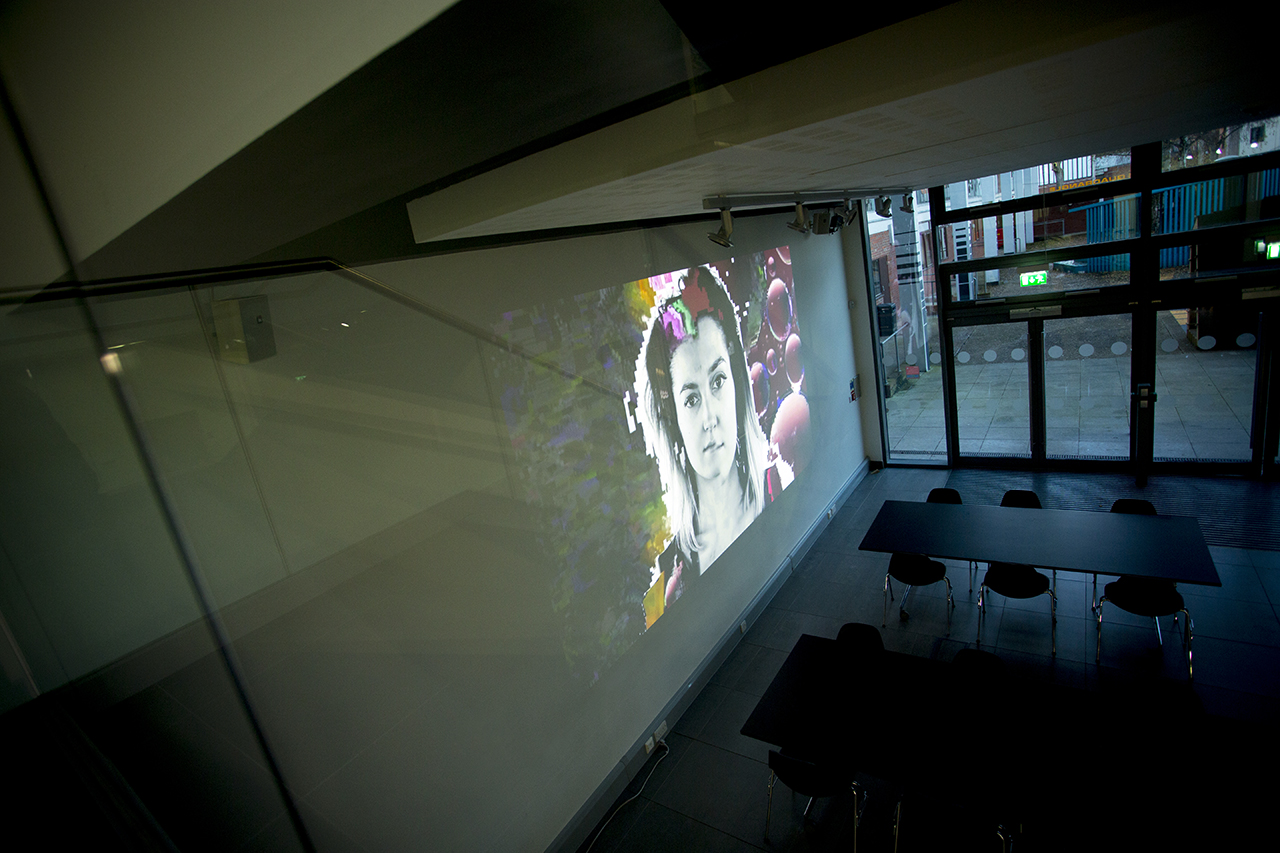 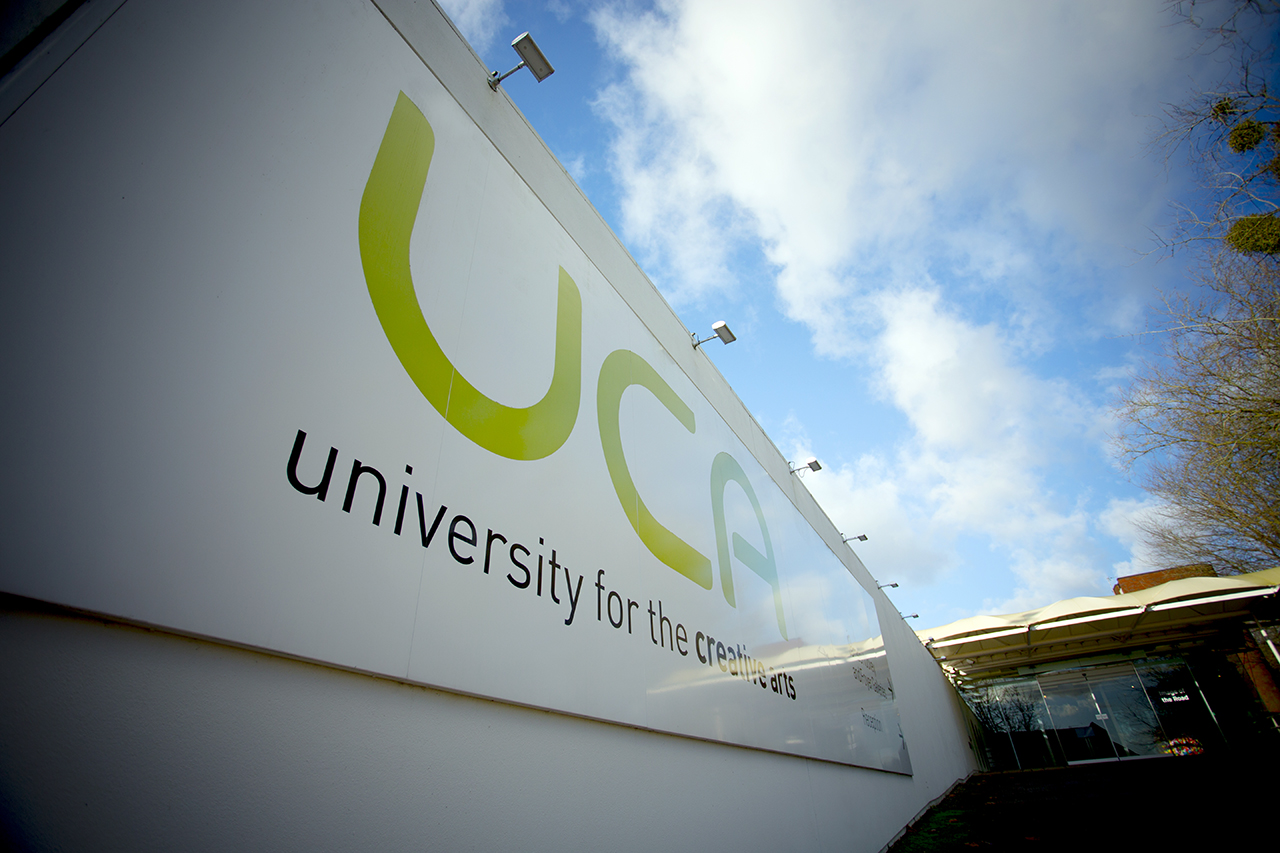 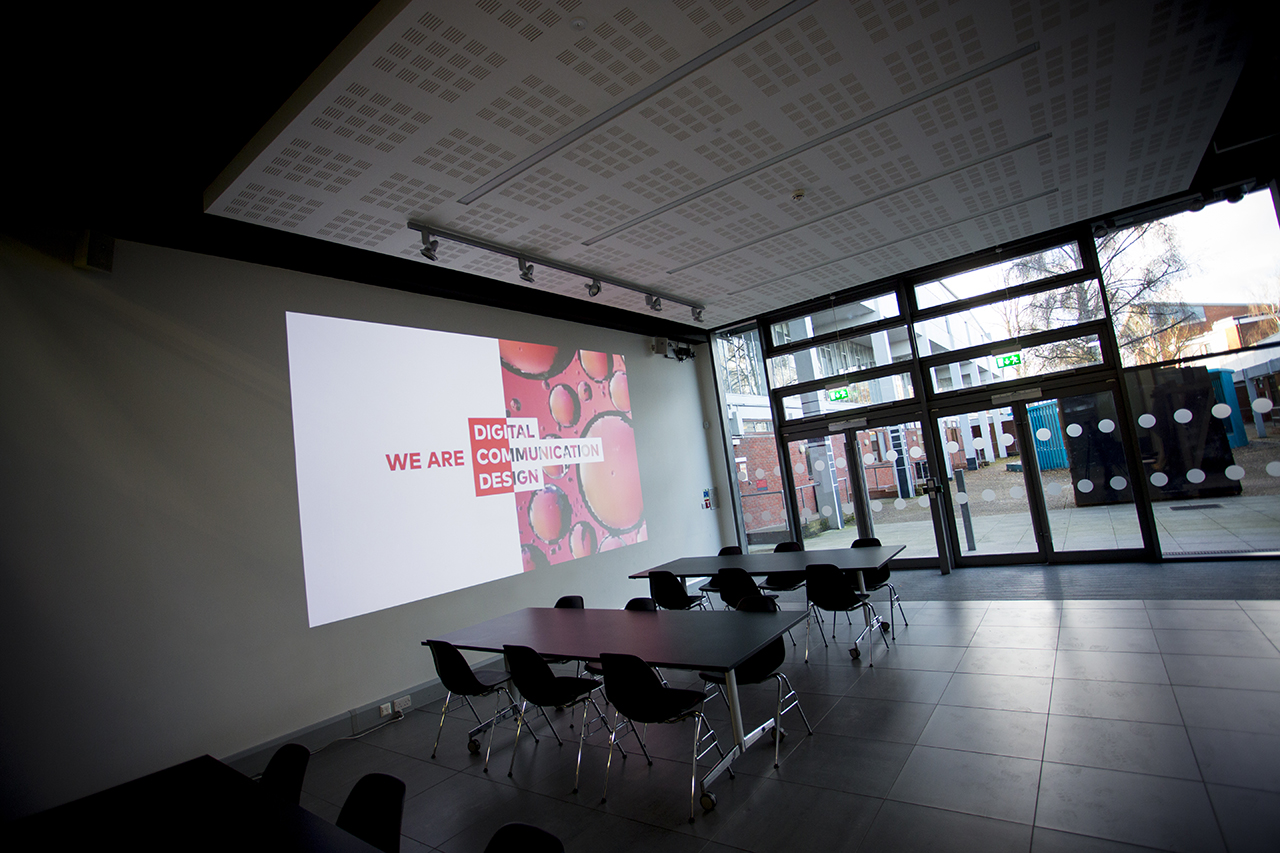 Christie has provided the educational sector with projectors for many years but, a recent upgrade at the UCA (University for the Creative Arts) was a great test because these students followed a curriculum where they were actually learning about advanced digital screen arts, photography and allied technologies; so there were discerning users to please. However, student enrolment shows the efforts made by the UCA to upgrade have really paid off, in fact there was a boost in new student uptake.

The UCA numbers Zandra Rhodes and Tracey Emin among its alumni. With its largest campus in Farnham, Surrey (there are now four) it has expanded exponentially from the original Farnham School of Art at the end of the 1960s into the consortium known as West Surrey College of Art & Design.

At Farnham alone there is a roll of 2,500 studying a wide range of creative arts subjects including Fine Art, Photography, Film, Graphics, Journalism and Advertising.

When its quest for University status succeeded six years ago, it was only the technical infrastructure that was holding it back.

The University’s Resource Coordinator, Tipu Miah, admits there was growing unrest, particularly among the photographic department, about the failure of old-technology office projectors (which were different in every room) to deliver transparent colour-rich images.

The move to replace their stock, and standardise on a Christie platform throughout the teaching rooms and lecture theatres, began after the University took on dedicated AV technician Thomas Gilley three and a half years ago.

As Miah recalls, “We debated the problems we were having at the campus. We identified that were 20-30 AV-based teaching rooms, which accommodate classes of around 25 students, and pretty much all were configured differently, meaning that students had to learn in different ways.”

As the University was starting to embrace film production this was unsatisfactory, requiring urgent action to be taken.

And so Thomas Gilley, with a background in corporate AV hire, was tasked with writing a bid to upgrade all AV units—as a result of which UCA was awarded £150,000 of capital funding.

“We decided to see how much equipment this would buy us and looked at two projector brands—one of which was Christie,” he explained. “I knew how highly regarded the brand is.”

Soon he and the Resource Coordinator at Epsom, were invited to a demo at Christie’s EMEA HQ in Berkshire and the model that hit the best price / performance ratio was the LW41, a bright, affordable 3LCD WXGA device, purpose designed for higher education.

“Everyone was very impressed,” recalls Gilley. “The rooms don’t want to be plunged into darkness in the middle of a lesson for projection purposes—but the LW41’s were high brightness and the colours just pinged off them. Everyone loved them—so we started the roll out.”

Other advantages of the Christie projectors, he said, was that they fitted the existing security cages, providing a like-for-like swap … but the icing on the cake was unquestionably the four-year warranty.

The order was delivered in tranches by their preferred supplier, Reflex Ltd, and sourced from Audio Visual Material (AVM), Christie’s exclusive UK distributor for business projection, display and processing products.

Students who know their projectors

“The students wanted better contrast and colour—but one of the other criticisms was that the old projectors were also inaccurate,” pointed out Tipu Miah. “The new Christie projectors demonstrate far superior colour rendering, which students have jumped on. Some of the old projectors are still there so people can see the stark contrast in performance with their own eyes.” Also forming part of the spend were Draper 16 x 10 retractable front projection screens.

The integration, which the University carried out itself, has seen them move into the digital world (while at the same time retaining old 16mm and 35mm projectors in the film department). As Thomas Gilley confirms, “Everything is now digital. In each Unit there’s a Mac Mini, BluRay player and local VGA, HDMI and composite input—because we still have legacy equipment.”

All content is in uncompressed Apple Pro resolution, with a Blackmagic server streaming all the footage to the projectors.

At the same time, the UCA has developed its own custom AV panel, designed to be easily operable. “We wanted to simplify everything, with no remotes,” explained Gilley. This involved upgrading the original outmoded controller with a more advanced Extron solution, with intuitive GUI and a 4U rack beneath housing the switcher, amplifier and BluRay player — all accessible to wheelchair users.

Gradually the workshops, lecture and seminar rooms have been refitted, enabling laptops to take advantage of the widescreen WXGA (1280 x 800) resolution.

A gallery space for student shows

But the University has since gone further, acquiring a Christie Mirage HD10K-M fitted with 1.25-1.65SX/1.16-1.49HD ILS Roadster short throw lens. This was used recently to rear project onto an 18ft x 10ft screen surface to supercharge the University end-of-year Graduate Show.

“The campus became a white-wall space gallery and this created a real wow factor in the James Hockey Gallery,” said Gilley. “With minimal lens shift it was ready to go and projected show reels between 10am-4.30pm for two and a half weeks. We had up to 3,000 visitors and this was the first thing they saw; in fact the quality of projection was extremely well received, particularly by the Film Production course.”

Fired by this success, the Epsom campus simultaneously purchased its own Christie HD14K-M for use in its glass fronted foyer space — but only after it successfully won a shoot-out against another brand.

“The glass front of the reception at the Epsom site means light floods in so we needed a great deal of brightness and colour – as well as high definition,” explains Gilley. “Everyone is very happy with the result and, of course, in the evening, the projector really comes into its own and everyone is very pleased with the results.”

But most importantly, as a commercial level investment, the Christie projectors are really delivering, as Tipu Miah explains. “We needed to show we could compete with other universities and prove the money was being wisely spent. As a result the Film Production course has exploded to 120 students and Photography is also proving increasingly popular, with 100 students registered for the first year.

“Standardisation on Christie has made a lot of sense,” he continues. “From a maintenance standpoint, while we have a stock of lamps and accessories, with a four-year warranty we don’t need these. Also, having different equipment would make Health & Safety checks more difficult, to carry out; the result with repetition processes is that students learn faster and we get called out less.

“We have set out to find the best equipment — and I believe we have done it. The Christie projectors are doing exactly the job we want them to do.”

UCA is in the midst of a ten-year plan, which is likely to see further expansion and departmental reconfiguration (and move towards DCI compliancy in their 80-seat cinema).

Meanwhile those studying Textiles through to Computer Games Arts at UCA can rest safe in the knowledge that their white wall image magnifications will be rendered with high contrast and acuity, faithfully reproducing the colour saturates of the original art.