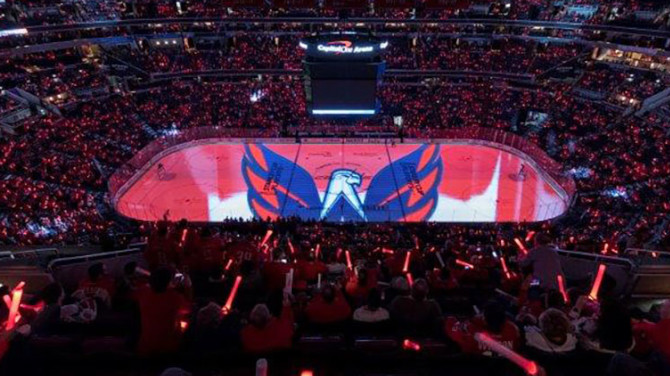 “With an arena renovation coming up, our goal was to enhance the fan experience,” explains Hunter Lochmann, senior vice president, marketing & brand strategy, Monumental Sports & Equipment. “And we have always had the projection system at the top of our list.”

The arena in question? Capital One Arena in Washington, D.C., home to both the NHL’s Washington Capitals and the NBA’s Washington Wizards, a space also regularly used for large-scale live music events.

Monumental Sports needed a multi-sport projection system to accommodate both professional ice hockey and basketball games, with 4K content and projection mapping capabilities, and be installed in a way that accommodates large concerts. And they needed a turnkey solution that included everything from projection hardware to content processing and high-impact visuals.

“While most teams decide to work on this stuff in their off-season planning, Monumental Sports decided that with the Capitals being so red hot in the 2018 season, that now was the time to bite off a projection system,” shares Eric Gazzillo, producer, Quince Imaging. “Since it’s not really possible to stop mid-season to install a permanent system, we decided on an immediate temporary install for the NHL’s Stanley Cup Playoffs, and a more permanent install in the off-season.”

Quince Imaging created a turnkey solution with several Christie® products. With an incredibly tight timeline—just a couple of weeks’ notice—and only one day on-site for installation, Quince knew they could count on Christie.

“This is where Christie products really shine,” says Gazzillo.

“The one key thing that helps us meet these deadlines consistently is having products like Pandoras Box® and Boxer,” says Davis. “We know how it works. We know we can rely on it to deliver what we expect. That’s why we like it.”

“We fully use the real-time compositing and warping tools of Pandoras Box,” explains Gazzillo. “Once you lay down that canvas of pixels and light across the hockey rink, you’re harnessing the power of Pandoras Box to quickly transform into a basketball arrangement with just a few button clicks.”

“Widget Designer has been very valuable to us and to the teams because we’re able to create those custom interfaces and connect them to anything,” shares CJ Davis, creative director, Quince Imaging. “Widget Designer allows us to connect scoreboards and all the ribbons and make sure there’s a single button press to fire the intros. We can also create these immersive, multi-screen shows and it’s all in sync.”

“Christie Pandoras Box is something we always like our customers to include. It opens up a world of content, including opportunities to bring fans down to the court or ice and interact in a unique way,” adds Davis. “And because our client invested in a full tracking system, we can do player tracking, fan tracking, even ‘follow-the-Zamboni’!”

With single click, Mystique warps, blends and aligns content across all 12 projectors in a matter of minutes. This ensures that the system is always perfectly calibrated and game-ready, and eliminates the need for time-consuming labor and several hours of dark time to manually adjust the system.

“Game-day operations are crucial,” says Gazzillo. “Keeping 12 projectors in alignment on a day-to-day basis when you have courts switching over and concerts coming through is a fair amount of labor for projection operators. For the most streamlined workflow, Mystique is really the only game in town to ensure a seamless operation.”

For the permanent installation, Quince chose a Christie Terra® controller and transmitters and receivers so they can transmit 4K without compression.

“Talk about a multi-sport set-up. When you go from hockey to basketball, where the ice rink is 4 times the size of the basketball court, you’ll lose a lot of resolution if you just crop your content down to one quarter of the size,” Gazzillo explains. “So to avoid that, we’re running all of the Christie Boxer 4K30s at their native 4K resolution. And to do that, we’re using Christie Terra to make sure that we’re running uncompressed 4K all the way through. That way, when we shrink down to the much smaller basketball court surface, we’re still getting full 4K resolution on the court thanks to Terra.”

“Absolutely,” enthuses Gazzillo. “It’s been so great, we not only have the pleasure of the new projection system, but the Washington Capitals winning the 2018 Stanley Cup! And adding to that excitement is our pre-game show that’s really memorable for not only the fans but the team as well.”

“It’s a little bit of competition for us at Quince Imaging, too,” laughs Gazzillo. “Rink and court projection has been picking up for so long. It’s so mainstream now that if you’re watching playoffs, you’re seeing projection mapping. So you don’t just have team rivalry, but also rival pre-game shows!”