An operatic display of fashion

Conceptual planning for “Thierry Mugler: Couturissime” started in spring 2018 with the museum team mapping out the flow of the exhibition and planning for the inclusion of projection technology. The exhibition is laid out as an opera in six acts, moving from act one, “Macbeth and the Scottish Lady,” through to the final act, “Futuristic and Fembot Couture.” 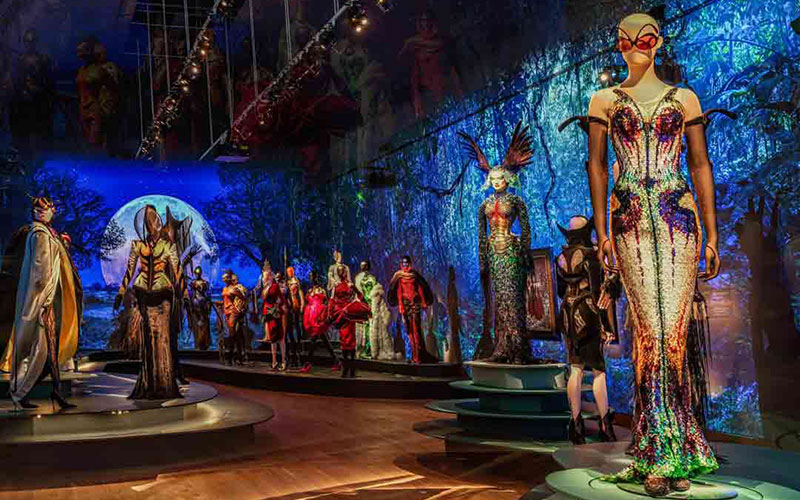 Says Sandra Gagné, Head of Exhibitions Production, MMFA, “The variety of themes and ideas presented in the show required versatile equipment that could lend itself to different atmospheres going from the dark and haunted ambience of ‘Macbeth,’ to the immersive fantastical jungle of ‘Metamorphosis.’ At this stage, the Christie team was of great help in guiding us to the ideal product, as well as helping us with the position of the projectors in the rooms.”

The projection is used in three acts. In “Macbeth,” guests enter the exhibition and are greeted by costumes designed by Mugler for La Tragédie de Macbeth and a hologram of Lady Macbeth created by the multidisciplinary artist Michel Lemieux for 4D Art, Montreal. Says Gagné, “The hologram projection opens the visitors’ route with an enveloping performance; the sleepwalking queen is haunted by the blood she imagines on her hand and she ultimately descends slowly into madness.”

In “Stars & Sparkles: Staging Fashion,” video clips of Mugler’s pioneering work designing runway shows is projected onto a large screen at the end of the room, complementing the dramatic fashions on display. Mugler’s fascination with the animal world is on show in “Metamorphosis,” which required a captivatingly immersive AV experience created by award winning Montreal’s special effects studio Rodeo FX (Stranger Things, Game of Thrones).

“The Metamorphosis section is composed on a scenic immersive environment,” says Gagné. “The projections transport the visitors into the jungle, the desert, and the ocean to discover the flamboyant costumes designed by Mugler. The composition of numerous projectors in the room allowed for a mesmerizing panoramic experience. “ 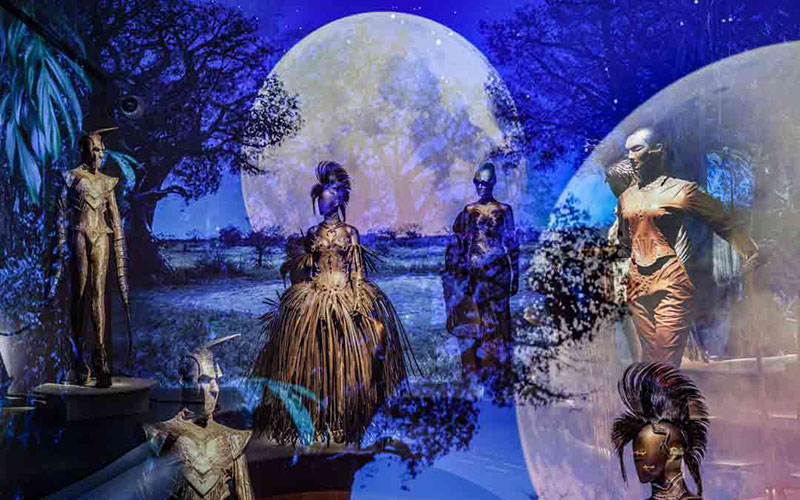 The MMFA required projectors that were high-resolution, yet powerful, dependable and low-maintenance. Says Gagné, “The weight of the projector was also crucial for transportation, as we needed a light yet reliable device, solid enough to withstand transport.” Christie GS Series projectors have performed admirably, with positive feedback from the public and the artist. “The Christie projectors allowed us the freedom to create different immersive environments, while responding to our technical requirements,” added Gagné.

“Thierry Mugler: Couturissime”has been a resounding success at the MMFA during its six-month tenure (March 2 - September 8, 2019). “Projections and immersive visual work allow the visitors to discover the work of Thierry Mugler in a mesmerizing and captivating environment,” says Gagné. “Visual installations are a key feature of the exhibition, allowing a new public to discover the world of fashion design. People of all ages have been appreciating the exhibition since its opening!”

The MMFA’s exhibition, along with the Christie projectors, is on display at the Kunsthal Rotterdam from October 13, 2019 to March 8, 2020, followed by the Kunsthalle der Hypo-Kulturstiftung in Munich from April 3 to September 20, 2020.

“Thierry Mugler: Couturissime” is initiated, produced and circulated by the Montreal Museum of Fine Arts, in collaboration with the Clarins Group and Maison Mugler.