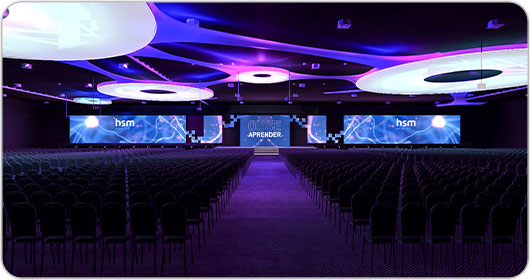 HSM Expo is a forum which brings together leading names in the world of innovation and business and puts them in contact with executives and managers of Brazil’s major corporations in a range of transformational educational experiences. Among the keynote speakers this year were Arianna Huffington, founder of The Huffington Post; Fareed Zakaria, presenter of the CNN program Fareed Zakaria GPS; Eric Ries, the entrepreneur who pioneered the Lean Startup movement; and Hugh Herr, named by Time magazine as Leader of the Bionic Era.

The Insights Auditorium, the event’s main hall, was equipped for the occasion with four LED screens with a 2.9 mm pixel pitch, placed side by side to create a width of 52 meters, generating an awe-inspiring 33 million pixels.

In order to process such a vast quantity of pixels, Infoview brought on board a Christie Spyder X80 featuring 24 inputs and 16 outputs and processing power of 80 megapixels and true 4K resolution at 60Hz.

“We chose the Spyder X80 because it is the only processor able to work with the high resolution we wanted for the event and with the number of inputs and outputs we required, and it all comes in one single machine,” explained Daniela del Corona, CEO of Infoview.

She went on to add that “it allows you to input high quality visuals without having to worry about resolution or bandwidth. In addition, its programming interface is very simple and user-friendly, which gives you a lot of creative freedom and multiple pixel spaces without programming restrictions.” 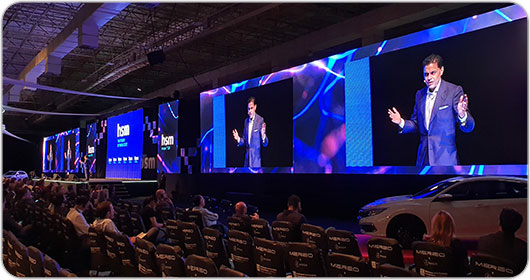 The screens were used to play videos, PowerPoint presentations and animations, which were powered by the Spyder X80 running all the signals and creating multiple PIPs and windows. Two Blackmagic Design 4K switchers with 10 inputs were also used in conjunction with the Spyder.

Infoview also used a Christie Montage II M2C-50 console, designed specifically to work with the Spyder. The console is a playout device that secures a flexible control of the Spyder, allowing for on-the-fly management of PIPs, mixer control and transitions.

“In fact, this was actually our first event using the Spyder X80 and I can safely say that we were more than happy with the performance,” enthused Daniela del Corona. “We already have two Spyder X20 units in our fleet, and I have to say that the migration from one model to another is really simple, which makes the operator’s life a whole lot easier.”

The Christie Spyder X80 is the processor of choice for managing signals in the planet’s biggest displays. World events including Mobile World Congress (MWC), Web Summit, Schneider Electric Innovation Summit, CCXP Brasil and Adobe Summit have placed their trust in the Spyder for their big screens. The processor is also installed on a permanent basis in the auditoriums of major multinational corporations like Telefónica, Audi and Daimler.