Known as the Linjiang Bridge Tower, the six-story structure measures 73.5 meters in height and overlooks the 4-kilometer long bridge that crosses the majestic Yangtze River and Qingyi River. Both the tower and bridge have since become landmarks of Wuhu. 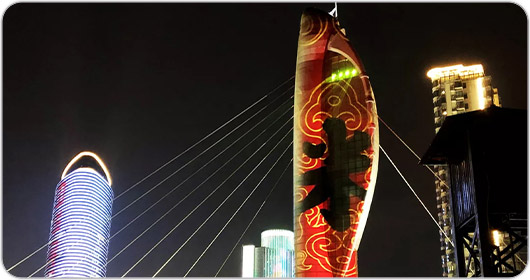 “We are delighted to be involved in the design, installation and delivery of this projection mapping show to emphasize the importance of Wuhu as ‘the hometown of fish and rice’ due to its proximity to the Yangtze River and an important center for rice trading,” said Tony Chen, general manager, Wincomn Technology. “This project demands the best in projection and Christie’s Crimson Series is the natural choice for this large-scale installation due to its ability to deliver big, bright and intensely colorful images for amazing visual experiences. We are impressed with its IP5X-sealed, solid-state laser light source in a rugged and compact chassis.”

Chen noted that the Wincomn team devoted much time to designing the projection contents to accentuate the architectural beauty of Linjiang Bridge Tower, ensuring that the theme and images match perfectly with its renowned fish-shaped façade for maximum impact. Much thought had also gone into highlighting various elements – fish, rice, paddy fields and fish-shaped lanterns – that Wuhu is famous for since ancient times.

He added, “This is the perfect combination of aesthetics and projection elements that strengthen the cultural connotation of Linjiang Bridge Tower and at the same time, allowing it exude a unique charm through the magic of light and shadow.”

Besides housing the double-stacked projectors in a custom-built “tower-like” enclosure to protect them from inclement weather, the Wincomn team optimized the projection design to overcome the issue of projection light loss due to the tower’s glass surface. The team’s hard work and meticulous attention to detail eventually paid off with bright, vivid and lifelike visuals that ensured a high-quality presentation. The show mesmerized thousands of visitors and earned Linjiang Bridge Tower a new title of “an unmissable nighttime attraction in eastern China.”

Michael Bosworth, Executive Director, Head of Enterprise for APAC, Christie, commented, “Linjiang Bridge Tower is a famous landmark in Wuhu city and I’m delighted that Christie Crimson WU25 laser projectors were selected to deliver an impressive light show on its façade. Packed full of advanced features such as Christie BoldColor Technology and TruLife™ Electronics, and featuring a long-lasting solid-state light source, the Crimson Series is the ideal solution for demanding, high-usage applications.”

Christie Crimson laser projectors are trusted by customers all around the world and have been deployed for numerous major projects and events, including the Beijing Film Academy Building light show in China, Statue of Unity light and sound show in India, 2019 Guadalajara Festival of Lights in Mexico, and Sydney Opera House light-up for Diwali and Remembrance Day in Australia.