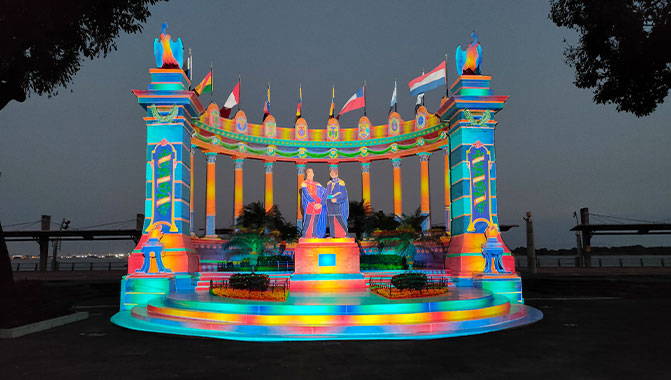 The show was part of the activities organized by the Guayaquil City Council, in conjunction with the Municipal Tourism Corporation, which also included a spectacle featuring 300 drones.

The Point, the city’s tallest building standing 137 meters high (nearly 450 feet) and featuring iconic spiral architecture, was one of the sites along the route. Covering an area 100 meters high by 30 meters wide (328 ft x 98 ft), the mapping highlighted the development of the city through animated graphics and other elements, representing different stages in the city’s growth, like the railway, its port, and the architecture.

The Palacio Municipal de Guayaquil (city hall) showcased projection mapping  80 meters wide by 30 meters high (262 ft x 98 ft), telling the story of the founding of the port, the invasion of pirates, the liberation process, and the city’s cultural and ethnic diversity.

Other mapping sites included Torre del Reloj, the clock tower -another symbol of the city, and the Guayaquil Metropolitan Cathedral. Each one of the projections was coupled with performances by popular musicians and broadcasted live on social media due to social distancing regulations and in-person attendance restrictions.

3Laser used photographic techniques to adjust the images to the irregular facades on which the projections were to be screened. “It was quick and easy, and allowed us to map all the details in the perspective of the projectors,” explained Ángel Cuesta, director of 3Laser. “First, we armed the structure of the projectors, and then we took photos and made a projection of the area to be covered so that we could calculate the pixels. With the help of laser measurement, we were able to calculate the real surface areas and the zoom for the lens from the position of the projector. We always try to place ourselves as far away as possible as to not block the public’s view with the scaffolding for the projectors.”

One mapping was held daily, which meant moving the fleet of eight Christie 3DLP, 20,000 lumens projectors from one building to the next. Six operators from 3Laser handled the transport and management of the equipment.

“In that regard, Christie projectors are 100% reliable. We take them on tour from one show to the next and they have never let us down. All you have to do is change the air filters and the lamps every now and again, and they can operate for hours and hours,” said Ángel Cuesta.

Cuesta added, “The configuration steps for the projectors are quick and easy, and the color performance is unique, remaining stable over time. As well, the size and weight are ideal for set up in otherwise awkward places and they can operate in portrait mode, which is an advantage.”

Ángel Cuesta only had good things to say about the projector’s hardware and firmware control: “It is ultra-reliable. And the same goes for the networked control tools and the Christie Twist software that helps us to make full use of the resolution and color, which is essential to achieve maximum realism in the 3D effects. As well, the lenses are compact and have integrated zoom and focus, as well as dust filters to prolong the life of the projector.”

The projection mappings for Guayaquil’s bicentennial had a real wow factor for the public, who had never seen the city’s most important buildings in such vivid color. It was such a resounding success that the city’s mayor, Cynthia Viteri, intends to repeat La Ruta del Mapping as a yearly event in the city as an attraction for locals and tourists alike.

Ángel Cuesta concluded, “There is no time for post-production in live events. They either work or they don’t. There is no halfway point. And, in this case, yet again, the performance of the Christie projectors was amazing and allowed us to exceed all expectations.” 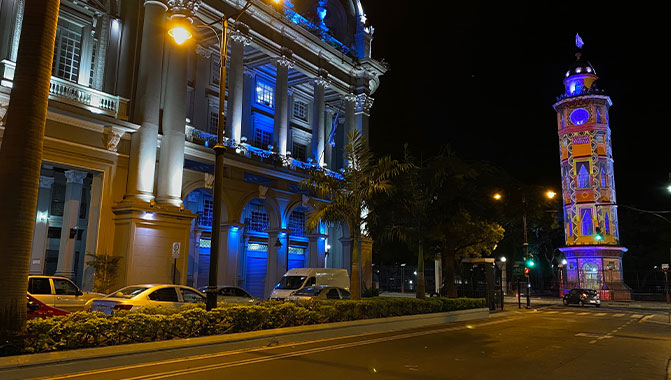