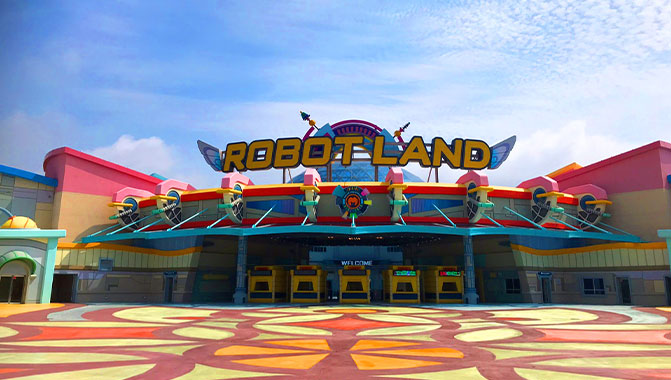 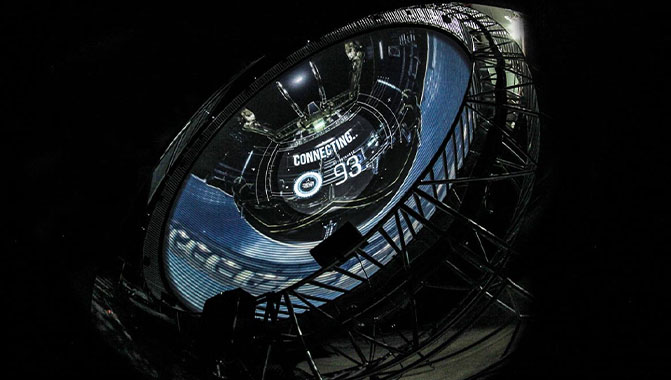 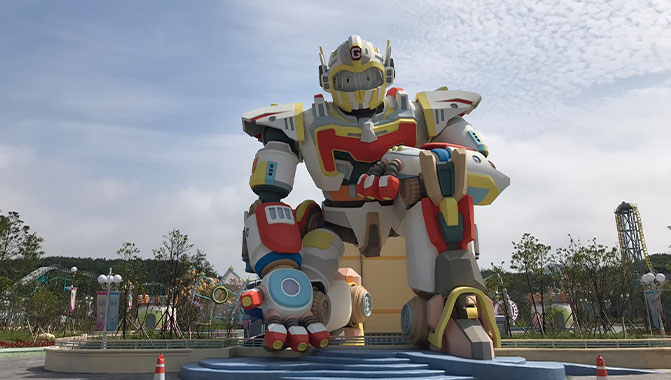 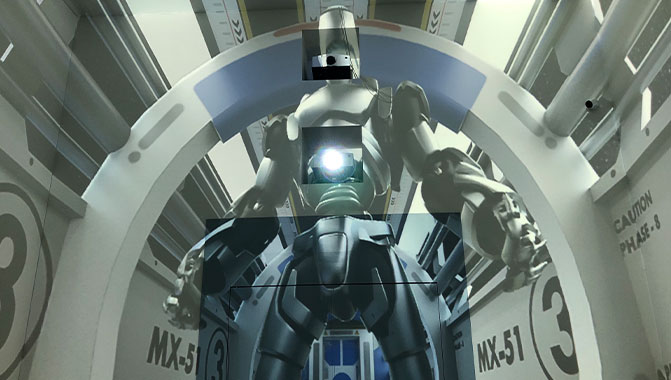 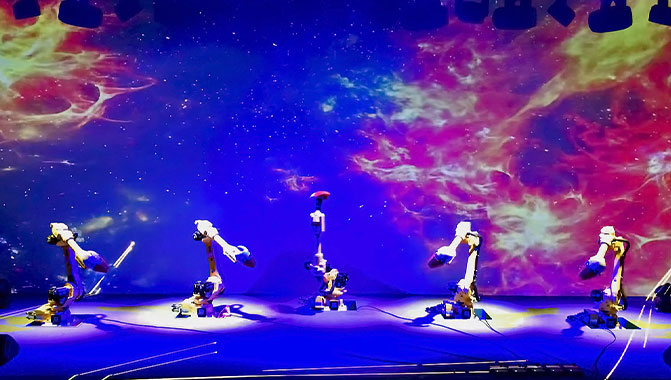 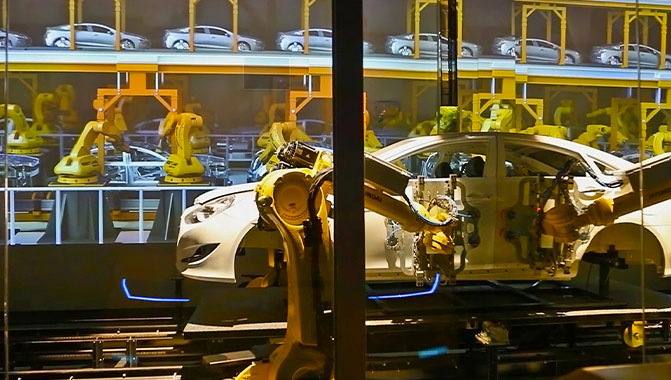 A 13-meter-high robot ambassador statue on a bended knee and open arms welcomes visitors as they enter the expansive Gyeongnam Masan Robot Land, a new super-sized entertainment destination located in the city of Changwon on the southeast coast of South Korea. Flanking the towering statue are numerous attractions adorned with colorful and futuristic-looking motifs, setting the tone for an exciting journey that celebrates intelligent robotics where high-tech machines deliver top entertainment for guests of all ages.

Occupying an area of 1.25 million square meters (which is roughly the size of 150 football fields), Gyeongnam Masan Robot Land is an ambitious project that took 10 years to complete. It comprises a theme park, R&D facility and convention center, and is touted as the world’s first robot-themed entertainment destination. Its main attraction is none other than the dynamic theme park that houses 22 rides, 11 experiential facilities, and about 250 robots that possess various abilities ranging from precision assembly to classical dance.

“As the first robot-themed attraction in the world, no effort has been spared to deliver the best visual and audio experience to local and international visitors of Gyeongnam Masan Robot Land,” says Seung Won Ham, Head Manager (System Team TE/ Leader), Star Networks. “Christie’s laser projectors and image processing solutions have been the clear choice from the onset. Besides using high-performance projectors and media servers, we want to accomplish a fully integrated technology solution that the end user can confidently rely on. This decision resulted in the best outcome in terms of usability, performance, reliability and ease of maintenance.”

A total of 48 DWU850-GS and eight D13WU-HS laser projectors have been fitted in all experiential zones, complemented by various Christie Pandoras Box systems for real-time video processing and show control. The DWU850-GS laser projectors are used extensively for projection mapping and immersive displays that transport visitors to futuristic worlds aided by high-tech robots. These include realistic projections of a car assembly line, a troupe of five industrial robots dancing to Tchaikovsky’s Swan Lake amid eye-catching projections in the background, and lifelike images of ferocious dinosaurs projected on a three-sided wall during an adventure-filled AGV ride.

The D13WU-HS laser projectors, on the other hand, are deployed for an exhilarating full dome flying theater, known as “Wing of Cosmos”. This highly-immersive ride features a 20-meter-high full dome screen and 4K-resolution content produced entirely by D.L.T Group. Even though this is the first time that the company’s engineers are working with the D13WU-HS, it only took them 30 minutes to calibrate the eight projectors with a special fully-automated calibration software. The amazingly rich and detailed visuals made possible by the D13WU-HS projectors, combined with surround audio and motion seats, makes this flying theater the most popular attraction in the theme park.

Ham notes that Christie Pandoras Box forms the backbone of the theme park’s attractions by linking up all audiovisual systems and controlling various aspects of the shows such as projection mapping, blending, multi-channel audio, and lighting. As well, the Christie Widget Designer serves as the main graphic user interface (GUI) for projectors, audio & video equipment and robotic systems for the respective themed attractions.

Elaborating on the benefits of Widget Designer, Ham says it enables the GUI to be customized, so that systems operation can be simple and intuitive for theme park staff. This means that staff do not require specialized training to operate the systems, and this translates into cost savings. He explains: “With Widget Designer, we can customize and simplify the operating buttons. This is an incredibly useful feature as functions such as system monitoring, diagnosis, and emergency stop can be customized for the GUI for easy operation.”

When the theme park officially opened its doors to the public in September 2019, both local and overseas visitors turned up in droves to check out the various rides and attractions. And they were certainly not disappointed. The projection, audio and lighting effects greatly enhanced the robots’ performances, and many of the attractions have won praise from visitors for their high entertainment value. This proves that a robot theme park can be as popular as conventional theme parks.

A highly reliable and qualified system

Ham and his team of engineers are thrilled by the overwhelming response from visitors. He attributes the smooth operations to the perfect integration of various systems, saying, “We made the right choice by going with an integrated system using the Christie Pandoras Box. If we had used a combination of individual solutions, it would save some costs initially, but result in higher TCO costs and lower overall quality over the longer term. I’m glad that the Christie solutions have contributed to a highly reliable and qualified system.”

Commenting on the performance of the Christie laser projectors and Pandoras Box systems, Ham adds, “The Pandoras Box, working in unison with the laser projectors, enabled accurate synchronization between the robots and contents to deliver a highly entertaining and engaging show experience. If the full score is 100, we want to give Christie a score of 200!”

“It’s a pity that the Christie Terra SDVoE solution wasn’t available during the design stage of Gyeongnam Masan Robot Land and we had to install matrix switchers instead,” he continues. “If we had used Terra, it would have been the perfect system. Nevertheless, we’re very satisfied with the end results, and are proud to have strengthened our partnership with Christie through participation in this major project.”

Steve Bang, Account Manager, Entertainment, Christie Korea, comments, “We are delighted that Gyeongnam Masan Robot Land has chosen our powerful and dependable 1DLP laser projectors and Pandoras Box for most of its themed attractions. The successful deployment and integration of these Christie products by our partners at the respective zones have aptly demonstrated the versatility and unlimited possibilities of delivering fascinating showpieces for all visitors.”