Christie selected as ‘Tier One’ supplier for 195 Piccadilly

It took seven years for BAFTA to complete the renovations of its historic Victorian building at 195 Piccadilly in London. They literally raised the roof. This was an epic feat of engineering which BAFTA’s head of property, Pauline Campbell, summed up vividly: “It took eight months to get the scaffolding in place and eight hours to lift the roof three metres.” They revealed beautiful old glass skylights above as the building was originally the galleries of The Royal Institute of Painters in Watercolours – and perhaps fitting that a new generation of artists in different media now have the space. The project was delivered on time and within budget despite the pandemic and added an additional floor, with Benedetti Architects completing the interior.

The technology is substantial with much of it integrated as part of the build - and spans the gamut of AV applications. There is a cinema screening room, corporate rooms, learning suites, foyers and venue space. When walking through the building you will find both laser projectors and DCI compliant cinema projectors, flat screens, LED tiles, LCD panels and the content management and advanced blending software to make the image look seamless. 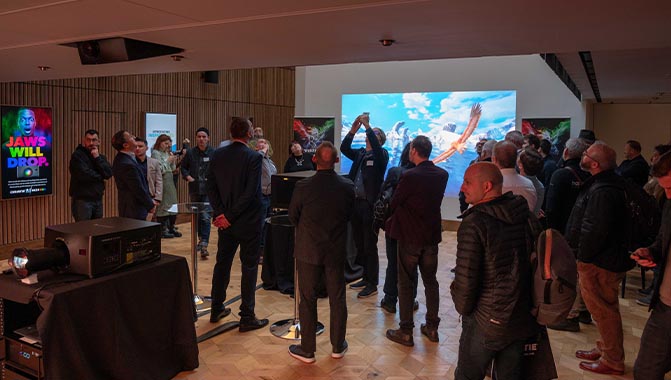 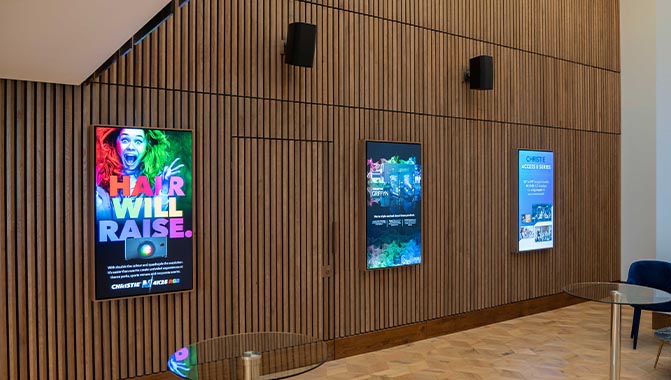 While BAFTA is famous for its film and television awards, “What makes BAFTA unique is that we are the only charity that covers all of the moving image,” explained Campbell. Much of BAFTA’s work is in supporting young creatives. It was also important to be sustainable and, “leave a legacy, the building is future-proofed for the next fifty years.” The reach within the building will be 80,000 people a year.

Having additional capacity, new technology and increasing revenues, according to the chair of BAFTA Krishnendu Majumdar, “will enable us to grow our charitable work and support new and existing talent. It will also give us our first ever dedicated learning space. This is why our work to expand and renovate 195 Piccadilly is so important.”

The technology supports that vision. Christie was their ‘Tier One’ choice according to Campbell, who traced the story behind the build. “The technical installation was managed by White Light. I worked with them all through my theatre industry life so knew we would get the best possible install and they worked amazingly with Christie. Everything within this rebuild has been about partnerships and relationships,” she says.

“I love Christie. When we went out to look for our partners - myself and Natalie Moss, brand partnerships manager- we had a wish list of organizations we never dreamt we would get because we thought they'd all say ‘Why would we want to do that?’ Actually, we ended up with all of them. And Christie were one of the first to come on board and they’ve been a dream every single day.”

Christie could supply the complete range of products required, at the highest level of quality as well as the service back up.

Film – and gaming – industry members now have an intimate, 41-seat screening room, sleekly finished in dark red leather, to watch their work or productions. The Christie CP2309-RGB pure laser projector lights up screens up to 44 feet with bright images. Cinema Next were instrumental in the design and installation process.

With the addition of new meeting rooms and the new Creative Learning Suite, BAFTA can bring their charitable outreach work in-house for the first time. Bright and airy gallery rooms – with a magnificent original roof light – are equipped with Christie LCD displays and laser projection. The ‘most revered space’, the David Lean Boardroom, as well as meeting rooms also have LCD displays.

There is a unique venue carved into the space – and a vital source of revenue for the charity. Pull down the blinds on the huge windows looking out to Piccadilly and the Ray Dolby room is transformed into a stunning 360-degree night-time panorama of London, using 12 Christie D20WU-HS laser projectors, Christie Mystique™ software, and Pandoras Box® for content management. The room will be used for everything from corporate events to weddings, and clients can display their own content

Sustainability is core. Impressively, BAFTA received an EPC rating close to a new build. All the wood in the building is FSC approved, seats in the main auditorium were reused and recovered in wild flax, and materials were recycled.

The technology plays its part, too. Laser projection reduces lamp use and is greener. “But the one real unique piece of the building is that we have full 360˚-degree technology designed into the building for projection mapping” says Campbell. That means we can do events without having to bring in big sets. Working with Christie meant we could make a really great sustainable space.” A nice idea at Christmas was to use the MicroTiles LED to display images such as a Christmas tree rather than having a real tree.

Accessibility in every form was a key word right from the front door to the back, according to Campbell. “Previously, people would have walked past a thousand times but now with the glass front and a receptionist, if a 14-year old wanting a career in the arts passes by, they can walk into BAFTA, ask questions and feel welcome.” There are now two new lifts which make access easier for wheelchair users, and the theatre spaces have removeable front seats.

Campbell calls the vast team involved ‘a village’ of several hundred consultants. Trades and crafts people closely working with each other and Christie’s support. “Scott Partridge was our main installer along with Pal Roppa,” she explained. “They're so collaborative. They made everything a joy and it's testament to them how fabulous the building looks. You know, there's £3m worth of tech in the building, a big chunk of that is Christie and it looks phenomenal. And that's down to their vision of what kit they wanted to put in and, yes, I love them.”

Make the most out of your space with the Christie® Captiva DWU500S 1DLP®  ultra short throw laser projector.