As the way we work has changed with the pandemic, the way we communicate over video has also evolved. The growth of virtual studios has helped in-person events move online, with the same branding, polish, and professionalism. Technology is driving this evolution, with solutions including Christie® Spyder X80 and Christie® Pandoras Box™ enabling content and delivery behind the scenes.

At Christie’s Cologne, Germany office, Mike Steinbrecher, director of business development, CMP, Christie, created a virtual studio for use by the Christie team. Last summer, as working from home continued and the Pandoras Box team began offering online training as well as webinars, Steinbrecher realized a need for a more polished solution than Zoom or Teams. But a traditional studio was out of the question.

“We didn’t want to do an LED CAVE studio. They’re very technical – first just to build it and get it working, and then you’re in a very technical room without any content, and that’s not cheap,” says Steinbrecher. “And in a lock-down, that’s not what you need. You want a better presentation than a home office screen. So my intention was to build a simple studio to do presentations, better than Zoom or Teams.”

“We built a studio, using our products, that shows how easily we can create better events, meetings and demonstrations,” says Steinbrecher. Using part of the demo and training room in the Cologne office, the original set-up consisted of a camera and a 50-euro green screen. A second camera was later added to do green key, as well as supplemental lighting. The space requirement was a modest nine square meters (96 square feet).

To ensure the studio is quick and easy to use, Steinbrecher opted for Christie Pandoras Box Widget Designer: “We used Widget Designer on an iPad to start up the whole studio, where you can also change between camera views and change the lighting.” This also allows the studio to be controlled by the person on stage.

He adds, “If you have a simple background, like a company logo, the studio is ready to go after turning on the camera, since there’s no specialized content, unlike a LED CAVE.” Streaming content, like a PowerPoint presentation, is also very easy. Presenters can stream with the presentation in full screen or picture-in-picture. “The layering in Pandoras Box allows for this kind of flexibility,” says Steinbrecher.

The new studio was most recently used for a virtual Christie CONNECT Pandoras Box conference, which featured product presentations, demos and Q&As. Says Steinbrecher, “We added a Spyder X80 for CONNECT, as we had four cameras and two computer feeds. We routed it into a YouTube feed, a recording feed, several monitors in the studio, and into Zoom. Because we had a lot of inputs and outputs, Spyder X80 made sense.” The team also used Christie Terra to route the signal between the studio and a separate control desk, to allow for social distancing.

The team also took advantage of the new features in Pandoras Box Version 8, including the NDI input for direct camera feeds, and green key feature to directly key someone in front of a green screen and add a virtual backdrop.

The team in Cologne will continue to use the studio for virtual events and team meetings. But, says Steinbrecher, the focus is on keeping the studio simple and easy to use. “A lot of people aren’t used to communicating through video, so the easier it is, the easier it is to adapt.” 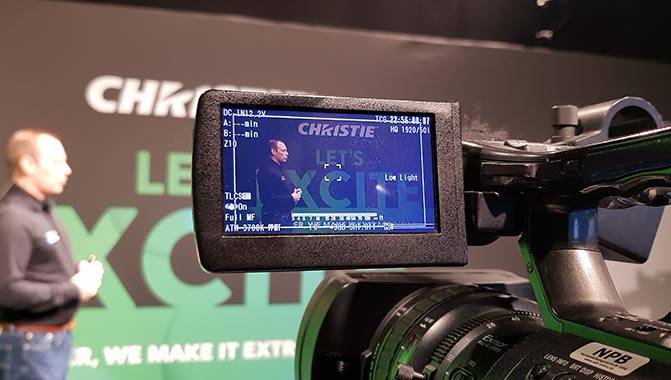 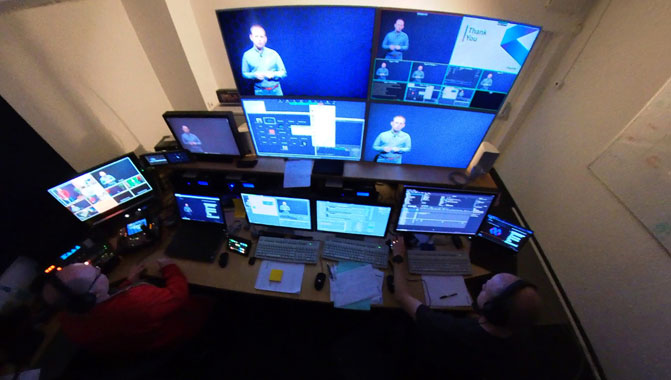