VR, AR and robotics in a unique concept 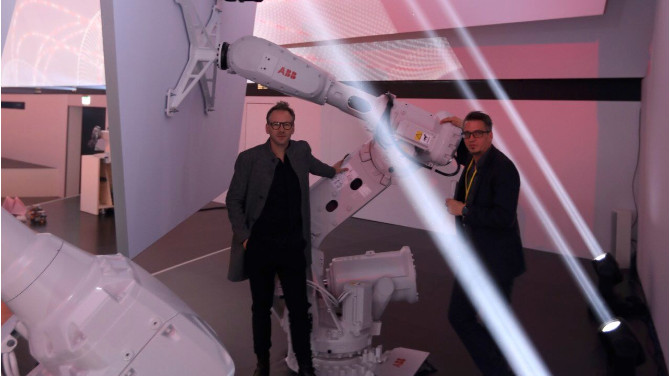 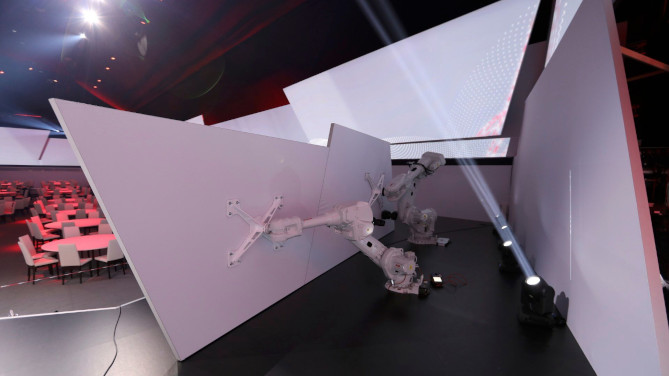 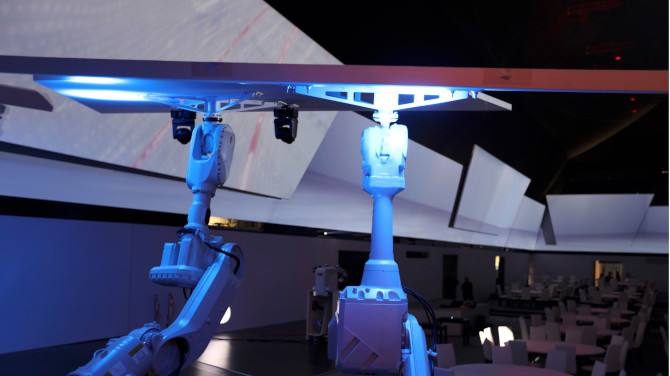 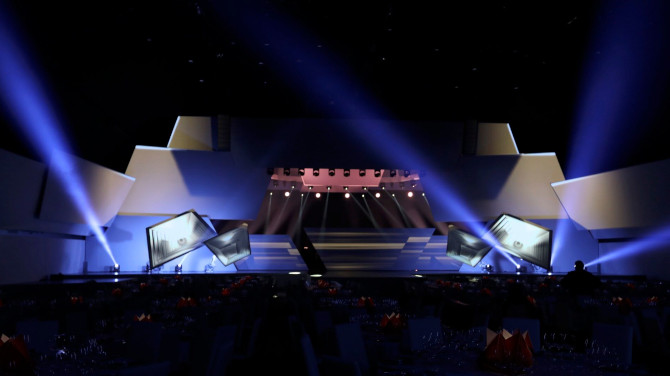 VR, AR and robotics in a one-of-a-kind show concept

Can an industrial robot be an event highlight? The special gala event held by the ABB Group in Wettingen, Switzerland, proved that this is no anomaly. To mark its 125th anniversary, the international technology group invited around 550 guests to attend a two-day event. The star of the show developed by event agency standing ovation GmbH under the motto "A look back to the future" was YuMi, the first collaborating two-armed robot in the world for small parts assembly developed by ABB.

The robots were fully integrated into the complex choreography with 3D projections in real time and acted as stage portals and flexible media surfaces onto which two Christie® Mirage 304Ks could project. The robot arms were controlled using realtime tracking. The organizers used a set-up comprising a Christie Pandoras Box media server and Christie Widget Designer Framework for the tracking. The two Christie Mirage 304K projectors were supplied by smARTech, Christie's sales partner in Switzerland and specialist for major event technology.

Michael Dancsecs, Managing Director of standing ovation, explained what he hoped to achieve with the show concept: "The aim was to incorporate ABB's achievements. As robotics is an important area of business for ABB, it was a perfect fit." Support in realising the stage show was provided by Loop Light, who are known for their creative deployment of lights and projection for events and shows and have already successfully implemented many projects with Pandoras Box and projectors from Christie.

With a total of 1,400 tons of material used, 110 km of cabling and an implementation phase of just one month, the major event was a real feat of organisation. The project demanded a lot from everyone involved in terms of technology, too. Dancsecs: "Technically speaking, the project was a major challenge, as the robots were designed for industry and not for shows." This required precise coordination of the communication protocols between the systems involved.

In order to achieve a zero-latency carriage of the projectors on the elements carried by the robots, Loop Light Managing Director Matt Finke and his Michael Hantelmann even employed specially programmed software in some places. "The flexible architecture that enabled us to tailor the Pandoras Box and Widget Designer systems precisely for this use was key for us," confirms Finke. Yet there were also many opportunities for adaptation on-site, such as in terms of attenuations and frame rates: "At the event, for instance, all systems ran at 120 Hz."

The projectors were set up at the opposite end of the marquee to ensure the best possible depth of field. The content itself was a mixture of real image and animation. Plus, the animation had a 3D effect that was generated from the centre of the room. "This made it appear to the audience that the panels carried by the robots were not flat but possessed depth," says Finke.

A mix of kinetics and robotics

YuMi the robot, short for You and Me, was the star of the elaborately produced choreography from start to finish. Just as it did at its first appearance at the Hanover Trade Fair in 2016, where it amazed US President Barack Obama and German Chancellor Angela Merkel, the development from the Swiss company succeeded in demonstrating its versatility for events. "We successfully realised the basic idea of leading ABB's great history into the future," states Dancsecs happily.

And it won't be the last time that robotic solutions are used as part of a show concept, Matt Finke is sure of that: "Robotics in general seems to be inserting itself into the everyday world more than could have been predicted just a short while ago. Until recently, these solutions were more likely to be found in an industrial environment." A good mix of reality, or kinetics, and robotics and virtuality with augmented or virtual reality applications seems to be good for new worlds in the event sector. "We see a lot of potential here."