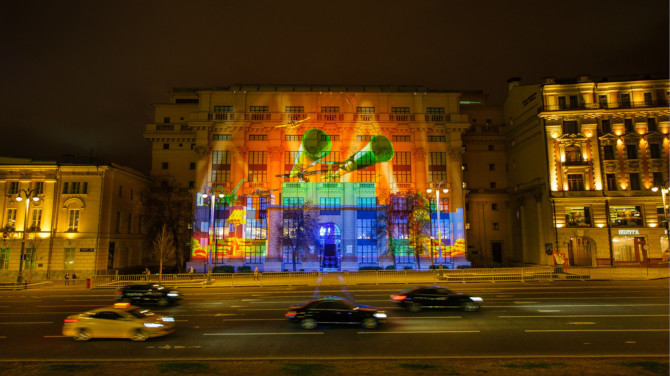 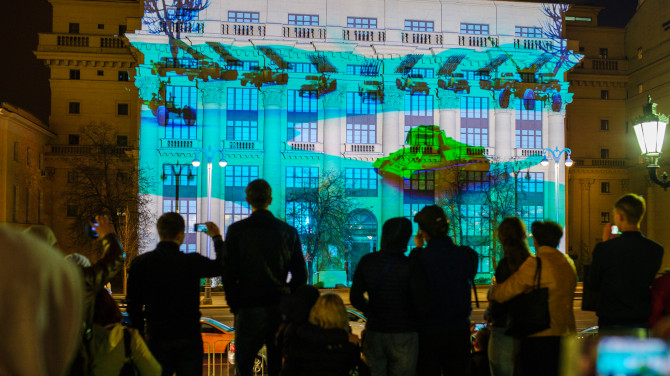 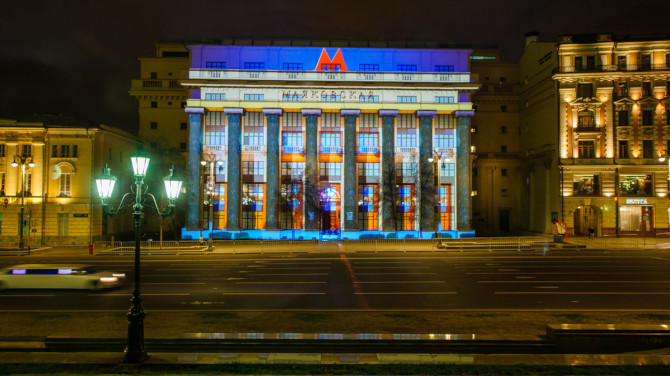 A video projection programme devoted to the events of the Second World War took place in Moscow from May 7 to 9, 2017. The show, 'About Victory', was put together with the support of Sistema, who were the major sponsors of the project, and who volunteered the façade of their building on Mokhovaya Street to be transformed into a unique canvas, onto which were projected scenes of the German army's invasion of the Soviet Union, of general mobilisation, of air battles and the exploits of Soviet pilots, of the partisan movement, and of Soviet forces' final expulsion of the enemy and declaration of victory.

The events depicted in this video projection are of vital importance in Russian history, so developing the content for the show was something that the organisers took very seriously. One of the initiators of the project was the Russian State Historical Museum, which assisted in the creation of the film with archive material, essays, and journals of those who fought.

ETC specialists preparing the content applied their many years' experience of creating vivid and unforgettable mapping shows in Russia to produce and assemble a nine-minute video sequence. "The programme was shown for three evenings, running from 21:00 to 23:00 each evening", Ruslan Semenov, General Director of ETC Russia, explains. "The single file of video projection content that we assembled combined both historical sources and specially created animated elements to make the celebratory screenings, which were shown on a façade with an area of almost 1,000 square metres, a powerful and memorable experience for all viewers."

"From a technical point of view, mapping on an area of this size wasn't a major challenge", Ilya Susorov of ETC Russia explains. "The projectors were set up in an array with three in each stack (and here it's important to point out how easy the Christie Roadster series is to stack). We projected from four points, and thanks to the high light output of the Roadster S+22K-J we were able to achieve a total brightness that allowed us to use the projectors in layers, despite the large area we had to cover and 'parasitic' illumination. We were also able to avoid stitching effects on the trees. For projecting from a distance of about 65 metres we used 2-2.8:1 lenses."

For Ruslan Semenov, Christie projectors played a special role in the project's success: "We chose Christie just as we have done for all of our past projection mapping projects. Christie is known for its brightness; the projectors have been tried and tested and have proven their reliability. Ever since we started creating these remarkable shows and projecting them onto prominent landmarks, some of which are no more than half a kilometre from where we are now, we've always stuck with Christie Digital equipment. The Moscow Manege, the Moskva Hotel, the Bolshoi Theatre, Saint Basil's Cathedral – it's like a chronicle of projection mapping."

ETC Russia specialists who worked at the venue every day confirm that, thanks to many years of experience working in varied conditions, and to the team's high degree of familiarity with the equipment, no problems arose during installation. Even ever-tight deadlines were no issue: the full installation and adjustment process took less than 24 hours.

Despite the cold weather and even an unexpected flurry of springtime snow, thousands of people came to watch the 'About Victory' show, sharing their photos and videos on social media with the hashtag #oPobede (#AboutVictory). In the words of the project's organisers, the show became a kind of bridge between generations, bringing together veterans and today's young people. Documents uncovered in the course of this historical and cultural project will be displayed in a virtual exhibition which has also been created by the Russian State Historical Museum and Sistema.