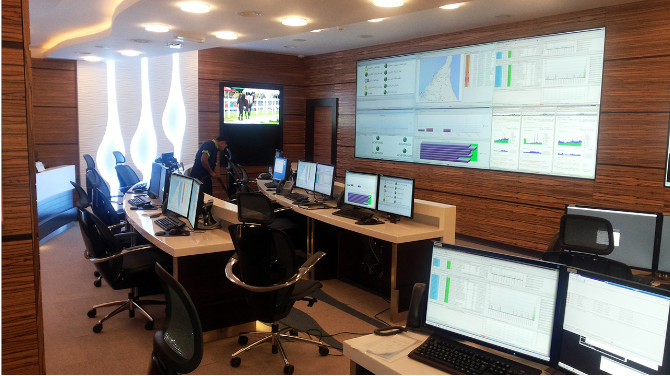 With offices in Dubai and Abu Dhabi, turnkey solution provider, Atlas Telecom, has used its experience to build a wide customer base — particularly when it comes to equipping NOCs for use in demanding environments. In fact the company operates its own dedicated NOC Support Office and has become a specialist in undertaking such work for Government and Military agencies, as well as providing monitoring solutions for public services like the police.

Yet while they have supplied AV solutions to the Abu Dhabi Police Force on various communication projects over the years, it was only when they successfully tendered for the for the new IT control and operations building that they delivered their first video wall. And their response was to design a creative hybrid solution based on Christie LCD flat panels and LED rear projection cubes.

Atlas Telecom's AV consultant, Daya Shankar Singh, believes his company was awarded the contract based on providing a better overall concept and solution using Christie's advanced mixed media solutions. He explains, "The reason we chose Christie is because the control room has two distinct areas, isolated by electrostatic glass, which can be on or off as required."

The walls have been constructed largely on a combination of Christie FHD551-X LCD displays and Christie 70" HD 1DLP rear projection LED cubes in 16:9 aspect ratio. These are run in conjunction with a dedicated Christie TVC-1700 controller, providing 20 HD outputs and 28 DVI input feeds.

The primary area functions as the Operation Centre, and contains two video walls with 70" HD 1DLP cubes, with RPMHD-LED02 (HD) rear projection engine in a 3 x 2 configuration. Each display is offset around one metre from the centre.

The second area is the NOC and this houses the Christie FHD551-X 55in LCD screens in 2 x 2 configuration.

All displays — including separate news channel video, which is displayed on a pair of LG 55" screens — is under the command of the TVC-1700 video wall processor, which places the content as required. The controller itself is installed in the client Data Centre, situated approximately 45 metres from the Control Room.

The installation, Mr. Singh confirmed, met the client's criteria for narrow panels, ultra narrow bezels, an LED backlit screen — and in the case of the FHD551-X, front servicing. "These were all attributes that the clients were expecting from a high definition display," he confirmed. "It enables them to visualize many events on a single screen. The Christie products are known to be reliable and to date it has operated flawlessly."

Operationally, it couldn't be simpler. The DVI-D feeds are sent from the operators' console in the control room, and the wall addressed by the individual users, depending upon the requirement.

According to Mr. Singh, "Atlas provided a team of trained technical engineers, who carried out a professional installation, with a high degree of quality control during the job, and full service support following the installation." Their other key representatives included Samer Jammoul, head of Atlas Telecom's Project Management Office, who led the bid (and oversaw commissioning and sign-off on completion); and Atlas project Manager, Ahmed Ibrahim, who was responsible for the successful delivery.

"We received assistance from the Christie engineers who also provided the client training — so that not only did they have the confidence that they would receive the best tuned and calibrated system that they could purchase, but also the maintenance and service support that we would provide.

In addition to supplying the Christie equipment Atlas Telecom provided Cisco routers, Extron DVI-D transmitter and receivers on a single UTP — and a Crestron control system to select the various scenarios. They were also responsible for all the interior work, including structured cabling.

A spokesman for Abu Dhabi Police concluded, "The project has exceeded our expectation and we will be recommending Atlas for a similar project at a future stage. The project team has the necessary expertise to deliver world-class projects using state-of-the-art display equipment such as these Christie walls."

The ideal video wall processor for real-time and high-resolution displays, designed for 24/7 use.