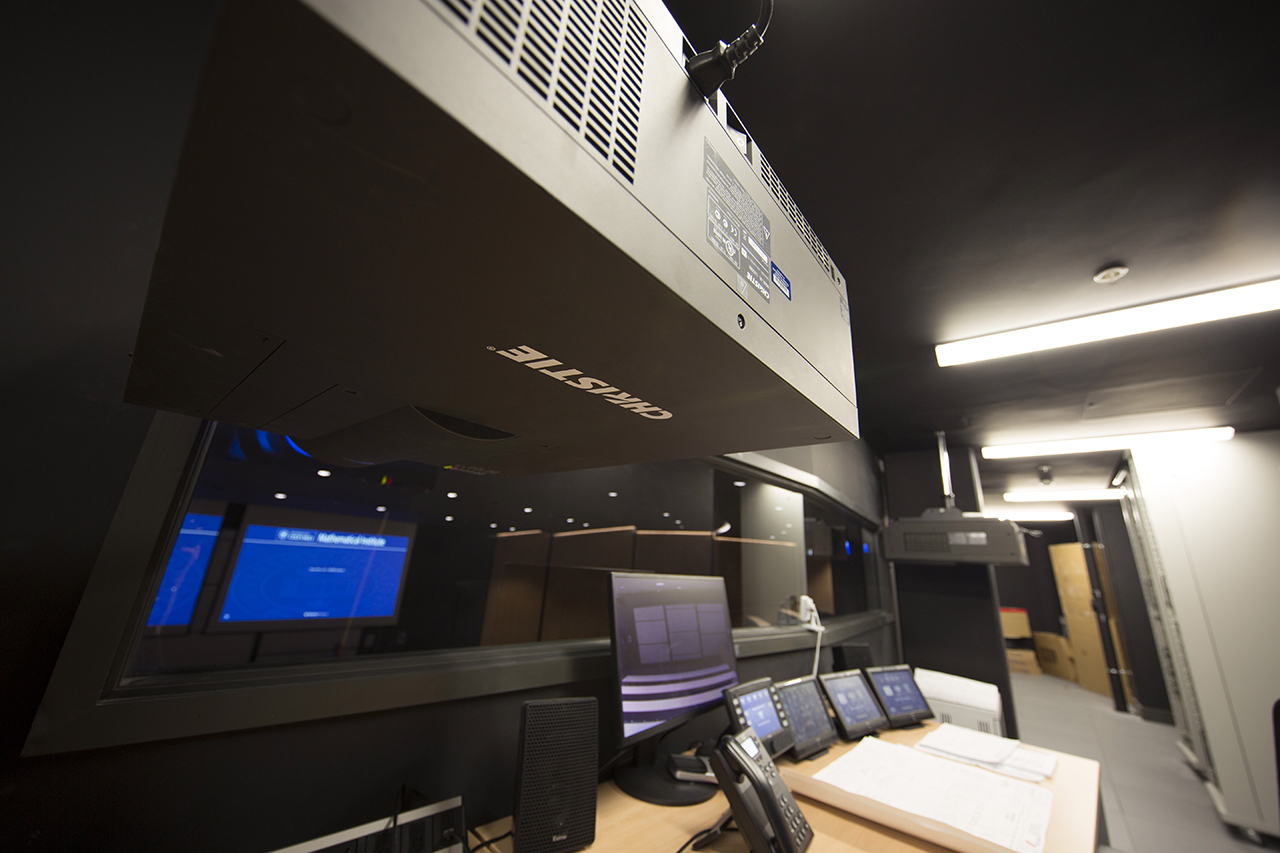 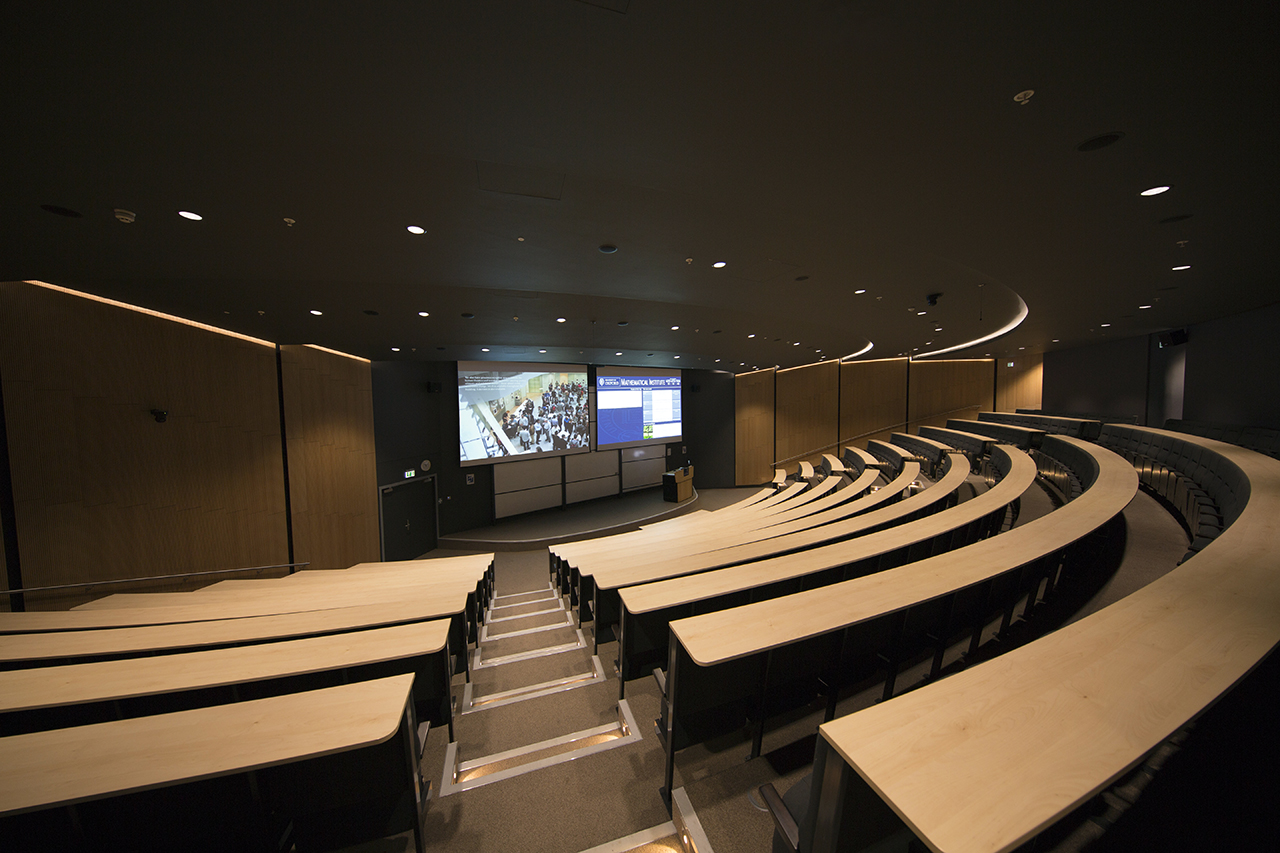 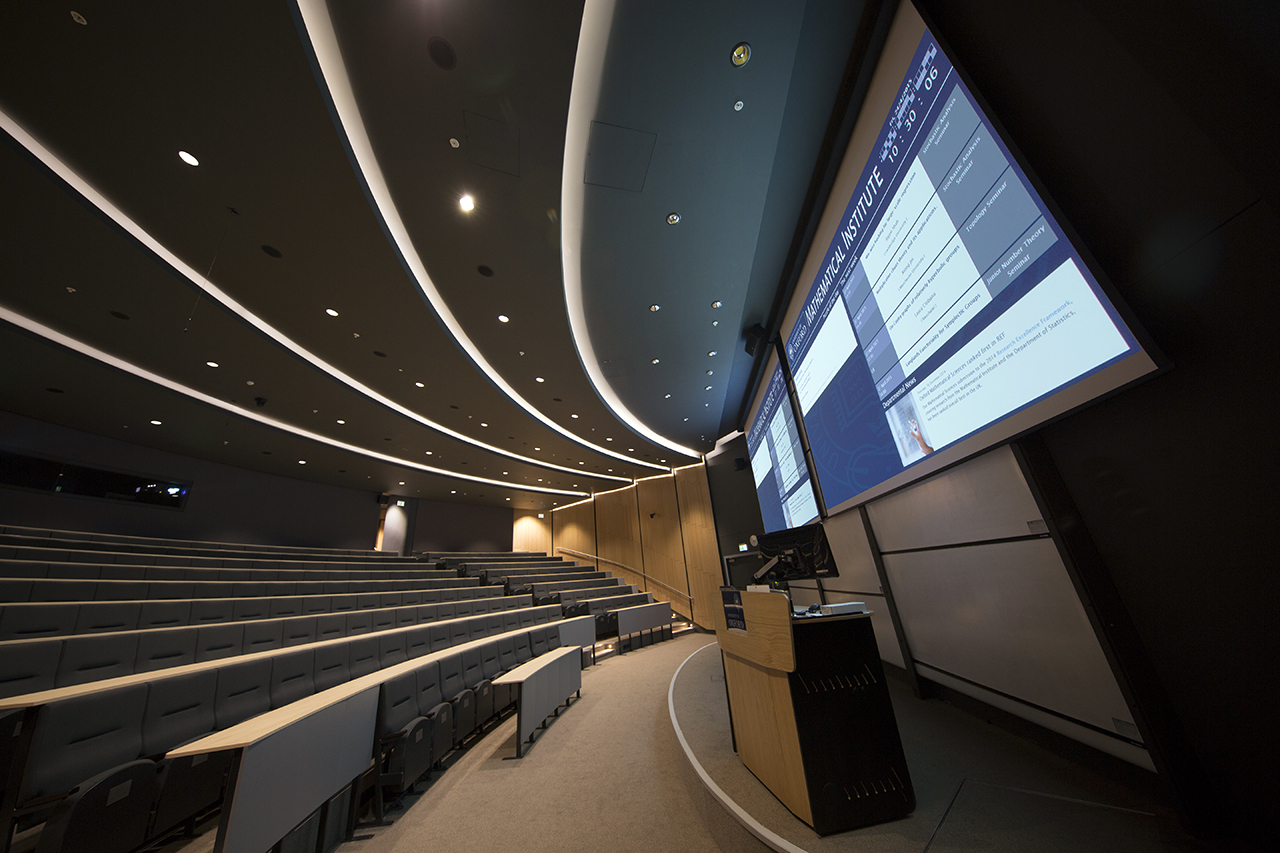 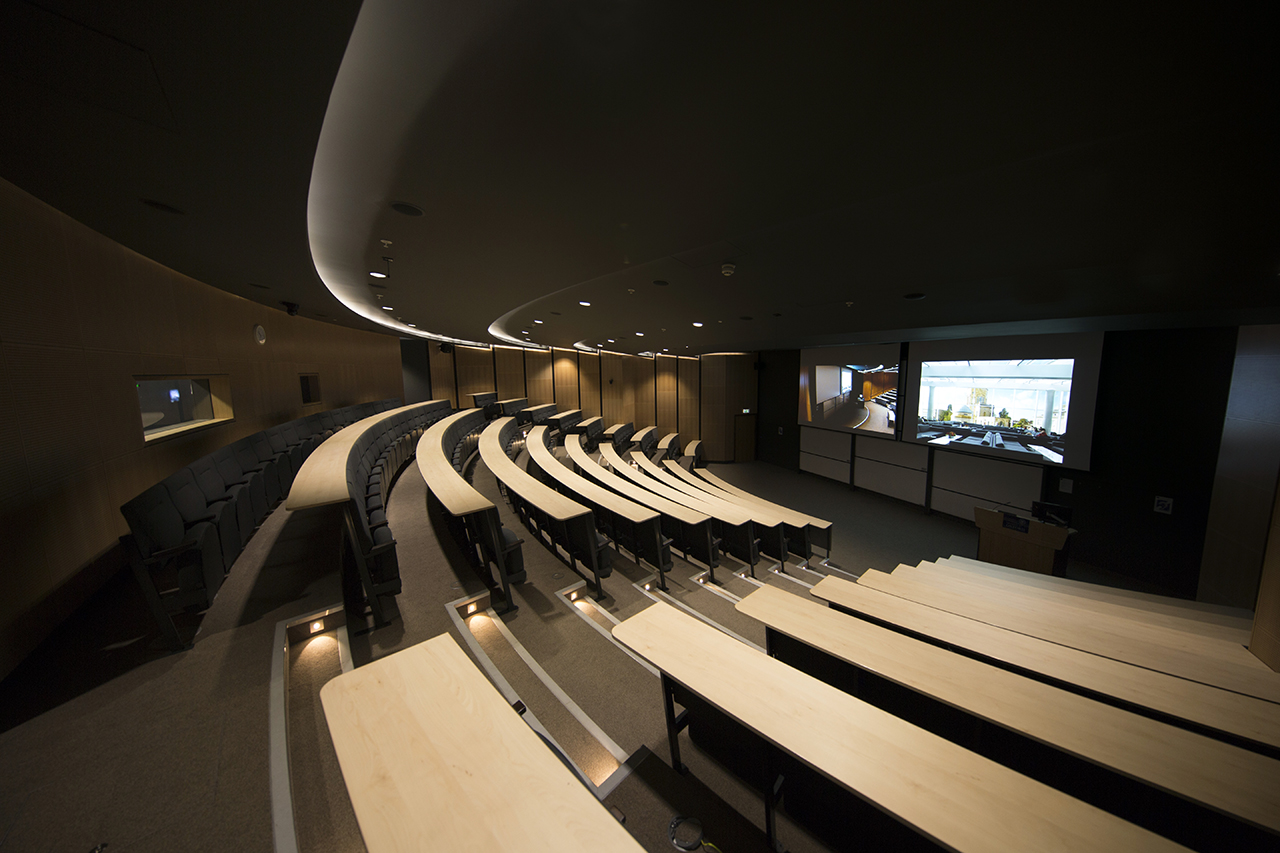 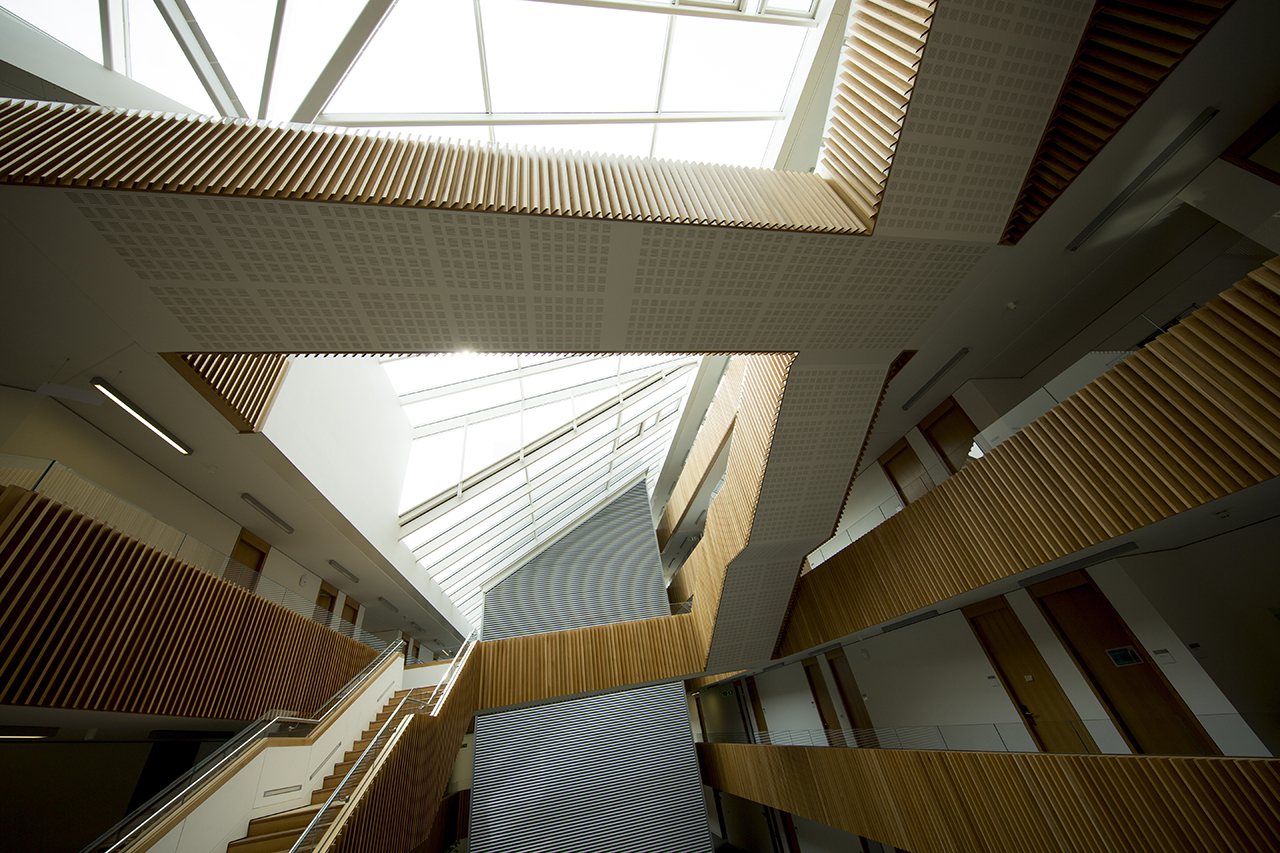 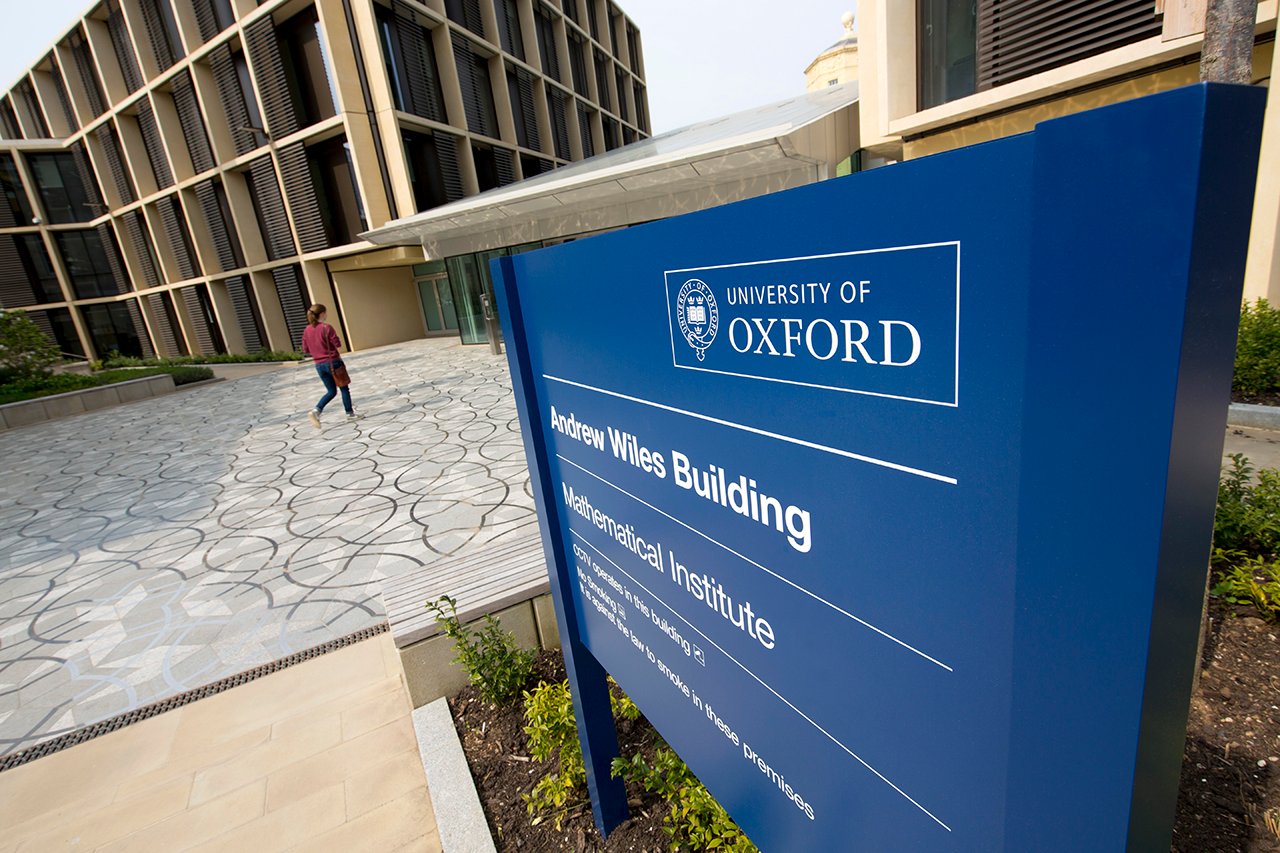 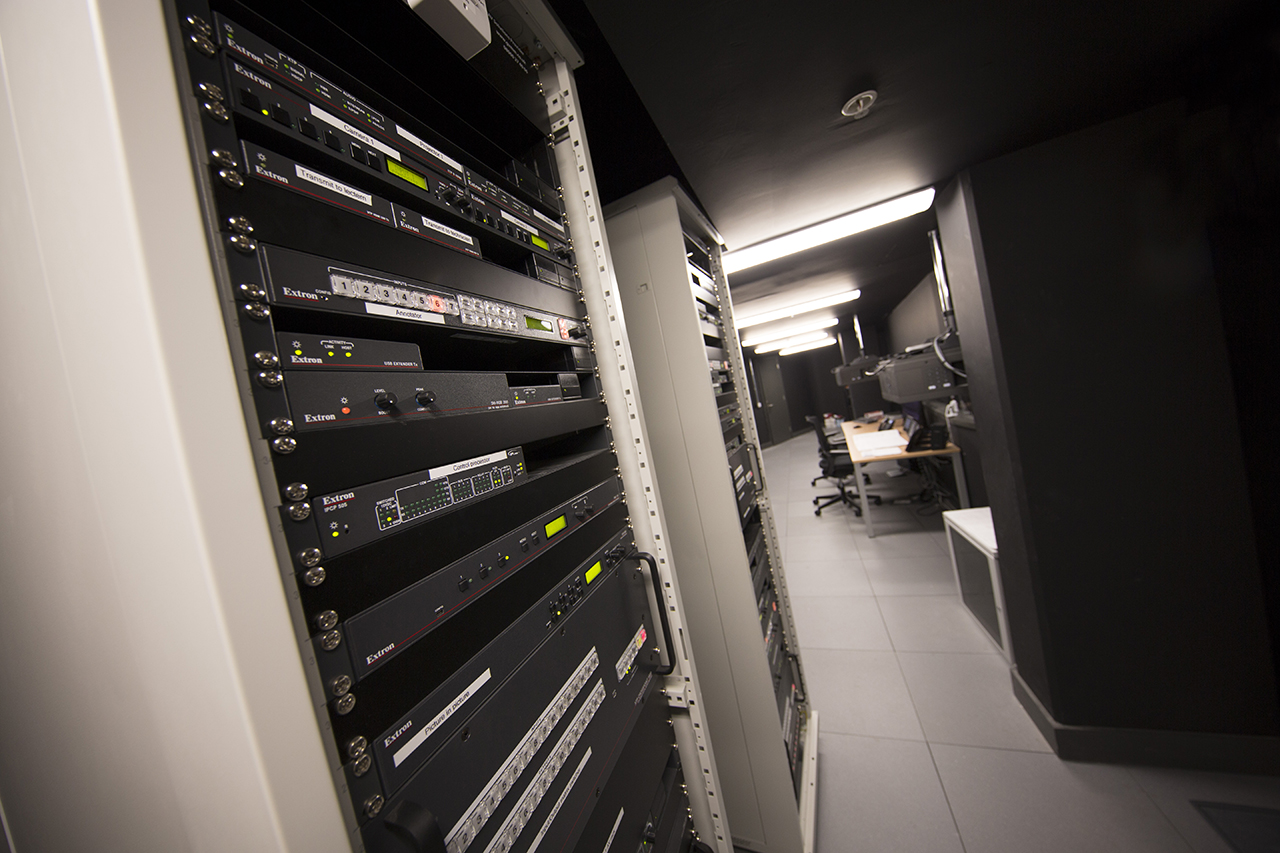 The vast new Mathematical Institute at Oxford University is known as the Andrew Wiles Building after the Oxford professor famous for being the first person to prove Fermat’s Last Theorem (a promise he made as a ten-year-old-boy). Charmingly, the website, “Welcomes our collaborators, our friends and the researchers of the future to share the beauty and power of mathematics.” Certainly the building is stunning. It’s also beautifully functional. The design sets out to be sympathetic to the Oxford skyline (with fantastic views from the upper floors) and reflect further mathematical influences throughout its architecture.

The construction cost for the maths space itself, including the building fit-out and AV, ran at around £45m. Its many teaching rooms are equipped with a wide selection of Christie’s latest generation 3LCD WUXGA and HD projectors, with its superior color image generation. Some rooms are linked so lectures can be shared remotely and are interactive in both directions.

The design and installation was carried out by GV Multimedia, who specialise in the educational sector, and all 21 Christie projectors — including LWU421, L2K1000 and LHD700devices — were supplied by Audio Visual Material (AVM), Christie’s exclusive UK distributor for business projection, display and processing products. The dedicated building will serve all 900 undergraduates, while boasting workspace for over 500 researchers and support staff, and the three lecture theatres will also benefit the university as a whole.

According to Dr. Keith Gillow, the Institute’s Director of IT and Physical Resources, the audio visual component spans 13 teaching spaces and six meeting rooms — including three fully equipped and linked lecture theatres with raked seating.

Having won the design stage tender for the AV, GV Multimedia duly competed for - and duly awarded - the installation tender. An outline brief was developed between the department and design team and refined following site visits to other installations, with the integrators further modifying this following conversations with key suppliers.

The perfect projector for every space

According to GV Multimedia sales director, Kristian Cutting, “We were already familiar with Christie’s LWU421, having used them on many previous projects. We liked the images they were producing and given the brief from the client they were also the best fit in this application. It’s a small-scale projector and perfect for the spaces provided. The white projectors also worked well with the room aesthetics.”

The site comprises five dual projection rooms (incorporating three lecture theatres and two 60 seat lecture rooms), a single quad projection (in the 30 seat Access Grid room), as well as seven single projection spaces (a 38-seat room and six 24 seat rooms). Detailed to these are 15 of the LWU421’s along with four of the L2K1000 and two LHD700.

Of the lecture theatres, the two larger 363 and 216 capacity rooms have been equipped with the Christie L2K1000 projectors, firing onto two 4.5-metre screens, while twin LHD700s are used in the smallest (114-seat room) projecting onto two 3.5-metre screens. The three areas are linked using an Extron XTP matrix switcher, which allows either of the larger two to act as a master and transmit to the other two rooms, while the entire installation is under Extron touch screen control.

Equally well defined is the Access Grid room where the video conferencing system is used to share graduate level lectures between various universities’ maths departments. This contains four Christie projectors — three forward facing and one rear — facing that duplicates the content of one of the front three projectors), as well as four cameras, smart boards and numerous mics. As Dr. Gillow explains, “This allows a lecture to be given in one place but for the occupants of each room to interact, seeing the remote audiences on the duplicated pair of screens and the lecture content and lecturer in general on the other two. It is a fully two way experience.”

“Each university room can hold 15-30 students and this allows advanced graduate course lectures to have a critical mass of attendees and expert lecturer that would not always be possible or efficient if done purely locally at each university.”

In addition GV Multimedia also provided a complete audio/PA infrastructure with radio mics, while all the theatres have an induction loop system and a fixed mic on the lectern.

In summary, Dr. Gillow confirms, “The Christie projectors have been in use for many months and have been performing extremely well, with most following the same native HD resolution of 1920 x 1080.”