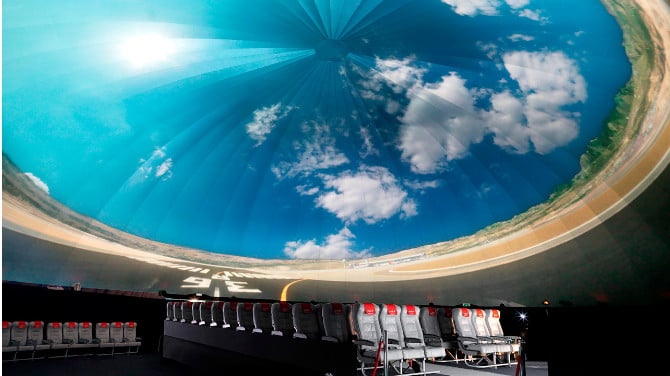 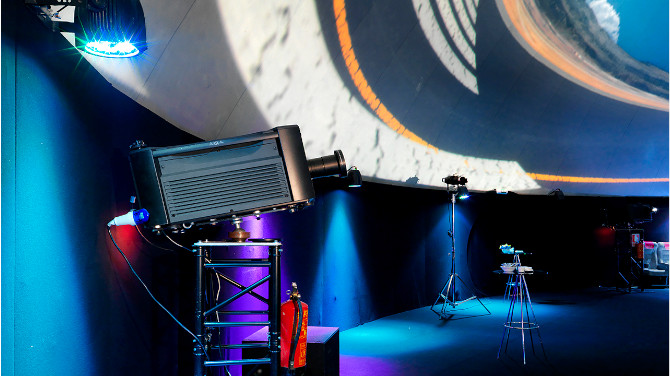 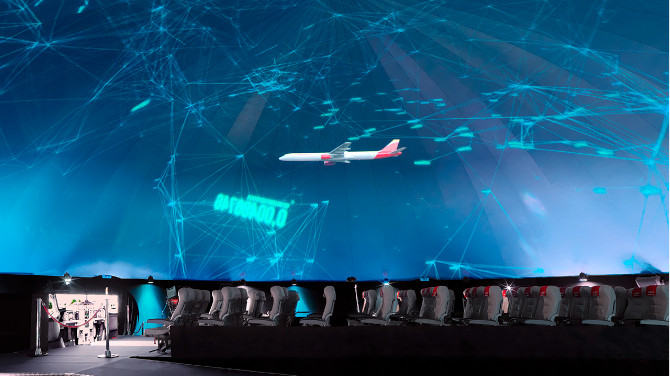 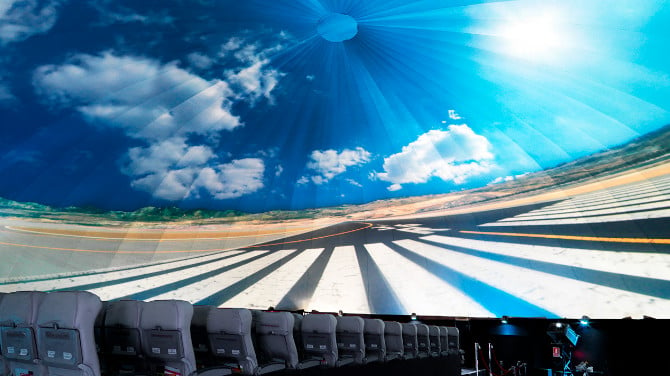 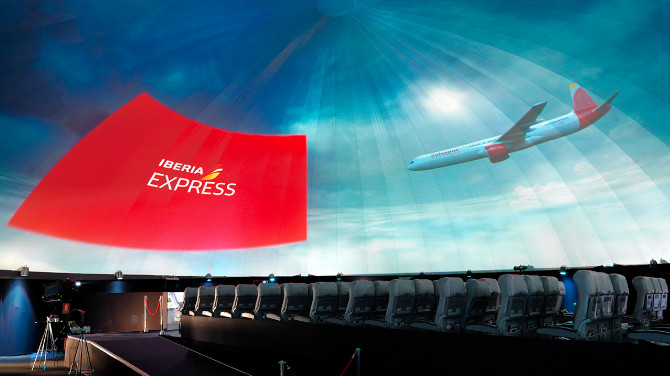 3 years, 10 million passengers. In today's cut-throat travel market it would be an achievement to keep a customer base of 10 million passengers, but to grow one is a monumental achievement. One Iberia Express has been recognized for by the industry with multiple awards, the latest being the coveted "World's most punctual low cost airline." So cause for celebration?

Definitely, but rather than taking the celebration to the skies and risking their well-earned reputation (and award) for on-time flights; Iberia Express welcomed passengers to a virtual Iberia Express flight from Madrid to holiday destination Tenerife with the help of 360◦ dome projection courtesy of live event specialist Newmedia Creative Technology Studio and Pro-AV manufacturer Christie.

Transformed into a convincing Iberia Express airplane, Newmedia's dome in Madrid was used non-stop over three days in countless sessions which were free to the general public. The event gave people an overview of the history of air flight and the company's achievements over these first three years, and then took hundreds of passengers on board a virtual flight to Tenerife.

Paloma Utrera, Head of Sales for Iberia Express, explained, "we were looking for an event that would help us to convey these landmarks in a technologically innovative fashion, because it is one of the defining elements of our DNA and one we are constantly working on, always looking for products that will give us an edge."

The biggest challenge was to ensure the level of realism so that people would be able to experience the sensation of really being inside a plane and flying. Diego De Anna, CEO at Newmedia, said: "When we came up with the idea and explained it to Iberia Express, we were convinced that we could create this sensation. And to be absolutely certain we did a virtual simulation using an Oculus Rift virtual reality system. We fixed it to a specific point and, in this way, we were able to simulate what would later be the platform or airplane fuselage. We then created a 360° film in real time, and modifying or changing the equator of the film to test the sensation of taking off and landing, which was definitely going to be the litmus test for this virtual flight. Once we saw that this was possible, and that the feeling was totally believable, we got down to work to take it to the scale of an Airbus A320."

Newmedia used a geodesic dome with an internal "negative pressure" projection system. The dome had a diameter of 21.7 metres and measured 11 metres high, with a surface area of around 364 square metres. Inside this structure it recreated part of the fuselage of an Airbus A320, the company's signature airplane. And then, 90 real seats on loan from Iberia Express were secured on a platform with a subwoofer vibration system to really bring the plane to life.

Guests were greeted as if they were arriving at an airport and taken to the dome through a glass tunnel simulating an Airbus fuselage. Once inside and sitting in their assigned seats, the crew proceeded to inform passengers of the usual on-board safety measures.

Afterwards, by means of a vibration system locked in synch with the 360° projection, people were given the sensation that the airplane was taxiing and taking off. Once "up in the air", and following the usual greeting from the captain, images were screened of Tenerife, the scheduled destination of the flight, as well as an audiovisual production describing Iberia Express's history and achievements. By means of a sophisticated mix of real and computer-generated images, the audience was able to experience the sensation of a real flight.

The six projectors were located on trusses at two metres high and secured on a platform designed especially by Newmedia for the occasion which allowed for the necessary adjustment between an angle of 0° and 65°.

7thSense's Delta Media Server system was used for the image processing, which was an uncompressed 4.4.4. TGA sequence. Medialon Showmaster show controller was also used to manage the peripherals. In addition, a Christie FHD461-X LCD flat panel was installed outside the dome to simulate the typical boarding gate screen with the time and flight number.

Blending and warping were critical in adopting the projection exactly to the curved surface of the dome on which the images were going to be projected. "In fact, this projection system is so complex that at some places there are over four blending points, in other words, four projectors had to be blended at the same point, and on a curved surface", explained Diego De Anna, before adding "we did both the blending and the warping externally from our Delta server, but just for the polar correction and self-alignment, because we were able to fully rely on the projectors' built-in tools which are absolutely wonderful."

The projection surface was 800 square metres and the resolution 2700 x 2700 pixels, which is close to 3K. The contents projected included CGI sequences, images shot in 360°, conventional videos in 4K and archive material from Iberia Express. Two sessions per hour were held over the three days.

With regards the performance of the Christie projectors, Diego De Anna was delighted: "If I had to score them from 1 to 10, I'd give them an 11 if I could. It was further proof, if needed, that we had made the right choice working with a brand like Christie. The quality of its products is incredible. In the past we worked with other brands but, as I've just said, they are the past; there is no question that Christie is the present and the future in visual solutions."

Meanwhile, Paloma Utrera, from Iberia Express, concluded: "The excellence of the 360° projection and the degree of immersion were truly fantastic. And I believe that the quality of the projectors was one of the critical factors in ensuring the success of the show. Everyone was pleasantly surprised with the space and the event itself, and I can safely say that we at Iberia Express were more than happy with the result. The event was spectacular and it went off as smoothly as you could have hoped for".