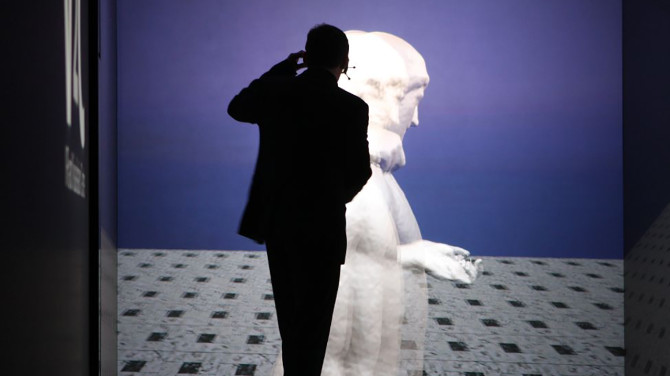 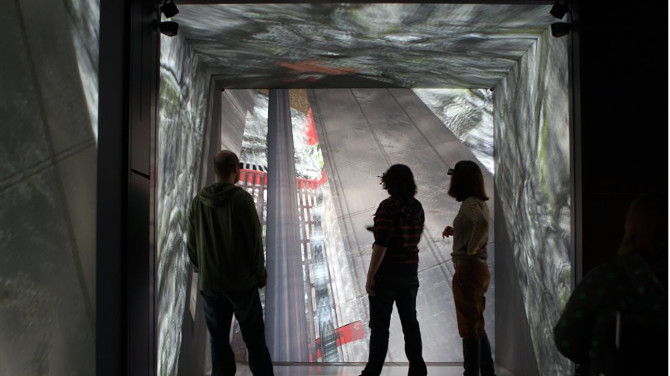 The Leibniz-Rechenzentrum (LRZ) in Garching near Munich (the common data centre of the Ludwig-Maximilians-University of Munich, the Technical University of Munich and the Bavarian Academy of Sciences and Humanities ) is home to a rather intriguing CAVE application. Several times a week, scientists from completely different disciplines such as archaeologists, architects, computer scientists, civil engineers, mechanical engineers and zoologists, call in - and they have all programmed something that they now want to visualise in 3D in a specially-equipped projection room. Equipped with active 3D shutter glasses they enter directly into the projection. The variety of disciplines means the bandwidth of applications is enormous.

In October 2012, the Centre for Virtual Reality and Visualisation (V2C) opened, since which time a 5-sided projection installation, which is illuminated from a total of ten Christie® active stereo projectors, has been added. The scientist involved - Dr. techn. Christoph Anthes from the LRZ - sees the whole thing as still being a 'work in progress'. “In July 2012 we had a first preview, then in October the inauguration, but we are still under construction, because new questions are steadily cropping up. ‘Regular operation’ would certainly still be stretching the description today.”

The aim of the system is to give users the possibility of completely immersing themselves within the three-dimensional space. For this reason, the installation is also equipped with an AR tracking system, consisting of a master controller and two controller nodes, which is equipped with four cameras and can be expanded to four further mobile cameras. Thus, the position of the user is detected and the viewing perspective of the user converted in real time on the projection representation. If the user moves inside the CAVE (Cave Automatic Virtual Environment), then the representation moves accordingly.

This new VR laboratory equipped by AV specialists Kraftwerk Living Technologies GmbH from Wels in Austria, was brought to life by the Project Manager Dipl. Ing. Johannes Schmidmayr, whose six-person team took about one year with the planning and the project.

The room itself is 12 x 13 metres and 12 metres high some of which is taken up by the built-in projection room. The ceiling height of 12 metres is fully utilised, since there are projectors installed above and below the cube.

A total of ten Christie Mirage WU3s are used for the rear projection within an active 3D system and project not just onto the front and the two side channels, but also the floor and the ceiling surface.

The Christie Mirage WU3 is a 3DLP® active stereo projector with an output of up to 120Hz and a WUXGA resolution of 1,920 x 1,200 pixels and its brightness of 3,000 ANSI lumens is ideal for applications of this type. All Mirage projectors are equipped with Christie Twist ™ which ensures seamless transitions in projections and, because of the short distances, lenses with a projection gap of 1.4 - 1.8:1 used.

Speaking about his selection of projectors, Johannes Schmidmayr says: “The decisive factor was the requirement for an active 3D system, so our decision was for the Mirage series. Our calculations have also shown that with the screen size of 2.7 by 2.7 metres, the 3000 lumens of WU3 are the ideal choice to achieve a decent ratio of brightness and simultaneously high contrast on the screen.”

A particular challenge for Kraftwerk Living Technologies was the fixing of the projectors, because these had to be decoupled from the construction of the projection room. Says Schmidmayr: “Vibrations could have occurred when entering the CAVE that led to a visible tremor. Once the projection room stood on the building itself, we had special wall mounts for projectors planned, built and assembled, so there are really no mechanical points of contact.”

Due to the spatial situation, all rear projections are deflected by means of mirrors, whereby projectors beam onto each projection screen, horizontally superimposed.

An SGI 10:2 cluster system serves as a media player. Here, a master computer serves as application computer with a second as a backup, as well as ten render nodes which prepare the content for the projectors. Crestron DigitalMedia is used for signal transmission and projection is performed onto five Stewart Filmscreen projection screens, with a 70 mm thick walk-on glass floor plate.

Whilst the installation of the Christie projectors caused no difficulties, a further challenge for Kraftwerk Living Technologies was installing the various software packages on the cluster.

Schmidmayr's conclusion is unequivocal: “Working with Christie projectors was fun thanks to the abundance of features provided by the Mirage series - such as integrated blending and warping - because these simplified the task substantially. Then there is the brilliant image quality and reliability in operation.

“During the entire time of commissioning, there were no technical problems. The projectors ran reliably and are still running, so we would of course also use these devices again for a similar installation. We have in fact used these devices previously in a similar set-up for a car manufacturer of note.”

Dr. Christoph Anthes from LRZ is also highly satisfied with the projectors used: "The stereo separation works perfectly, the projections are bright enough, the contrast and sharpness are staggering - and the devices have been running since installation without any further attention required. This is of course very important for us.”