Mapping the journey of Concorde

Aerospace Bristol tells the vivid story of the storied aircraft 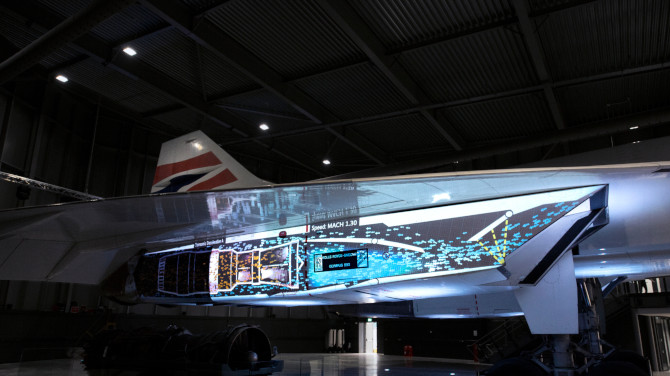 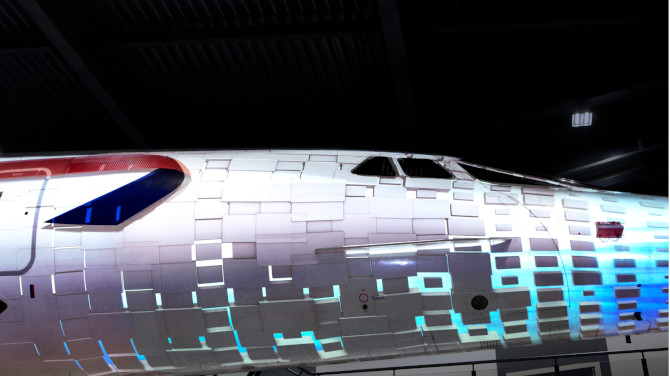 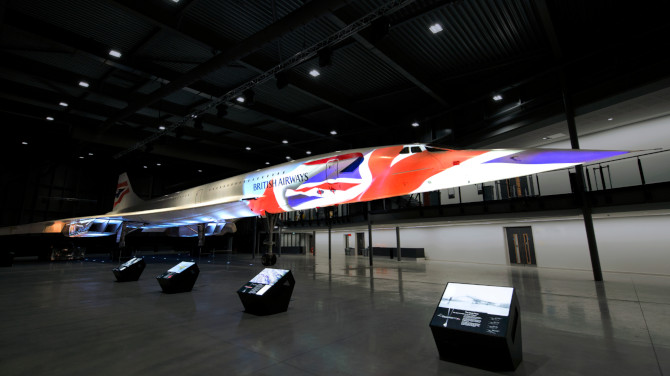 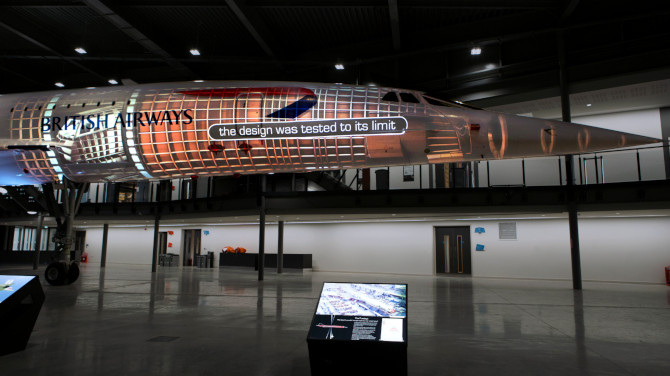 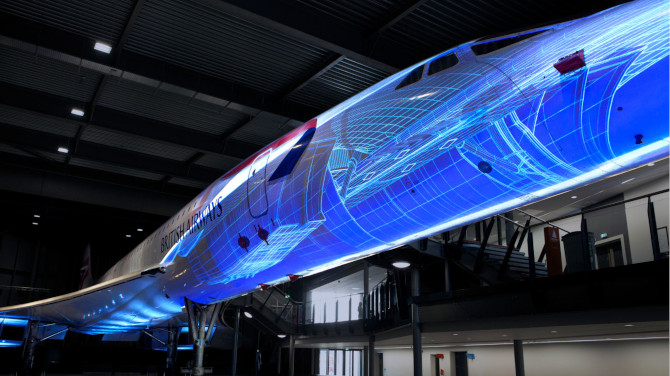 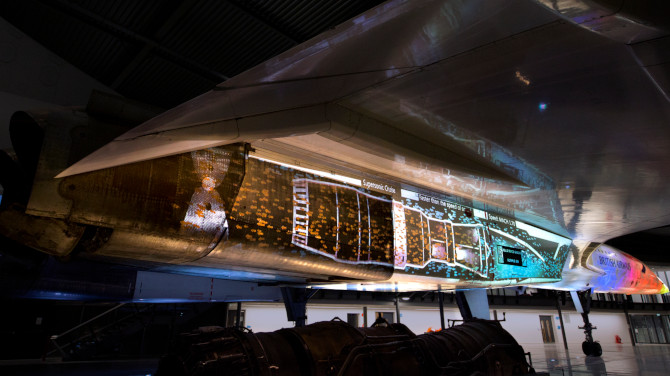 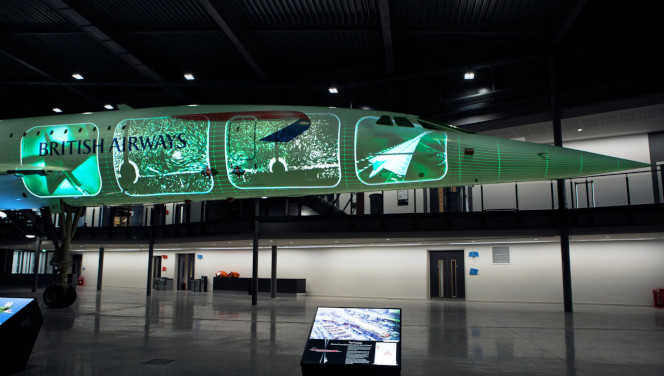 Mapping the journey of Concorde at Aerospace Bristol

With the ability to cruise at over twice the speed of sound and reach an altitude of 60,000 feet, the iconic Concorde airliner could cross the Atlantic in under three hours. Alpha Foxtrot – the last of the 20 supersonic aircraft to be built, and the last to fly – first took to the skies in 1979. Having touched down for the last time on Filton Airfield in November 2003, it lay dormant until 2017, when engineers from British Airways and Airbus carefully towed the iconic aircraft across Filton Airfield and into a new purpose-built hangar at Aerospace Bristol. It now takes pride of place in a specially constructed hangar, as the museum's star attraction. Creative production company PixelArtworks was tasked by exhibition designer Event to honour this astonishing feat of engineering, by telling the immersive tale of one of the most incredible aviation achievements of our time.

As part of the £19m museum project, PixelArtworks opted to use four Christie D13WU-HS laser projectors to deploy Alpha Foxtrot as a unique storytelling projection mapping canvas. Custom content fusing iconic footage with exclusive interviews and graphical effects is mapped on the right-hand side of the front fuselage to take visitors on a journey through Concorde's storied past. The 12-minute animation is divided into six separate stages, from the initial Concorde design to the technical intricacies of the engine, with celebrities including Joan Collins, George Harrison and Andy Warhol pictured on board, as well as Union Jack iconography, flightpaths, and x-ray images of the iconic aircraft. Audio completes the experience, with commentary from engineers, pilots and stewards with first-hand experience of working on-board, bringing this modern-day example of aviation excellence to life.

"We created three chapters of content for the animation, the first being the making of Concorde," explained Gavin MacArthur, Creative Director, PixelArtworks. "Here, our aim was to capture the history and challenge of the project, and the massive engineering undertaking involved. For a team from Filton to attempt this and be successful was an amazing achievement, and we wanted to capture that success in this exhibition. The second chapter was technical design. There were so many technical hurdles to overcome, and everything was done from scratch. From the cooling system, to power – so many things needed to be designed and tested. The third and final chapter centred on the emotional connection of those involved. From the pilots, engineers, and the people that built them; everyone has an emotional connection that was central to this project. In this hangar, Concorde is the one standalone plane – it is the hero, and our creative is the focus of that."

PixelArtworks was able to work with pilots, engineers and stewards who originally worked on Concorde, providing key insights and anecdotes from their involvement. "It wasn't just technical, it was very moving," comments Gavin. "One thing that was apparent was a lot of people put a considerable amount of time into the Concorde project. It was a beautiful plane, you can't spoil it by putting bad content onto it, you've got to do it justice and make sure the information is technically correct."

To ensure the content was appropriate for the exhibit, it was tested on a 3D model in the studio, allowing the client to see a visualisation before the project's completion. The model was created using a laser scanner on the one-of-a-kind aircraft, taking accurate measurements of over three million points. PixelArtworks completed 50 different scans, allowing them to combine all the points to form one three-dimensional point cloud, resulting in an accurate model.

In the installation, Christie's D13WU-HS projectors run at 50hz in WUXGA resolution. "After installing Christie laser projectors in previous installations, we knew that it would provide the right balance in terms of chassis size, with all the control capabilities we needed," said Jackson Taylor Head of Technology, PixelArtworks. "Having the laser light source means it has a five-year light time, which was ideal for this project. Four of the projectors covered the third of the aircraft with ease, so it was very visible. It's not very tall, so they are zoomed in quite close and as a result, it looks bright and really stands out. As the unit has HDBaseT, it made our installation easy – as we didn't need another receiver pair, we were able to run a Cat6 cable straight into the projector."

PixelArtworks also designed the custom housing for the projectors, which were mounted on the ground to ensure the viewing angle was aligned with the optimum projection angle, for the best possible viewing experience. The housing is elegantly concealed and forms four information points providing more details about the design of the aircraft.

More than 150,000 visitors went through the doors within the first ten months of the attraction opening, with scores of five-star reviews posted across websites such as TripAdvisor, Facebook and Google.

"I was really proud of this project, when you work on it you almost have these blinkers on; it's hard to stand up and appreciate. When we watched it through for the first time, we knew it was a job well done, and the reaction you see makes it a lot better," concluded Gavin.