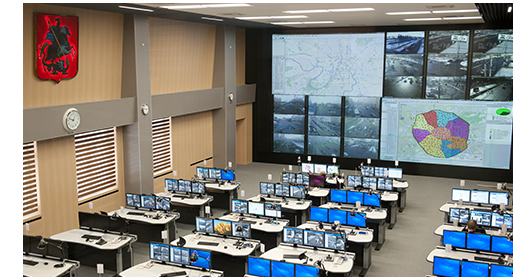 The Moscow Traffic Management Centre, opened at the end of 2013. Located on 2nd Lesnoy Pereulok, the centre was built to manage the city's entire transport network. Since launch the centre has introduced real-time traffic regulation measures and the ability to regulate traffic; to give priority to public transport.

Maksim Liksutov, Head of the Department for Transport and Road Infrastructure Development of the City of Moscow, "the centre has benefited from the experience of similar centres around the world, such as the one built in London for the 2012 Olympic Games, and is the most advanced of its kind in Europe; employing some of the most ground-breaking modern technology".

The centre is unique given the volume of traffic data collected and analysed; and in the sophistication of the system. The centre ensures regional traffic administration teams collaborate in the decision making and management of Moscow's transport network. The goal? For the Moscow Traffic Management Centre to deliver residents and visitors to the country's capital a seamless transport infrastructure, across overground and underground road & rail systems.

The goal was set by the Moscow City Government and has led to a state of the art traffic management centre that monitors and responds to data from 1,698 traffic lights, 2,048 cameras, 6,741 detectors and over 100,000 parking spaces in Moscow. Every 1.5 seconds, information is collected from 6,741 sensors covering every traffic lane on Moscow's major highways.  Capturing not only a very visual representation of traffic flow in the city, but also the speed of traffic, volume of traffic and the capacity of the road network – all in real time; allowing operators to respond with mathematical precision.

SITRONICS CAMS (Complex Automated Management Systems) was the systems integrator for the project, using Christie data display and management systems to help the regional administration teams to work together and co-ordinate their activity. Christie has over 25 years of global experience in developing purpose-built solutions for command and control environments, not only for transport network but also utilities, telecommunications and security. Of course it takes a certain expertise to support these technologies and Sitronics Cams were assisted by Christie's local partner Paravan Technologies.

A total of 40 (8 x 5) 67" Christie Entero HB video cubes have been used in the control room video wall. The video wall resolution is 11,200 by 5,250 pixels (totally 58.8 million pixels). There are two similar video walls in the press centre and crisis centre, consisting of 24 (6 x 4) Christie MicroTiles with the Christie Interactivity Kit (a multi-touch control system) and a Christie TVC-700 video processor. MicroTiles are an award-winning modular system that can be reconfigured or redeployed should display requirements or location change). The conference room is equipped with a Christie G Series 1DLP® projector.

In Moscow, 11,500 buses, trolleybuses and trams equipped with global positioning systems (GLONASS) send their coordinates to the central video wall every 2–3 seconds while travelling. Here, their movements and timetables are monitored. Public transport operator Mosgortrans and the Moscow traffic police, also part of Moscow's intelligent transport system (ITS), receive the same information. In addition, around 300 mobile Parkon video systems are in constant movement around Moscow, transmitting data to the Moscow Traffic Management Centre.

"Display systems and communication channels to coordinate operations are a key aspect of the system, but at the same time, they are only a small part of the technology at our disposal – just the tip of the iceberg. So much depends on the visual display system, which has been designed to make it easy for operators, analysts, managers, the traffic police and the entire service to use on a 24/7 basis", says Farid Volkov, Deputy Director of Paravan Technologies.

Images can be comfortably viewed from any position: from inside the room, from the crisis centre and from the reception area located on the floor above. The Christie Entero HB video projection cubes are the brightest "The image created by the DLP rear projection system and LED projection modules doesn't strain the eyes over the course of the working day. Employees can adjust the brightness of the video wall depending on the lighting, the nature of the image and the time of day", says Gennady Trusov, Chief Project Engineer and head of the project implementation team. All the video content is created, switched and displayed in DVI format. The images mostly consist of multi-window live video streaming and complex mapping images, either static or slow-changing. The content comes from controller workstations, Extron VNC network decoders and Apple TV.

A total of four Extron Quantum Elite multi-window image video wall processors are employed for the main wall in the control room, as well as an Extron FOX 14000 96 x 96 central matrix switcher. A LAN and video conference subsystem have been installed using Cisco equipment. Biamp Nexia audio processors and Extron MPA amplifiers have been used, while Crestron AV3 was selected as the control system

Moscow Department of Transport systems are connected via a virtual matrix: employees in different traffic centres can exchange video content and provide colleagues elsewhere with graphic and video analysis or observations. Authorised inspectors and managers are able to control information boards and traffic lights, and communicate in real time with the traffic police, overground and underground rail services, and parking officials.

Despite the short timeframe available for the installation and set-up of the equipment, which took place throughout December 2013, the project was completed without any particular complications or difficulties. Any issues which arose were quickly resolved by Paravan Technologies and Christie's expert technical support team.

The Moscow Traffic Management Centre is currently operating on a test basis. The situation centre employs 51 people and is in the process of developing internal operating procedures and external coordination. In the future, the centre envisages operating around the clock, employing 255 people. It will support the work of the traffic police, EMERCOM, the police force, and the ambulance service. However, broadly speaking, the objectives of the project have already been achieved. The switching and visual display system is extremely flexible and reliable; the control system provides free switching from any source to display devices in six areas of the Centre and group settings (pre-sets), thanks to the use of a matrix switcher with 96 inputs and outputs.

The Christie Interactivity Kit, used twice in this installation, on the two MicroTiles video walls, is a set of modules specially designed to fit around the perimeter of MicroTiles video walls. The Interactivity Kit turns the video wall surface into a large sensor providing touch management and interaction of on-screen content, even the addition of graphical images and notes drawn directly on the display. Thanks to its structure, the Interactivity Kit can be configured to fit around video walls of 84 different sizes. It is also easy to connect: directly via a USB-port, with no need for drivers. The multitouch control has been developed using Baanto™ ShadowSense™ technology.

Speaking at a press conference, Maksim Liksutov noted that the first results of the Moscow Traffic Management Centre's work have now been released: the number of road traffic incidents has fallen by 17.5% in places where cameras and video technology have been introduced. Importantly, these systems make it possible not only to collect data, but also to analyse it instantly. These processes will be automated to an even greater degree in the future.

As Moscow Mayor Sergei Sobyanin noted at the opening of the Moscow Traffic Management Centre, this is the initial result of three years of work to create an intelligent transport system for the metropolis. The Christie visual display systems installed here form the core of an extremely complex system for carrying out the most demanding tasks, both now and in the future.

A cost-effective video wall controller for command and control applications.