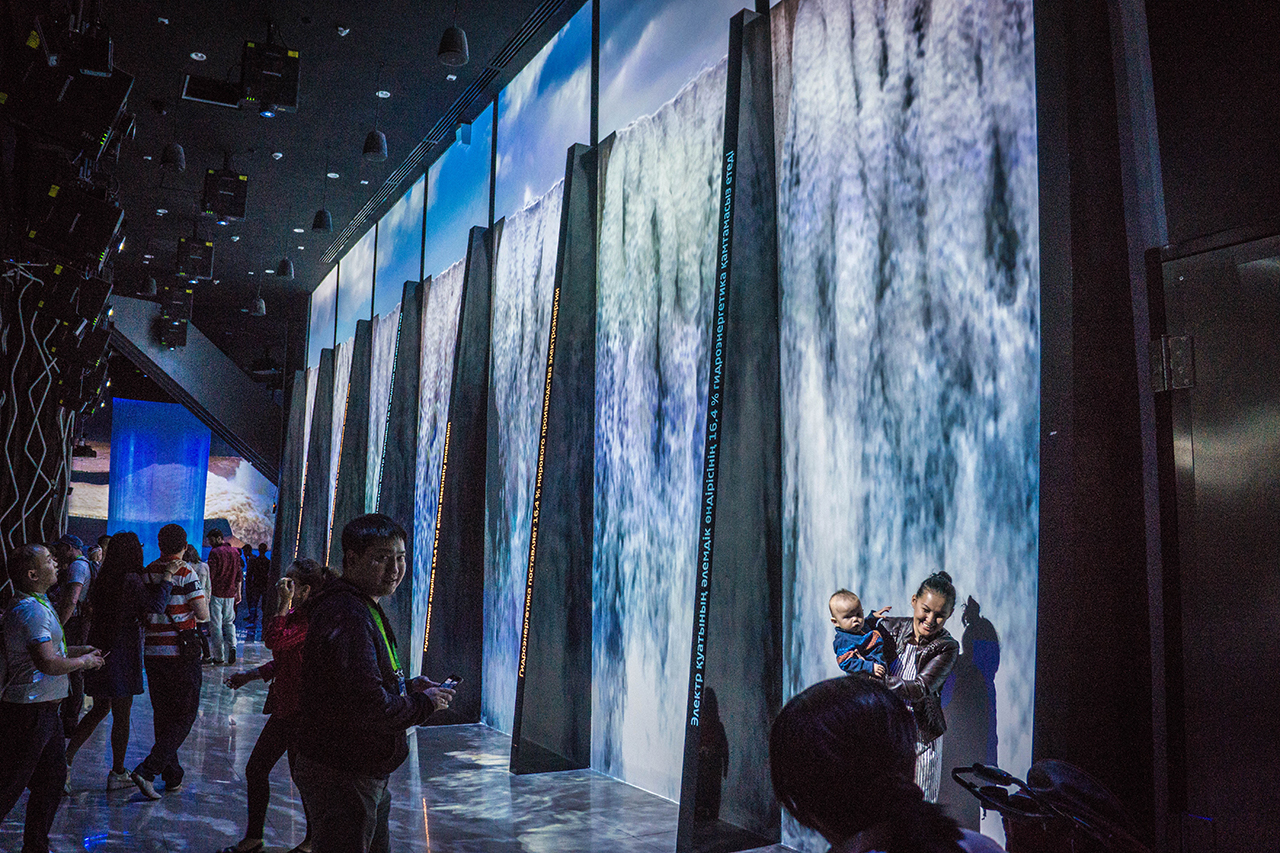 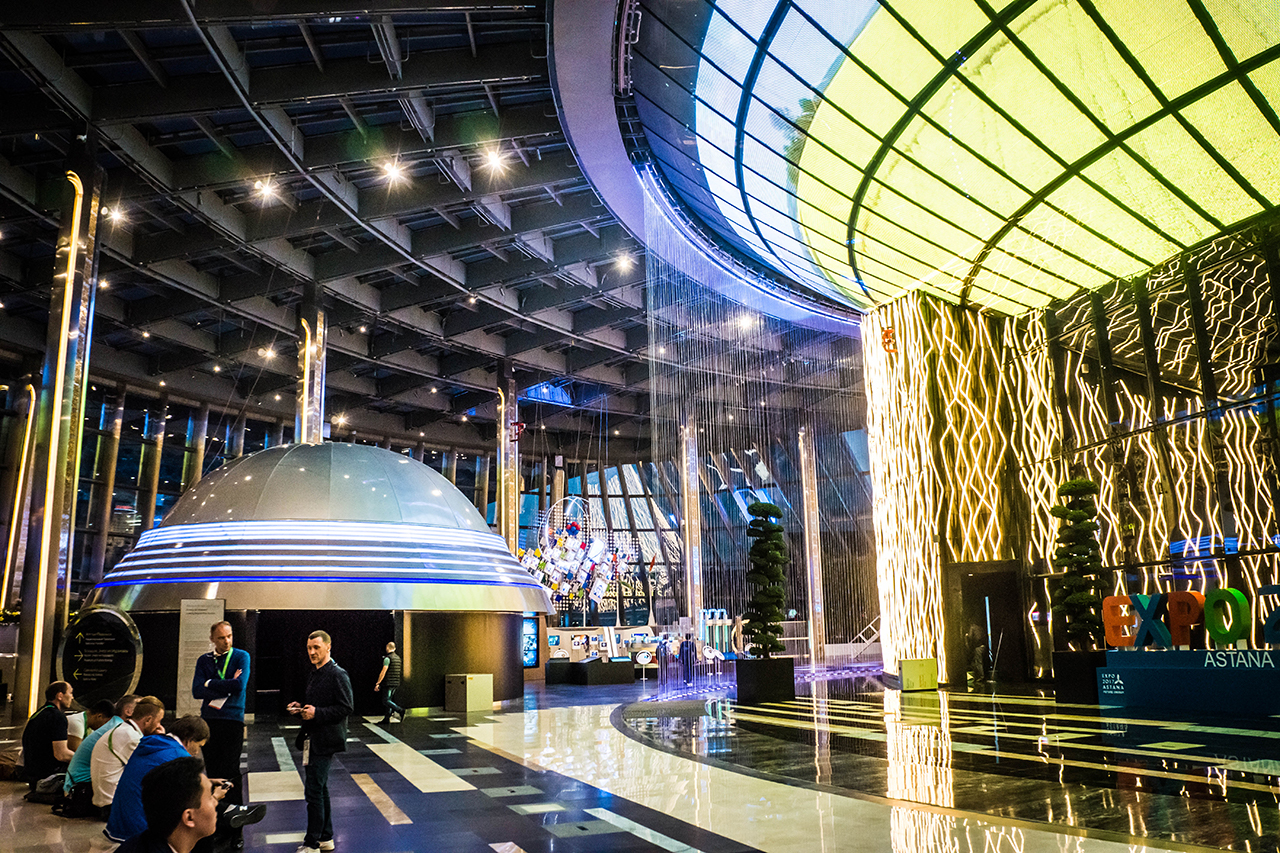 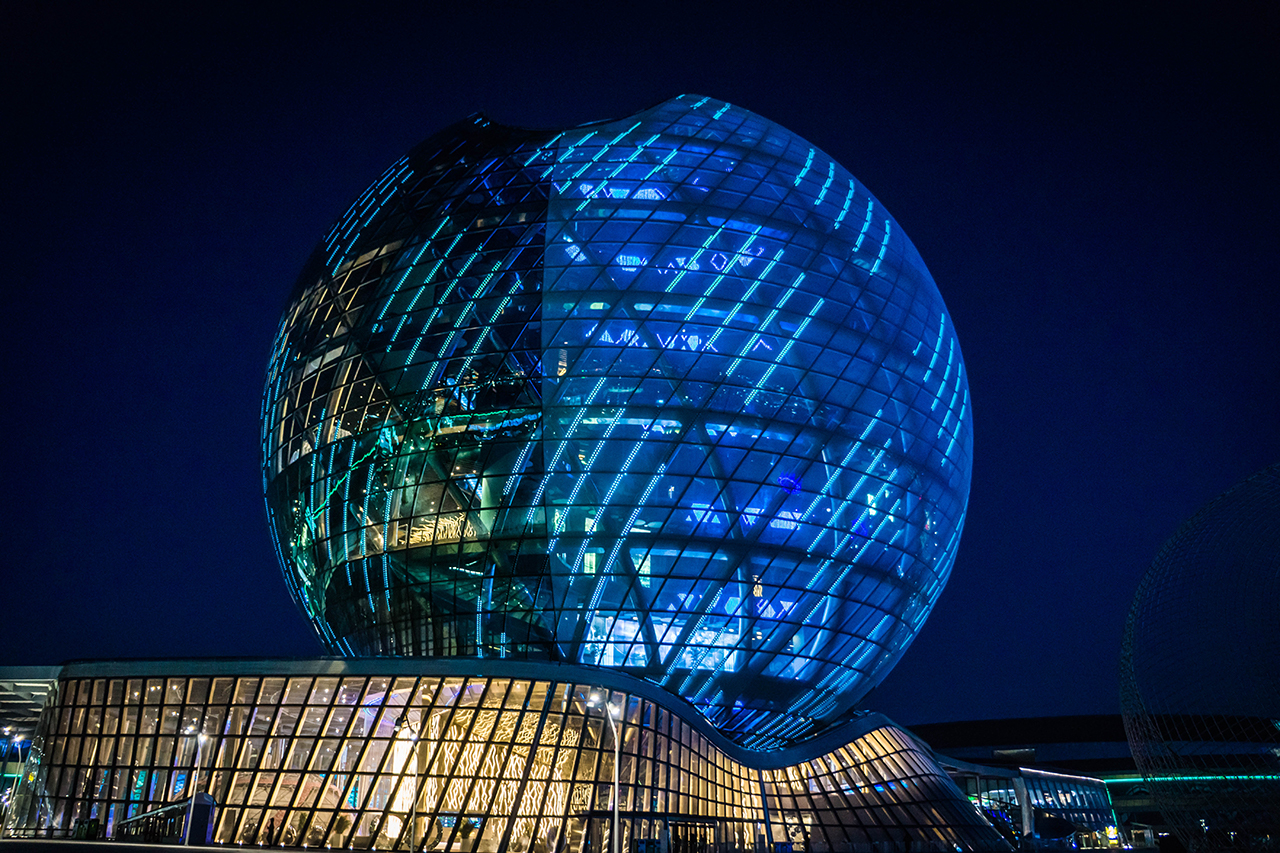 The world’s leading experts in show control met in Kazakhstan to fill the planet’s largest spherical building with stunning audiovisuals. The occasion was Expo Astana 2017, for which they used 200 Christie® Pandoras Box systems to bring to life 34 audiovisual installations in what was probably one of the biggest projects in the history of this product, conceived specifically for the design of multimedia shows.

In setting up this hugely complex project, where the equipment had to operate in extreme conditions, Pandoras Box proved just how sturdy it is. Despite temperatures of minus fifteen degrees and a number of snow storms during the installation, only two graphic cards suffered any kind of damage. The success of the product was such that Christie has already received orders for Pandoras Box for upcoming Expos.

The building in question is the Nur Alem pavilion, the hub of Expo Astana 2017, whose slogan was “Future Energy”. Measuring 100 metres high and with a diameter of 80 metres, the 26,000 square metre pavilion is divided into eight floors, each one dedicated to a different type of energy.

But, let’s start at the beginning. The Turkish construction company Sembol, the main contractor for Expo Astana, commissioned its fellow Turkish company Astel Electronics to supply and oversee all the Pandoras Box systems in the building. The integration was then delegated to three companies—Adunic(Switzerland), Acciona Producciones y Diseño (Spain) and Simmetrico (Italy)—which in turn subcontracted a dozen companies and freelancers with proven expertise in Pandoras Box from all over the world.

The sheer complexity of a project of this size called for the world’s installation experts from several countries, who worked for two and a half months on installing and programming the systems under the supervision of a team of four engineers from Astel.

Pandoras Box was the core element in controlling the hundreds of different laser projectors, displays, video walls, PCs and digital devices used in Nur Alem to run videomappings, immersive projections, interactive installations and all kinds of audiovisual elements throughout the building’s eight floors.

Yakup Karabag, electrical engineer at Sembol, had this to say: “it was not our first project with Pandoras Box as we had already used it in the presidential Museum and Library in Astana in 2014. So it was already familiar to us and we knew that it would guarantee the reliability we were looking for in a project of this magnitude.”

He went on to add that: “Its main strongpoint is the scalability if offers, and the fact that it is a network-based VNC solution. With Pandoras Box it is possible to have everything from a stand-alone single-channel player to a large scalable system with hundreds of channels.”

The Spanish company BGL was in charge of the audiovisual engineering for the first and second floors of the building. The first floor was dedicated to the host country, Kazakhstan, and the second floor to hydraulic energy.

The second floor contained many mappings with warping and blending, including an interactive one that recreated water on the floor with 20 projectors, another one used 14 projectors to recreate seven waterfalls, while a third installation simulated a turbine on the outer face of a cylinder.

All these projections, as well as other monitors and plasma walls, were run by around twenty Pandoras Box systems, including Quad servers, Players, Compact Players and Managers. In addition, a Widget Designer controlled the whole floor, not to mention the automated on/off control of equipment so that they would come on automatically in the morning and turn off at the pre-established time in the evening.

David Gálvez, Spain’s leading expert in Pandoras Box and founder of DG Visuals, played a crucial role in the programming and technical support for the projections on the second floor, working under the English company Aquapixs managed by Patrick Verhey. “The truth is that it was an incredible project to work on, with dozens of audiovisuals spread over eight floors and co​ntrolled exclusively by Pandoras Box”, Gálvez recalls. “This system was able to keep all the reproductions synchronised to perfection, despite the huge complexity in combining loads of different technologies in one single place”.

One of the standout installations on the first floor was Canopy, consisting of a triangular structure screening immersive projections of Kazakhstan landscapes using 40 projectors. This show was synchronised with an interactive installation in which visitors could learn more about the famous Kazakh myth of Bayterek.

The German companies AV Active and Burmester were instrumental in the audiovisual integration of the first floor. Benjamin Brostian, CEO of AV Active, told us “it was really incredible. The first floor of the building was controlled by a central Widget Designer, a key tool that ran dozens of displays, computers, projectors, lights…”

He added: “Pandoras Box guaranteed us incredible flexibility in managing the contents and programming the timeline. Not to mention the system’s reliability, bearing in mind that it was in non-stop use 24/7 for three months. I would safely say that it was one of the most complex installations we have worked on in recent years, but it is was clear from the beginning that Pandoras Box was the best possible solution. Owing to the large number of unknown and unpredictable factors you are faced with in a building of these characteristics, I have to say that we felt that we were in safe hands with the best possible tool available to us.”

For José Chorro, director of Audiovisual Services at BGL, “one of Pandoras Box’s strongpoints is its ability to integrate in one single solution both the production (composition of images, blending…) as well as the control of the shows.”

Working at minus 15 degrees

The German integrator Neumann & Müller looked after the design and installation of the AV systems on floors three to six, where there was no more nor less than 930 different 55” displays providing visitors with information. The most noteworthy installation here was the 360 degree projection made with 14 projectors which reproduced a 13 metre diameter solar sphere explaining the influence of the Sun on life on Earth. A variety of LED luminaires, projections and printed elements were also used to simulate activities on the surface of this Sun.

Neumann & Müller used Pandoras Box servers and players to run videos, while various units of Pandoras Box Quad Server were used for the mapping projections. In addition, it also used Widget Designer -in some cases installed in touch panels- to remotely control all the servers, projectors and displays.

Felix Erdmann, project manager at Neumann & Müller, said: “Pandoras Box is a highly reliable system for large scale installations. In this project we installed over 70 servers and players and we only had a very small number of minor hiccups that we were able to resolve in a few minutes. The hardware is sturdy, especially when you factor in the really tough atmospheric conditions. At the time we installed the servers, the temperature in the building was 15 degrees below zero. And then there was also the usual heavy dust of a building under construction. Even still, everything worked to perfection.”

The long waiting times in between snow storms became part of the routine for the 80 N​eumann & Müller technicians working in Astana, including Germans, Portuguese, Spanish, British, Russians, Ukrainians and Kazakhs. “Another big challenge was the little time available for setting up, programming and getting the installations up and running. But our engineers in Germany have a lot of experience using Pandoras Box, and they gave 150% to get the job done on time.”

The common language of Pandoras Box in a multi-national team

Kaan Kısakol, general manager of Astel, praised Pandoras Box’s role in executing the project to perfection despite the enormous complexity. “Besides the most celebrated features of Pandoras Box, like warping and edge blending, its reliability and other special functions such as interactivity also proved a great help to us. At the same time, its hardware is so robust that, even though there such a high number of Pandoras Box products, our technical team only had to change two defective graphic cards during the whole installation.”

He concluded: “In a multinational project of this kind, everyone managed to communicate easily thanks to the common language of Pandoras Box, which made it very interesting for our team.”

Mike Steinbrecher, Global Technical Sales Manager for Pandoras Box in Christie, summed it up as follows: “We have a slogan ‘You’ve got the skills. We’ve got the tools’ and what’s so great is that with this installation we pretty much hit the nail on the head. It couldn’t be a better example of how flexible and easy-to-use the software really is - it could handle so many totally different uses and setups. That means that any technical request that comes up during such a big install can be covered by our Pandoras Box and Widget Designer. That makes things so much easier for all the integrators as they only have to find operators and programmers for one single software. Also, in the case of needing support, it is much easier as they have only one manufacturer to reach out to.”

Steinbrecher explained that Christie has already received orders for Pandoras Box for upcoming Expos, and, before finishing, he wished to underscore the improvements in the system’s version 6: “Since we released Pandoras Box V6 and Widget designer V6 last year, which went on to win several awards, we have implemented a lot of new features like Multi-user, UV mapping directly in the preview, or editable meshes for on-the-fly FFD and vertex warping which makes it faster and easier for the user to program than ever before. The new features on our roadmap are being rolled out on time and we are looking forward to pushing the boundaries even further with new updates to come.”