The Phoenix Convention Center held a four-day event featuring politicians, cable news hosts, and musical guests. Presented to a live audience of approximately 8,000, a broadcast audience as well as online, the event was a complex production – which also included massive LED displays that enveloped the stage. Produced by MOSAIC ProEvents with screen switching and management designed and managed by High Resolution Engineering and Jess Darin, two linked Christie® Spyder X80 processors were selected to manage feeds and drive content to the LED displays.

MOSAIC ProEvents was engaged to produce the event, and to create something massive with considerable “wow factor”. Six months prior to the December 2021 event, High Resolution Engineering and Jess Darin, freelance high-res video engineer, were brought on-board to manage the video and screen feeds. 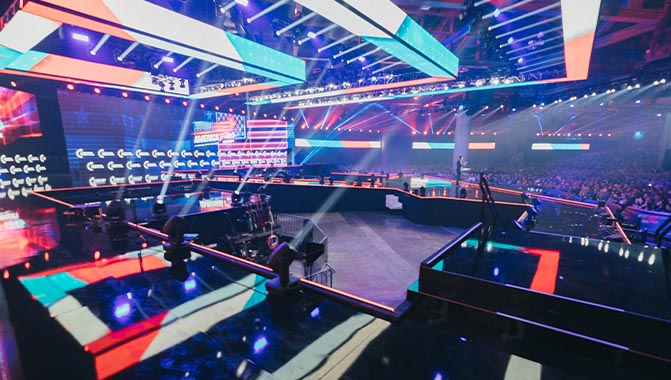 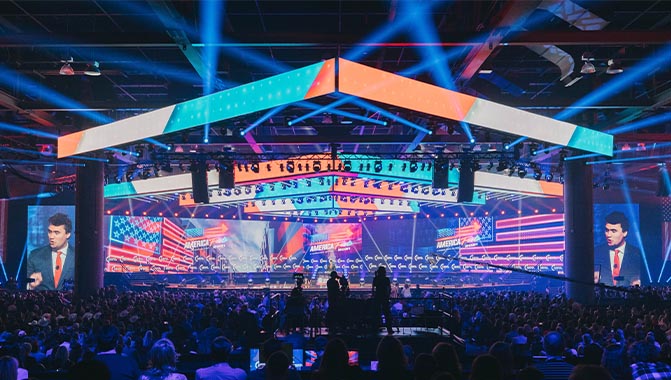 The stage set-up included LED screens on the sides and back of the stage and hung from trusses above. LED was also wrapped around the room; in total, the LED was approximately 115 million pixels. The production also included backstage monitoring, multi-viewers for talent, and green room feeds. To manage the inputs and outputs for the event, High Resolution Engineering selected two linked Christie Spyder X80 processors, capable of managing a combined 160 million pixels, with a total of 48 inputs and 32 outputs and 4K support on every channel.

Drew Taylor, Owner and Video Engineer, High Resolution Engineering, noted the scale of the event: “The LED enveloped the stage, went out into the audience and wrapped around the room - all the way to the back, and also on the ceiling. That’s what drove the need for the Spyder X80s – with that huge amount of LED, we just had massive overall resolution, and pixels, to manage.”

Adds Taylor, “Beyond the LED screens, there were a lot of displays that we provided feeds to. The downstage monitors that the presenters look at, there’s video feeds to go to the web for streaming, backstage monitoring and multi-viewers for talent before they go on stage, as well as greenroom monitors.”

Due to the scale of the event production, two Christie Spyder X80 processors were linked to create a parallel system. Forty-six of the 48 available inputs were used, as well as 30 of the available 32 outputs. “We had millions of pixels to manage, with 17 4K LED processors out of the Spyder X80s. We linked the Spyder X80s to run in parallel and overall, we were driving just under 115 million pixels,” says Taylor.

High Resolution Engineering has been working with Christie Spyder multi-windowing processors for over 15 years and counts them as an integral part of their fleet of products. “We’ve stuck with the Spyder because it continues to be the number one processor as far as horsepower and the amount of cutting- edge technology built in,” says Taylor.

The size and scale of the event was the biggest challenge, but High Resolution Engineering and Darin spent considerable time planning and in pre-production with the client to ensure everything would work as anticipated. “Anytime we use linked systems to drive that much content, it’s a lot to manage. That’s why I trust the Spyder X80 – it does a great job,” says Darin, “The Spyder X80 was the obvious choice for this event. It’s my preferred box, and I just love the flexibility and horsepower that it has. It was absolutely what was needed to be used for this environment.”

The event was a tremendous success for all parties involved, so much so that, “There’s talk of creating a bigger event next time!” says Taylor.