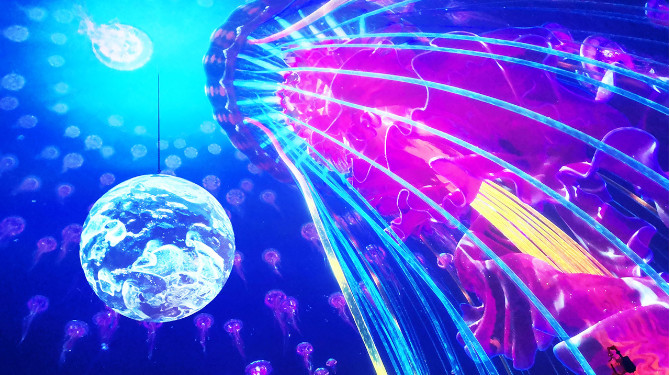 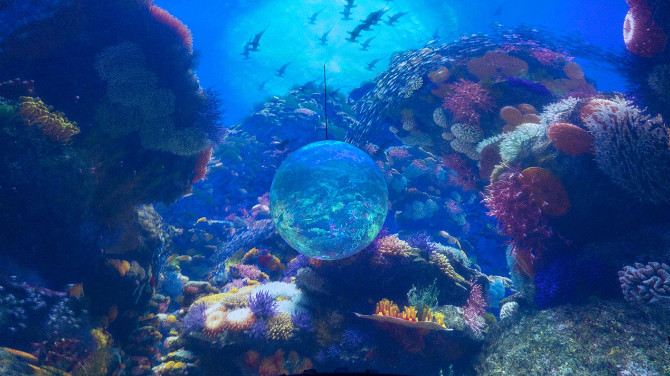 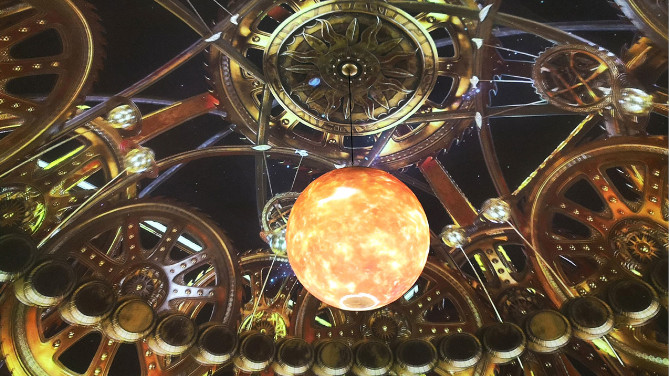 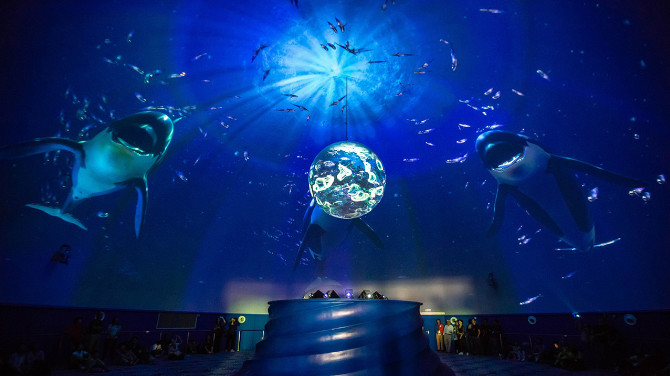 How do you set your full-dome theater apart from the rest? For operators of the Shanghai Haichang Ocean Park, the answer is simple, yet novel – create a twin-dome theater!

That’s what the theme park operator did when it constructed a new dome theater that aims to deliver spectacular visuals and a heightened sense of immersion to visitors. Known as the Shanghai Haichang Ocean Park Sky Theater, it features a unique twin-dome design comprising an enormous 160-degree dome measuring 24 meters in diameter, and a smaller three-meter wide spherical dome that hangs from the ceiling in the middle of the sprawling auditorium.

The full effect of this unique twin-dome theater has been brought to the fore through a rousing marine-themed show titled “Ocean & Universe”, which showcases the evolution of the universe and how numerous species of marine life have thrived throughout that history. Visitors are able to experience highly-realistic imagery such as enormous blue whales swimming overhead, vibrant corals teeming with bioluminescent fish, and vast blooms of jellyfish decorating the surface of the ocean with a myriad of color.

The first-ever twin-dome theater in China

Since its official opening in November 2018, the Sky Theater has earned critical acclaim for its realistic images and exquisite films. This led to the twin-dome theater clinching the coveted “Best Tourism Industry Innovation Award” during the 8th China Tourism Investment ITIA Awards.

The visuals on the larger dome are powered by 21 Christie® DWU850-GS laser projectors blended together to deliver ultra-sharp 6K resolution, while the smaller spherical dome is lit using four Christie DWU599-GS laser projectors. All 25 units are installed and commissioned by Christie’s longstanding Chinese partner Wincomn Technology, which is also responsible for the venue’s projection design.

Tony Chen, General Manager, Wincomn Technology, said, “This is the first time that we have completed a twin-dome projection system for a dome theater in China, and we are very pleased to master this presentation style after many rounds of trials and tests. This installation requires projectors with a small footprint to remain out-of-sight during the shows, yet still provide the highest quality images, life-like color reproduction and reliability. The Christie GS Series fits the bill perfectly.”

Chen noted that the main challenge faced by the Wincomn team during the installation was to ensure that the projection light path of the projectors would not affect the two dome screens. “The contents displayed on the two domes not only need to be synchronized, the projection of both dome screens must not exhibit any occlusion either. Thankfully, with the delicate light path design and precise blending and warping capabilities of the Christie GS Series projectors, we are able to solve the occlusion problem and deliver a spectacular show.”

Chen added that the dynamic visuals in the Sky Theater have benefited from Christie’s proprietary BoldColor Technology​ included in the 850-GS, which creates the color balance needed to accurately reproduce colorful images, without sacrificing brightness.

“The visuals look much better than what we had expected with Christie BoldColor Technology. By using blue and red laser diodes as well as a patented optical chamber, video processing, and specialized software, it’s able to deliver enhanced color and saturation and more lifelike visuals when compared to typical laser projectors,” he said.

Ernest Bakenie, Director of Sales for Asia Pacific, Entertainment, Christie, commented, “I congratulate Tony and the Wincomn team for delivering yet another spectacular installation at the Shanghai Haichang Ocean Park Sky Theater, with an unprecedented and superb projection design using 25 Christie GS Series​ laser projectors. This is a brilliant combination of innovation and technology that gives rise to a highly immersive visual experience for all visitors.”

Audiences who watched the “Ocean & Universe” show at the Sky Theater were not only impressed with the projection design where the GS Series projectors are strategically fitted and cleverly obscured from view, they are also mesmerized by the powerful visuals displayed on the domes.

One visitor remarked, “The bright, vivid images displayed on the large and small domes, combined with a strong sense of presence and immersion, offered a highly realistic and enjoyable experience for both young and old. This is my first time watching a movie in a twin-dome theater, and the feeling is simply awesome!”