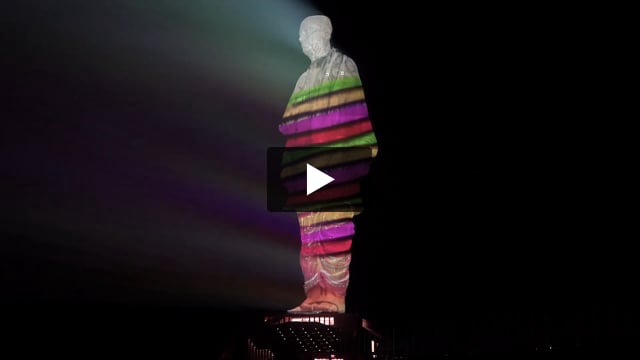 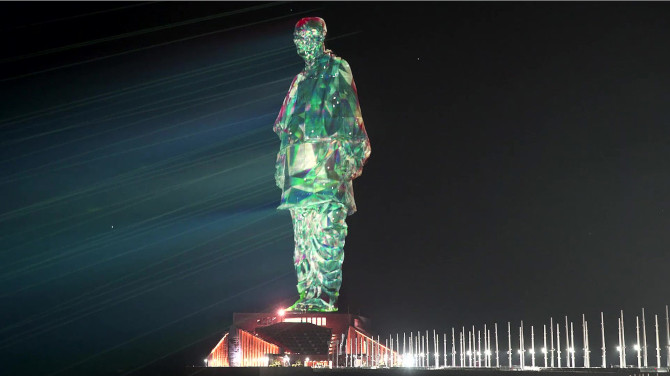 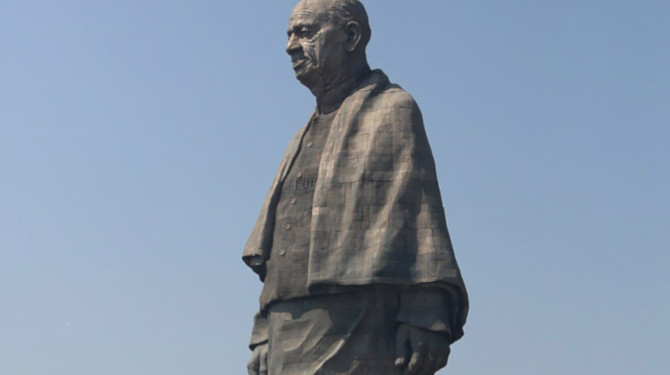 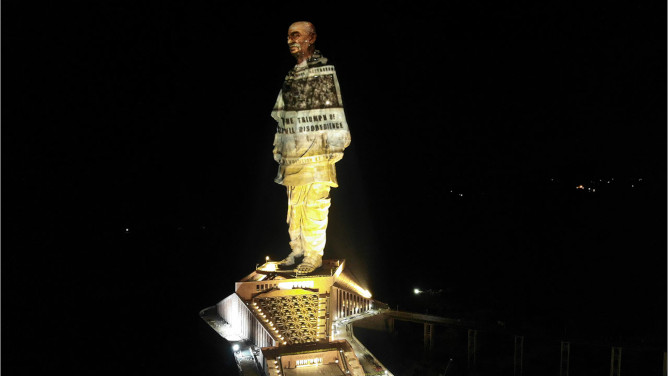 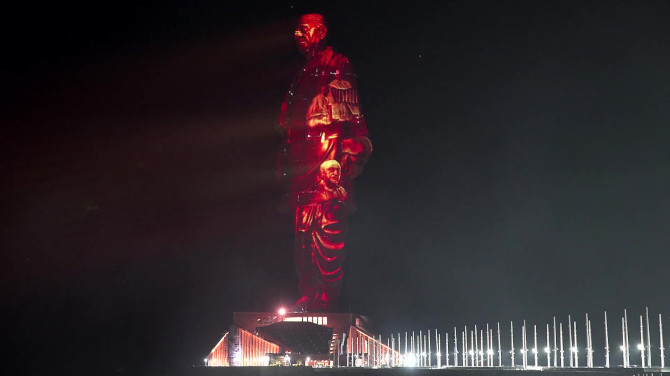 The Statue of Unity, the world’s tallest statue, is dedicated to visionary Indian statesman Sardar Vallabhbhai Patel. It was officially unveiled by Indian Prime Minister Narendra Modi on October 31, 2018, amid much fanfare. Standing at a height of 182 meters (597 ft.), the bronze-clad statue is twice the height of the Statue of Liberty and 29 meters taller than China’s Spring Temple Buddha, which previously held the title of the world’s tallest.

Located in the state of Gujarat near the Sardar Sarovar Dam on the Narmada River, the Statue of Unity is designed by renowned Indian sculptor Ram V. Sutar and took five years to build. It features a naturalistic and historically accurate representation of Sardar Vallabhbhai Patel, donning characteristic garments and in a walking stance.

The late Indian leader, dubbed the “Iron Man of India”, played a leading role in the struggle for independence and guided India’s integration into a united, independent nation. The local media describes the Statue of Unity as an “architectural and engineering masterpiece”. Among the key attractions are a viewing gallery at the height of 153 meters that offers breathtaking views of the Narmada dam and a museum focusing on the life of Sardar Patel.

During the day, the magnificent statue is a sight to behold and can be seen from as far as seven kilometers away. As night falls, its façade becomes the canvas of a fascinating projection mapping showcase depicting Patel’s life and achievements. This amazing spectacle is accomplished by Christie’s valued Indian partner Pyramid Technologies and renowned German laser show producer HB-Laser using a total of 51 Christie® Crimson WU25​ 3DLP® laser projectors. The team is responsible for the complete design, content creation and storyboarding, supply, installation, testing and commissioning of the Crimson projectors as well as specialized lasers manufactured by HB-Laser to present a professional and engaging show. This is the largest ever deployment of high-brightness projectors on a colossal statue anywhere in the world.

Ajay Parwaney, Managing Director, Pyramid Technologies, said the team’s ultimate goal is to create something unique and ground-breaking that generates a big impact worldwide. The show has to be realized in a way that supports the Statue of Unity’s massive appearance and includes a balanced mix of audiovisual elements that resonate with audiences to deliver a highly memorable experience.

“We are honored to be involved in this monumental project from the conceptual stage during which we participated in a detailed projection study that resulted in the Christie Crimson Series emerging as the preferred choice of projectors for the projection mapping showcase,” he noted.

Parwaney noted that the Crimson Series was selected for a number of reasons, such as its IP5X-sealed solid-state laser light source in a rugged and compact chassis and its ability to provide years of reliable and virtually maintenance-free operation. He added, “These specifications are important to the client as the required projection systems need to withstand inclement weather conditions. On top of that, the availability of the longest throw lens that can project bright and vivid images on this 182-meter high statue was another major reason why the Christie Crimson clinched the job for this project.”

Complementing the projection mapping showcase is a mesmerizing laser display executed by HB-Laser, which has almost 30 years of experience in laser show, multimedia and video mapping projects. Harold Bohlinger, managing director, HB-Laser, said, “We’re honored and delighted to celebrate the life and achievements of Sardar Patel through the design and commissioning of an exciting laser light show on the Statue of Unity using the Christie Crimson projectors. By combining and synchronizing the various multimedia elements together, we are able to tell the inspiring life story of the visionary Indian leader in an engaging manner, whilst delivering a massive multisensory impact to spectators.”

Aarti Parwaney, Director, Pyramid Technologies, recalled that following the finishing touches made to the statue, the actual installation process of the projectors on-site was accomplished in a record time of 10 days. This included the construction of temperature and humidity-controlled equipment housing, air-conditioning and electrical works.

All 51 Crimson WU25 projectors used for the 30-minute light and sound show are housed in a customized IP65 weather-proof, temperature-stabilized enclosure at 20°C to 25°C to suit the enormity of the application and fitted in a projection room located about 600 meters away from the monument. Specialized mirror mechanisms enable the Crimson projectors to display colorful visuals on the statue from such a far throw distance.

“The enclosure was built at a height of 51 meters from the river bed and the finished floor level for viewing was to be at 58 meters. The projection was to be done from seven meters below access levels and we didn’t have direct access to carry the equipment to the projection room enclosure below since that area was still under construction. Therefore, to move even a single projector or rack, we had to deploy telescopic cranes which made the transportation of equipment extremely challenging,” said Aarti.

Despite the challenges, the team from Pyramid Technologies and HB-Laser were able to work closely together to overcome the various issues, ensuring that everything was completed in time for the official inauguration by Prime Minister Modi.

Aarti added, “All the hard work was worth it, as the show created a larger than life experience owing to the enormous size of the statue which provides the most unique canvas to the projection mapping installation. There are several factors that made this project different, including a long projection distance of over 600 meters, the distinctive bronze metallic projection surface with a very low gain, and the use of a specialized mirror assembly to produce the desired projection results.”

The light and sound show has received rave reviews since its debut on October 31. Every evening, it attracts thousands of spectators eager to be enthralled by dynamic visuals and colorful lasers as the life and times of Sardar Patel is retold on the statue’s façade. The show is now among the major attractions at the Statue of Unity.

“When it comes to challenging projects in India, Christie has been the preferred choice for projection solutions due to its excellent track record in terms of performance, reliability and service support. This project is no exception. The Crimson projectors have lived up to Christie’s standards and we are very pleased with the decision to use Christie Crimsons for this install. The light and sound show at the Statue of Unity has received immense appreciation globally and we are extremely happy to be associated with this project,” said Ajay.

Sean James, Executive Vice President, Enterprise & Entertainment, Christie, commented, “We are absolutely delighted that the Christie Crimson Series has been chosen to illuminate the Statue of Unity, which is a symbol of India’s unity and integrity and a fitting tribute to one of India’s most respected statesmen in modern times. Over the years, Christie has built a solid reputation for delivering numerous large-scale projection mapping projects in India. We currently own 90 per cent of the market share for permanent projection mapping installs in India, and 80 per cent of the market share in India in terms of the deployment of projectors above 10,000 lumens.”

Designed with both fixed and live events stagers in mind, the Christie Crimson Series is built-tough and is easy to ship, handle and install thanks to its compact form factor, quiet operation and 360-degree orientation. With its long-lasting brightness (20,000 hours), rock-solid reliability, TruLife Electronics, and BoldColor Technology​, the Crimson Series combines the best in solid-state illumination with the brightness and color that’s ideal for use in large venues, live events and high-usage environments.