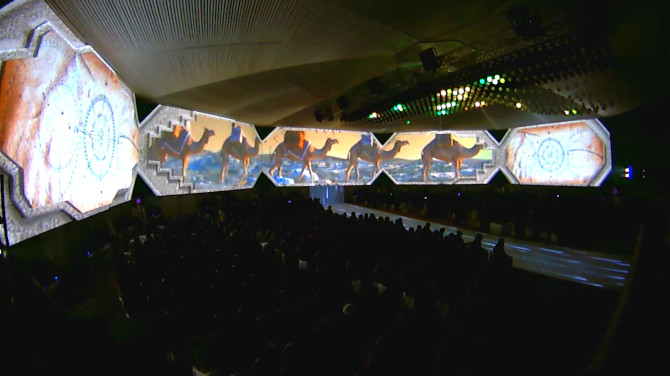 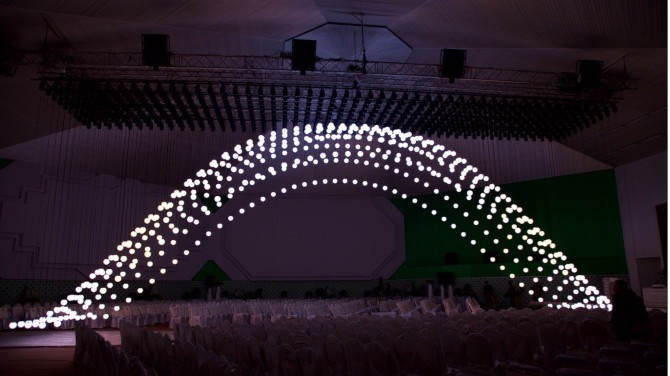 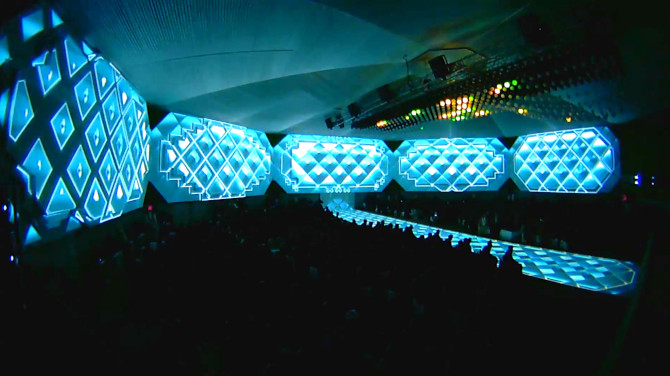 "It's so great when the most complex and spectacular ​​part of a project turns out to be one of the simplest and fastest to implement. That's why we love Christie technology and choose it over other alternatives." Alex Samokhin, Tribar Imagineering.

The settlement of Ymamnazar is situated in Turkmenistan's Lebap Province on the border with Afghanistan. It's a place rarely visited by the casual tourist – the nearest airport and regional centre, Turkmenabat, is 289 kilometres away, and the Turkmen capital Ashgabat is an 875-kilometre drive away on secondary roads. All around are never-ending desert sands. But it was this small town that served as the venue for what can rightfully be called one of the most spectacular events to have taken place, not only within the region, but worldwide; a fact confirmed by recognition from the professional community and recent wins in the Live Event category at the AV Magazine Awards and InAVation Awards.

The event in question was the opening ceremony for the first section of a railway between Turkmenistan and Afghanistan, a part of the crucial transport artery that is the future Asian International Rail Corridor. The grand opening, which took place right on the border between the two countries, was attended by both heads of state. The most breathtaking part of the show was an ambitious video screening delivered by Tribar Imagineering using 16 powerful Christie Boxer 4K30 projectors.

"Clients who approach us to put on events like these normally have quite a succinct brief," says Alex Samokhin, Managing Director of Tribar Imagineering. As such, Alex and his team enjoyed a great deal of freedom in developing the project. "This made it easier and more complicated at the same time: we developed the concept, design and screenplay ourselves, and then we brought it to life, too. It seemed like there were no limits. But in practice, having no point of reference whatsoever can make the work far more difficult than it is when everything is set out for you."

For any event, but especially one taking place out in the desert, far from civilisation, there are a great many details to keep in mind: the specifics of the location, logistics, the availability of local construction skills, and the choice of materials. "In the desert, even smaller distances can take a lot of time to cover. The condition of the roads meant that it would take at least two weeks to travel to the event venue by land. Between Moscow and Ashgabat it's just a plane journey, but beyond that it's an adventure. We also had a carriage full of equipment, which we attached to our mini-train consisting of a restaurant car, a generator, a sleeping car, and a platform loaded with a minibus to transport us from the mini-train to the venue and back. This gave us a fully self-sufficient system," Alex recounts. "It's not just about being able to paint a wonderful picture, you also have to be able to build it within a quite limited timeframe. Naturally, in a situation like that it's very important to have equipment you can rely on."

Tribar Imagineering worked on the concept for the ceremony for almost nine months, and then required a further two to bring this unique project to life.

A tent in the desert

At the event venue, at the point where the two countries' railways meet, the team erected a special tent in the shape of an eight-pointed star designed to hold a thousand guests. The interior was furnished with large decorations in the form of gels – traditional Turkmen carpet ornaments. During the show, these gels would provide the canvas for projection mapping. In order to visually extend the space and create an 'immersion effect', an additional projection was created for the floor. On the ceiling, a cinematic installation consisting of 500 moving luminous spheres was created.

Ten Boxer 4K30 projectors delivered the show onto the large wall decorations, and another six onto the floor. It was the scale of these decorations that called for such a large number of projectors, in order to prevent the appearance of shadows where they met. To project onto the wall (which was 15 metres high, with each canvas five metres wide), the team used 1.63–2.17 HB Zoom lenses, together with 2.71–3.89 HB Zoom lenses for the 144-square metre floor.

"Guests at the event, who had contended with a long journey in order to be present, were met with a real surprise. They hadn't expected that such a modern show could be created at such a remote location. We pulled out all the stops to fill it with breathtaking ideas and technology," Alex Samokhin says.

For the launch of the first section of the future Asian International Rail Corridor, linking Turkmenistan, Afghanistan and Tajikistan, Alex Samokhin's team created an impressive, yet simple and easy-to-follow story telling of the region's future once this major piece of infrastructure is opened.

"In itself, the subject of railway transportation is, to be honest, a little on the dry side, which made it quite a challenge to come up with vibrant images and metaphors to present it. There weren't a lot of existing examples available for inspiration either. We needed to hammer out each approach several times, test it, and decide whether it worked for viewing," Alex explains. "The story consisted of three parts with different themes: we began by showing Turkmenistan's achievements in developing its transport sector since independence, underlining that these developments were all aimed at restoring the Great Silk Road and developing the country's transit potential. In the second part we explained the importance of this route to all of the countries involved in its development. The third part focused on what has already been built. This includes 85 kilometres of track, two bridges, and two stations – important components of the project's first phase."

Tribar's portfolio already included projects for the Turkmen government. "We had already achieved high standards in the past, so we tried to outdo ourselves with each part of the show," Alex recalls. "And our choice of equipment played an important role in this. Thanks to our partners Big Screen Show, we were able to use powerful 30,000-lumen Boxer projectors for the first time – and it has to be said, the results were extremely vibrant and richly coloured. We were really able to achieve that wow factor.

It's no exaggeration to say that Christie Boxer 4K30 3DLP projectors are the ideal rental solution. Aside from their extreme brightness and 4K resolution, they boast an exceptionally wide range of functions which are perfect specifically in rental situations, where you have a combination of complex installation, short deadlines, and an increased need for in-show reliability. It was the thought put into the Boxer's design that appealed to us the most," Alex confirms.

Five features of the Christie Boxer 4K30 that helped to make the desert project a glowing success: