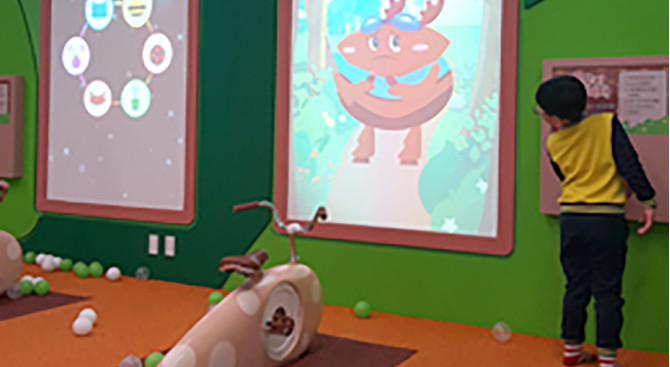 Since its opening in June 2016, Yecheon Insect Museum has become a highly popular destination for entomophiles, or insect lovers, across South Korea. Located in Yecheon County in the province of North Gyeongsang, the museum is known for its wide collection of insect specimens from all over the world. Interest in visiting the museum has soared since the County successfully hosted the World Insect Expo Yecheon in the same year.

Eager to elevate the visitor experience to a new level, the management of Yecheon Insect Museum decided to introduce visual technologies to the various exhibition zones, making them more interesting and educational for guests both young and old. It turned to Ten Square Co., a major systems integrator for museums and experience centers for guidance, and Christie’s longstanding Korean partner Shinsung was brought in to recommend a projection system that would fit the museum’s requirements. Shinsung has worked closely with Ten Square Co. on various projects using Christie solutions.

“The management of Yecheon Insect Museum wanted a reliable and long-life laser projection system that could operate 24 hours a day, seven days a week (24/7) without the downtime associated with conventional illumination sources,” said Dong-Woo Lee, Director, Shinsung. “They knew about theChristie GS Series and its advantages, such as superior levels of brightness, image quality and color reproduction, and how various GS Series models have been successfully deployed in museums, theme parks and attractions around the world.”

He added, “The museum’s management has done considerable research on several projector makes, and ultimately decided that the Christie GS Series is the most suitable choice after taking into account branding, reliability, color performance and level of technical support. They are confident that the GS Series will satisfy its needs for many years to come.”

A total of 14 Christie DWU700-GS and DWU630-GS 1DLP® laser projectors are deployed for the Wonder Hill attraction on the first floor of the museum, which serves as an interactive storytelling gym for children. It recounts the story of a child who eventually becomes the hero to save Wonder Hill from destruction by defeating a space bacterium to reclaim peace for his homeland.

“Even though we have been involved in numerous projects for museums and theme parks across the country, this is one of the first installs that include a wide array of interactive functions that’s capable of elevating the fun and excitement quotient to a new level. It took us about a month to complete the entire setup, including testing and commissioning, and the end results have been astounding,” said Lee.

Vibrant visuals are displayed on numerous large screens around the attraction, where children can engage in different activities as they partake in the storytelling process. There are also interactive elements that enhance playability and stimulate learning among the young visitors. For instance, images of blooming flowers are projected on the floor and when visitors wearing RFID tags step on the stones in the “garden”, they can learn about the metamorphosis of butterflies through animation displays on the huge screen in front of them.

In another zone, children can ride slug-shaped bicycles and pit their skills against one another as they “race” to the finish line while observing their progress on screens showing highly-realistic images. When it’s time to step up as the hero, visitors can congregate in a ball pool flanked by a large five-meter screen where they use gesture movements to control virtual objects onscreen, and engage in a climactic final battle to defeat the space bacterium boss and save Wonder Hill from ruin.

“The management of Yecheon Insect Museum was highly impressed with the colorful and razor-sharp visuals when we first unveiled the completed attraction to them, and they concurred that the end results were better than what they had expected,” Lee recounted. “The GS Series demonstrated excellent color performance and delivered the animation effects in spades. Reliability is top notch and its laser illumination source eliminated the need for lamp and filter replacements, resulting in greater cost savings for the end user.”

Lee acknowledged that laser projection has become a game-changer given its long-life illumination, easy maintenance and a lower cost of ownership in the long run. “Museums and other high-usage environments that require reliable systems for 24/7 operation are increasingly turning to solid state illumination with interactive capabilities to enhance the experience of visitors and increase the appeal of their attractions. I foresee the market for children’s theme parks growing in South Korea and we look forward to promoting the use of Christie laser projectors, using this installation as our reference site.”

Commenting on the installation, Paul Lee, Sales Manager, Enterprise, Christie Korea, said, “It’s very heartening to see the museum’s different audiovisual attractions being brought to life through the innovative use of our GS Series laser projectors, which have resulted in higher attendance and generated greater interest in the study of insects. Our dependable laser-illuminated projection solutions are ready to help customers simplify the technical process so that they can focus on taking their creative ideas to productive fruition.”

Delivering up to 6,750 ISO lumens and equipped with 4,000,000:1 Christie RealBlack contrast ratio, the Christie 630-GS laser projectors – available in HD or WUXGA resolution – eliminate the need for lamp and filter replacements, providing 20,000 hours of low-cost operation. In addition, its 24/7 capability, small footprint, low-weight, quiet operation and a full suite of lenses make the 630-GS ideal for museums, theme parks and attractions, rental markets and other high-usage venues.