The National Carillon, a 50-meter high musical instrument, is situated in Australia’s national capital, Canberra. It sits on Aspen Island in Lake Burley Griffin, connected to the northern foreshore by a pedestrian bridge. It was a gift from the British Government to the people of Australia to celebrate the 50th anniversary of the national capital and was officially opened by Queen Elizabeth II in 1970.

Fitted with 57 bronze bells, the National Carillon is played on a regular basis during the year by both local and visiting carillonists. It is often used to celebrate national days and performances are staged in conjunction with other events such as Australia Day. The iconic landmark’s unique tower-like structure makes it an ideal venue for outdoor projections at night. It was for this reason that Christie’s valued Australian partner, The Electric Canvas (TEC) – well known for its experience and expertise in large scale events – was approached by the National Capital Authority (NCA) to develop architectural projections on the Carillon’s façade in support of National Reconciliation Week 2020.

Each year in Australia from 27 May to 3 June, National Reconciliation Week celebrates and builds on the respectful relationships shared by Aboriginal and Torres Strait Islander peoples and other Australians. The eight-day celebration is an ideal opportunity for all Australians to learn about their shared histories, cultures and achievements, and to explore how everyone can contribute to achieving Reconciliation in their country. 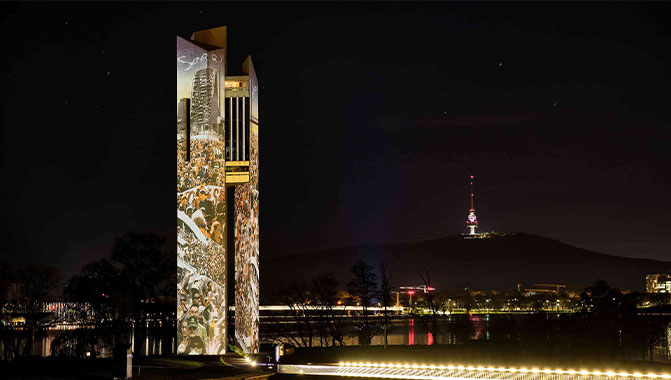 '2000 Walks for Reconciliation – In this Together' with montage of various photographs by
Glenn Campbell/Newspix, News Ltd/Newspix, Brian Condron/Newspix,
Richard Cisar Wright/Newspix. Narrative created by Reconciliation Australia

With the exception of the Carillon projections, National Reconciliation Week 2020 was celebrated entirely online in light of the COVID-19 pandemic. The theme for this year was ‘In This Together’, which highlighted the importance of coming together to support each other in a shared experience, whether in a crisis or in reconciliation.

TEC surveyed the Carillon and created a wireframe model in order to plan a projection layout. The structure was to be activated over eight consecutive nights during National Reconciliation Week, with each night dedicated to a different Indigenous organization or in observation of key dates. Over little more than two weeks, TEC’s creative department engaged with eight separate organizations, as well as Indigenous artists, in order to develop their pieces for projection. Their experience working with Indigenous and culturally sensitive content was a valuable asset for the project.

“Culturally sensitive work with a lot of stakeholders involved usually takes months,” says Peter Milne, managing director, TEC, “but we decided to take on the challenge. The first step was briefing the participants and explaining how a projection on this type of structure works; it’s not just putting someone’s painting up on a flat wall. The Carillon is 50 meters high and made of three triangular columns that are six meters wide on each facet.”

The design process was also challenged by the need to consider viewing angles and distances that varied from 100 to over 850 meters, around the shores of Lake Burley Griffin. Key messaging had to consider all the possible vantage points, and TEC had to educate the contributing artists and stakeholders on what the opportunities and limitations were with regard to the content.

As the COVID-19 situation improved in Australia, the NCA made the decision to reopen Aspen Island to limited numbers of people during the event, so TEC had to allow for very close proximity viewing. “This created an opportunity to present something more intimate, with a lot of detail, that could be seen close-up,” relates Milne. “The tower locations were chosen to provide a clean shot at an internal facet. This allowed us to project text and explanatory items on an internal facet that you couldn’t see from anywhere else.” 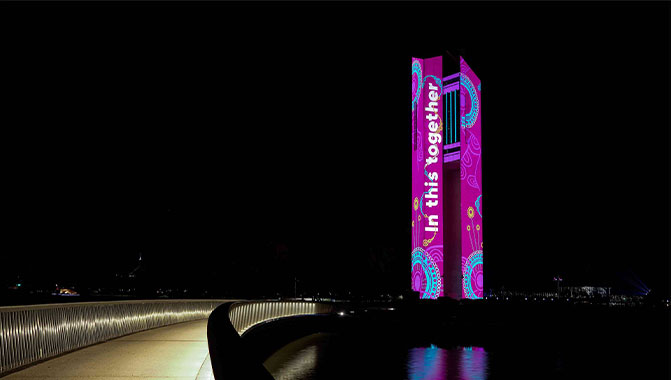 ‘Reconciliation, a continuing journey of growth and togetherness’, based on artwork by Nikita
Ridgeway, with narrative created by Reconciliation Australia

With all preparatory work completed, the next important step was the selection of appropriate projection systems that could deliver the optimal visuals at all vantage points. TEC chose to deploy 12 Christie® Crimson 3DLP® laser projectors from its fleet to deliver the bright, impactful projections onto the Carillon.

“We decided that the Christie Crimson projectors were the most suitable for this task. Not only are they engineered to withstand the rigors of demanding, high-usage applications with an IP5X-sealed, solid-state laser light source, they are also energy efficient and deliver a superior color gamut. These make the Crimson projectors the perfect tool to highlight the brilliant hues of the content and the important messaging that it conveyed,” says Milne.

TEC set up four projection towers, with each of them housing three 25,000 lumen Christie Crimson WU25 laser projectors running in portrait mode. Media was handled by TEC’s Modulo Kinetic media server system with full hot back up. After an additional night of projector alignment, TEC conducted a content review for stakeholders, which also provided an opportunity for drone footage to be captured by the NCA.

With no shelter on Aspen Island, it would be an unpleasant place to work in cold and windy conditions. Fortunately, TEC was able to set up their site office in the comfort of the viewing gallery atop the Carillon and, from there, the operator could monitor the entire 360-degree projection from cameras mounted in each of the projection towers.

Sending a strong message across the country

On each night, the Carillon showcased a different image overlayed by important messages about the nation’s journey to Reconciliation. The first illustration that kicked off this year’s event was titled ‘Reconciliation, a continuing journey of growth and togetherness’ by Nikita Ridgeway, with narrative created by Reconciliation Australia. 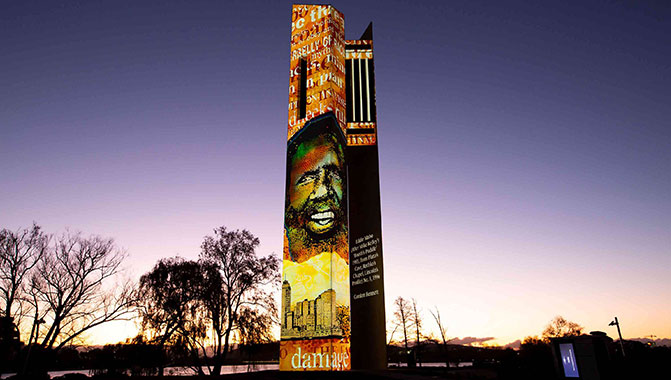 ‘Mabo Day’ based on artwork by Gordon Bennett, with permission from the National Portrait
Gallery and the Estate of Gordon Bennett and Gail Mabo

The artwork’s vibrant colors and design elements represented Australians together on a national journey of Reconciliation, while paying homage to the past and recognizing the present. Images projected on the national landmark on the other nights, created by various talented Australian artists, also delivered strong messages of bringing people together from across the country for conversation and to truly understand what Reconciliation means. The bright and beautiful projections resonated deeply with many Australians throughout the event.

Expressing his team’s satisfaction with the quality of the projections, Milne comments, “The Christie Crimson projectors have quickly become our platform of choice. Not only does their form-factor and manageable weight make them easy to work with and deploy in unusual configurations, their impressive color-space renders a greatly expanded pallet, opening the door to new creative opportunities.”

Likewise, the NCA and all stakeholders were also extremely happy and impressed with the brightness and clarity of the projections. The amazing projections onto the National Carillon was a great exercise for the team at TEC, who were able to break the bonds of their COVID-19-induced confinement and have the chance to do what they love best!

Congratulating the TEC team on the completion of this project, Michael Bosworth, executive vice president, Enterprise, Christie, says, “Despite the restrictions brought about by COVID-19, Peter and his team have once again risen to the occasion and delivered spectacular visuals at the National Carillon that all Australians can be proud of. We are also delighted that our Crimson Series projectors provided brilliant and intensely colorful images that encouraged all Australians to reflect upon the part they play – whether big or small – on our journey towards Reconciliation.”