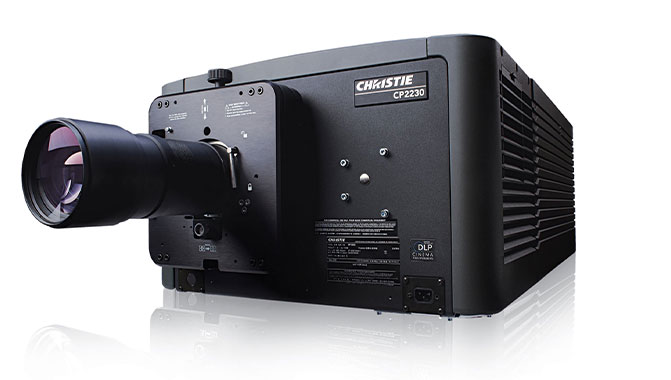 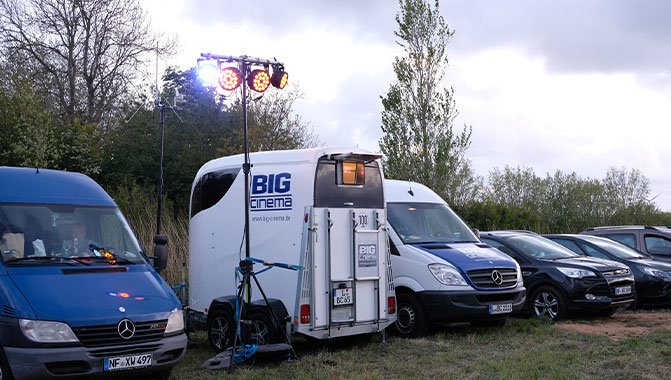 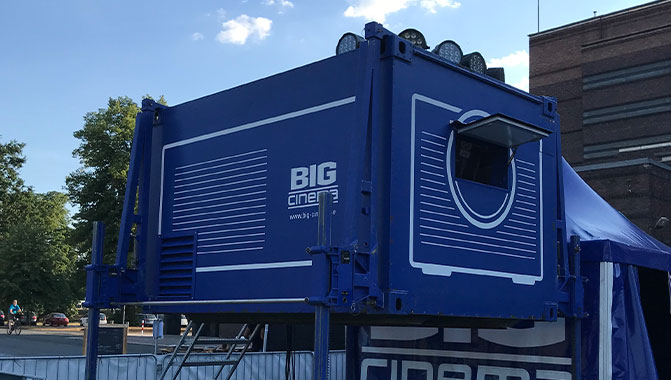 Summertime is open-air time in Germany. In early summer, Dresden was home to one of the largest drive-in cinemas in Germany. With a screen size of 500 square meters, it truly lived up to its name of ‘Big Screen’. Mobile cinema cabins equipped with Christie CP2230 projectors provided the perfect outdoor cinematic experiences not only in Dresden, but also at many other open-air events throughout Germany.

Watching movies from the comfort of your own car was one of the trends of this admittedly special cinema summer. At an 80,000 square meter landscape area close to the city center, Dresden hosted one of the most remarkable drive-in cinemas, which included the installation of the largest pop-up screen in Germany and provided space for around 650 cars and over 1,000 visitors.

Leipzig-based BIG cinema GmbH was in charge of planning and installing the technology for the event. Specialists in cinema and media events, both indoors and outdoors, BIG cinema had previously implemented many different open-air events in Dresden. “To use a projection screen with a picture width of about 34m is a challenge if you want to achieve the mandatory brightness of the DCI specification,” says managing director Johannes Bernstein, “But one that we were happy to face.”

Bernstein and his team opted for a dual projection setup with two Christie Solaria CP2230 projectors, each with a light output of around 30,000 lumens. The installation in Dresden is the largest, yet most compact, mobile dual projection system implemented by BIG Cinema to date. “CP2230 projectors are ideal for this setting as they not only guarantee a sufficient light output but are also very robust and reliable,” Bernstein explains.

For its open-air installations, BIG cinema relies on a concept based on an aluminum cabin such as those used in military technology. The enormously compact and light cabin, measuring 2 x 3 meters, is used in many of the projects implemented by the company and is available in various configurations, providing a mobile installation with almost all of the benefits of a fixed install.

When empty, the cabin weighs just 600 kilograms or around 1,500 kilograms with equipment. The substructure consists of a Layher scaffolding system. Bernstein notes “Thanks to its height of 2 meters, the cabin is very stable. Its two large side windows also ensure that there is sufficient flexibility when in operation.” The cabins are fully air-conditioned; a recirculation system guarantees smooth operation of the projection technology in all weather conditions. The aluminum construction also provides for a longer service life of the cabins.

Bet on the right horse

The technology is transported on specially made trailers equipped with a lifting device. “The trailers are ideal for medium or long distances because they have a special suspension which is actually intended to protect the horses' joints as in horse trailers. Of course, it also ideally absorbs potholes or other shocks and thus protects the equipment,” comments Bernstein. On the trailer, the cabin is simply locked via a twist lock and can be set up and made ready for operation in approximately one hour.

The extremely flexible and quickly deployable trailer solution is especially useful at times when deadlines and conditions on site can change quickly. Only recently, for example, BIG cinema set up open-air cinemas with marked spacing areas for around 200 spectators at various locations in parks in Berlin. Now, the trailers are once again on their way across Germany to their next location.

BIG cinema‘s mobile projection units all rely on Christie projection technology. Bernstein comments “On the one hand, this allows us to gain in-depth knowledge of the projectors, on the other hand it also allows us to handle optics and other spare parts flexibly. The result is a completely standardized and modular system.” In addition, usability is an important point: the use of Christie projection technology makes it easier to find errors and to control the operational reliability, Bernstein confirms.

At the event in Dresden and many other open-air projects throughout Germany, Christie projectors in the mobile aluminum cabin have once again proven their worth. “As expected, the technology worked smoothly. It was also nice to see that despite the current adverse circumstances, the performances were often played in front of a sold-out house,” Bernstein concludes.