Christie projectors are the first pick

The National Football League Draft is hugely anticipated and one of the most watched events on U.S. television. Regularly attracting audiences that compare with other high-profile occasions such as the Hollywood Oscars, cities across the U.S. compete to host the three-day event each year. The 2021 NFL Draft was held in Cleveland, Ohio, home of the Cleveland Browns, and achieved the second-highest television audience ever. A special ‘theater’ was constructed for the ceremony and Terminal Tower, an iconic high-rise building in the city, was used as a canvas onto which the 32 NFL teams' respective colors were projected during their time on the Draft clock. 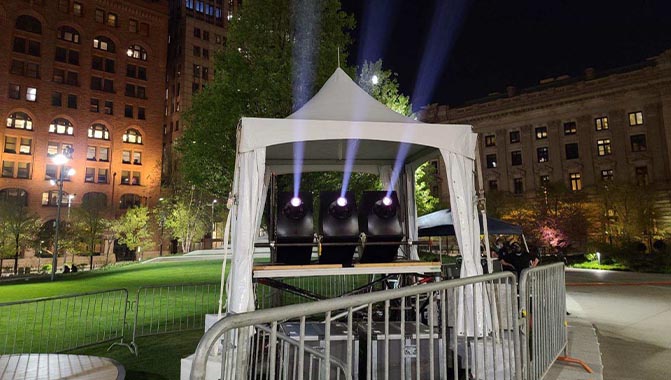 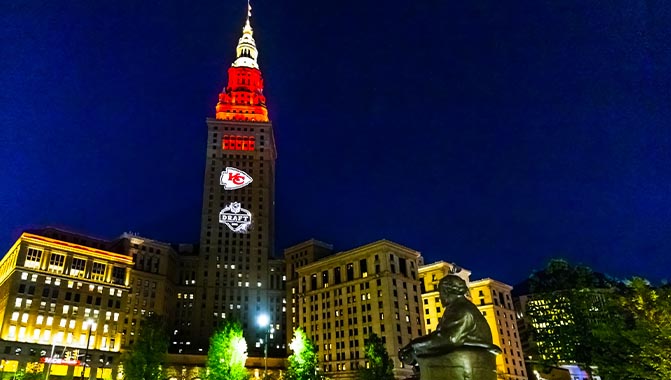 When it was built back in the 1920s, Terminal Tower was the second tallest building in the world. The task of turning this landmark building into a spectacular backdrop to the Draft ceremony fell to Vincent Lighting Systems (VLS), a specialist in entertainment and architectural lighting projects. Working for the Greater Cleveland Sports Commission (GCSC) and with NFL Creative Services, the K&D Group who own the building, and a technical team which included High Output of Boston, VLS designed a creative array of three Christie projectors to light up the building with the team’s colors and logos.

The original concept pitched by the creative team to the NFL, involved making the colors of the building match the "team on the clock". "The NFL took the concept a step further as they wanted to highlight which team was on the clock, but also include the NFL Draft logo and branding," comments Mike Mulhall, Vice President of Business Development at the GCSC. "The idea was for the projection display to seamlessly follow the draft order and change as the commissioner announced the next team on the clock. In any event it worked perfectly."

The show required a two-day build and dress rehearsal. The biggest challenge for the team according to Tom Siko, President of VLS was the weather: "We loaded in on a sunny 70 degree plus day - which is unseasonably warm for Cleveland in April – and our prep and rehearsal nights were beautiful without a cloud in the sky. Our first night of the draft was after a day of rain (officially measured at over 2") and a temperature right at freezing. This also blanketed the city in a layer of fog. As I arrived at the jobsite around 4pm that afternoon, the entire top of the building was not visible due to the fog. As the night went on the fog lifted and by the middle of the 1st round, the projection was visible on the side of the building."

This also threw up another challenge linked with the weather: cooling. "To protect the projectors from rain, we had a 10x10 tent constructed at the site," adds Tom. "Our initial concern and question was could we operate the projectors with the sides of the tent closed if we ended up with a constant drizzle? Fortunately, after some testing we discovered that with three of the four sides closed, the projectors had no thermal or temperature issues operating. This was a great help to keeping the show running through a rocky first night due to weather."

An additional positive outcome for VLS has been a new and growing business relationship with Nationwide Video. "I’m glad we’ve been a help to VLS as they transition from being a lighting only company to a full production supplier," says Bret Tracey, President, Nationwide Video. "Our role has been to support with inventory, as well as on this project, to compare the Christie D4K40-RGB pure laser units with other projectors. After discussing the challenges of the project with VLS we agreed that the Christie D4K40 product was the right projector choice."

The Christie projectors were installed at street level on a 5’ stage deck located in Public Square. Enclosed in a tented area for protection and security, VLS rigged the projectors at 90° to take advantage of the unit’s portrait orientation feature and help alignment with the building. The correct angle was significant, and a small pipe structure was created to support and maintain the rigging of the projectors. An additional small control area was created alongside the projector tent to house the media server and other control elements.

As Tom Siko notes, "when you think of projectors in use it’s in a traditional environment, projecting at a shorter throw distance on a screen or traditional surface. This project was unique as we were taking three 4K projectors and putting them in the middle of a public park. And projecting onto the textured façade of a building, not a screen."

The result was stunning and helped the local audience and viewers from around the world appreciate the Draft and the beauty of the City of Cleveland. Throughout the course of the broadcast, several networks (including ESPN/ABC Sports) used aerial views as cut-away and B-Roll. Many locals and draft attendees took positions in public square to watch and marveled at the changes of the building. Huge applause erupted when the Cleveland Browns were on the clock and boos when Cleveland’s rival took their time.