Europalco designed a matrix of six Christie Boxer projectors and Pandoras Box for the bank’s get-together with its employees. 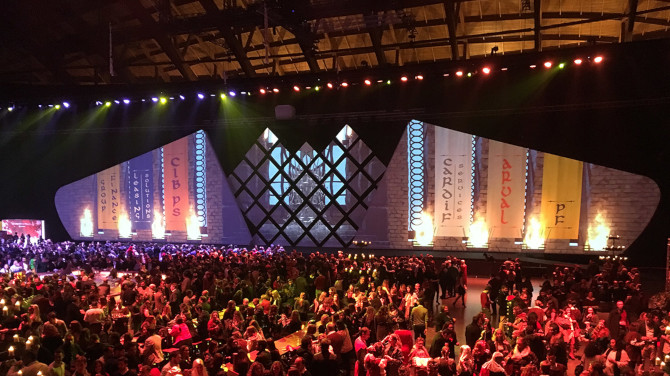 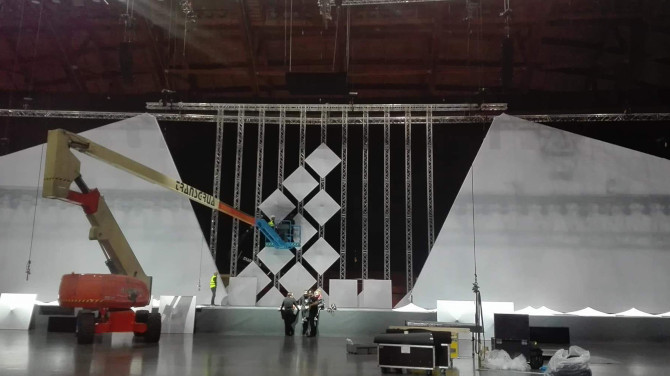 Drogon, Viserion and Rhaegal, the dragons from Game of Thrones, are three absolutely central characters in the series. They might not give interviews, but whenever they make an appearance on the screen it is always one of the high points of the episode. The Portuguese branch of BNP Paribas, one of Europe’s leading banks, took the three dragons as the theme for its annual get-together with its employees, an event hosting 3800 people at Altice Arena in Lisbon, Portugal’s largest indoor venue.

To organise the event, the bank commissioned Europalco, Portugal’s leading company with the best solutions for events and shows, who, in turn, contacted Grandpa’s Lab, a studio specialized in stage design and the creation of contents for mapping projections. This winning tandem is behind some of Portugal’s most memorable audiovisual events. And this one for BNP was no exception.

“BNP Paribas asked us to come up with a spectacular show for its employees at its annual meeting”, recalled Pedro de Castro, project manager at Grandpa’s Lab. “They were looking for something really impressive, a setting that would cause a big impact and a highly dynamic emotional curve. As the event was inspired by Game of Thrones, we created a story to lead spectators through this unique visual universe.”

The meeting gave Europalco and Grandpa’s Lab the perfect chance to show off their technological innovations and artistic digital creativity. The team at Europalco worked tirelessly to meet the challenge of putting together the whole show in just one week. And there is no one quite like this Sintra-based rental company to successfully pull off such an ambitious project, which not only called for experience and know-how in this kind of show, but also the equipment and the most powerful content management software on the market.

Europalco designed a spectacular screen on a truss covered with white lycra, measuring 64 metres wide by 12 metres high, imitating the anatomy of a dragon. The sides of the gigantic tapestry were the wings and the centre, the body and head. A truly impressive set-up, the likes of which were never seen before in a live show in Portugal.

To power the projection, Europalco designed a matrix of six Christie® Boxer 4K30 projectors with 3DLP® technology, 30,000 lumens centre and 4K resolution (4096 x 2160), which were aligned in three groups of two. One pair was used for the left wing, another for the right wing and the third for the centre of the screen. They were located at a height of 12 metres and at a throw distance of 50 metres.

The projectors were used to screen motion graphic contents based on Game of Thrones created by Grandpa’s Lab in conjunction with its partner Expanding Roots. Besides the audiovisual projection, the show also included fire-throwers, actors and acrobats to round off the story at certain moments.

Using six identical Boxer projectors made all the difference and played a core role in the success of the event, guaranteeing the high levels of brightness that ensured a real wow-factor. One of the BNP Paribas employees at the event had this to say: “I never believed that I would be so impressed by a projection. The screen was so big and spectacular that it almost overwhelmed you. The 3D effect of the dragons convinced you that the dragons came out of the screen and flew over our heads. The quality and sharpness of the image were really incredible. And the light coming out of the screen was equally awe-inspiring.”

The joint output of the six Boxers produced no less than a whopping 180,000 lumens. Hugely popular in the rental sector for events and shows ever since they were first launched in 2015, the multi-prizewinning Boxer range of projectors are now the benchmark for large-format projections due to their high performance, compact and rugged design, and light-weight –weighing in at just 68 kilos – and 360-degree omnidirectional installation capabilities, which means they can be used in any position.

“We are delighted with the performance of the Boxer 4K30 in the event”, said Pedro Magalhães, CEO of Europalco. “It is so powerful that at certain moments we had to turn off some of the projectors because we actually had too much light. And there are a lot of other factors too that make it so interesting, like the multi-lamp system, the low power consumption, how easy it is to adjust them, and the built-in warping and blending functions.” In addition, the Boxer also comes with built-in Christie TruLife™ to ensure optimum bit depth and high frequency images.

Two multi-prizewinning Christie Pandoras Box® servers, celebrated for their power to create high-impact large-scale multimedia experiences, were used to manage all the content powered by the projectors. “Pandoras Box is a really easy system to use and, more importantly, it never lets you down”, claimed Magalhães, adding that “the operation and programming of the whole show was so simple because of Widget Designer.”

Christie Pandoras Box Widget Designer​ is an intuitive software tool used to create customized control applications for shows, allowing all sources and screens to be easily connected with one single powerful interface. Widget Designer translates the various different protocols so that they can interact with each other, either automatically or on demand, with single or multiple controls, like the follow-up system, industrial sensors, PCs, tablets and even game controllers.

Pedro de Castro, from Grandpa’s Lab, had only good things to say about Pandoras Box: “Its mapping tools are excellent. I also like the fact that it allows you to create complex timelines without the need for third-party software, which is a big help when organising any event, whether the script is simple or highly complex.”

One of the biggest challenges was matching the images precisely on the irregular surface on which they were screened. Remember that the central part of the screen, which represented the dragon’s torso, was full of uneven scales on which we had to project. “Adjusting the images to the scales was a real nightmare”, recalled Magalhães, “but in the end we were able to resolve the problem thanks to the Pandoras Box warp plug-in. The images were projected to perfection, at all times filling the different parts of the screen and maintaining the lighting strictly inside its edges,” he concluded.