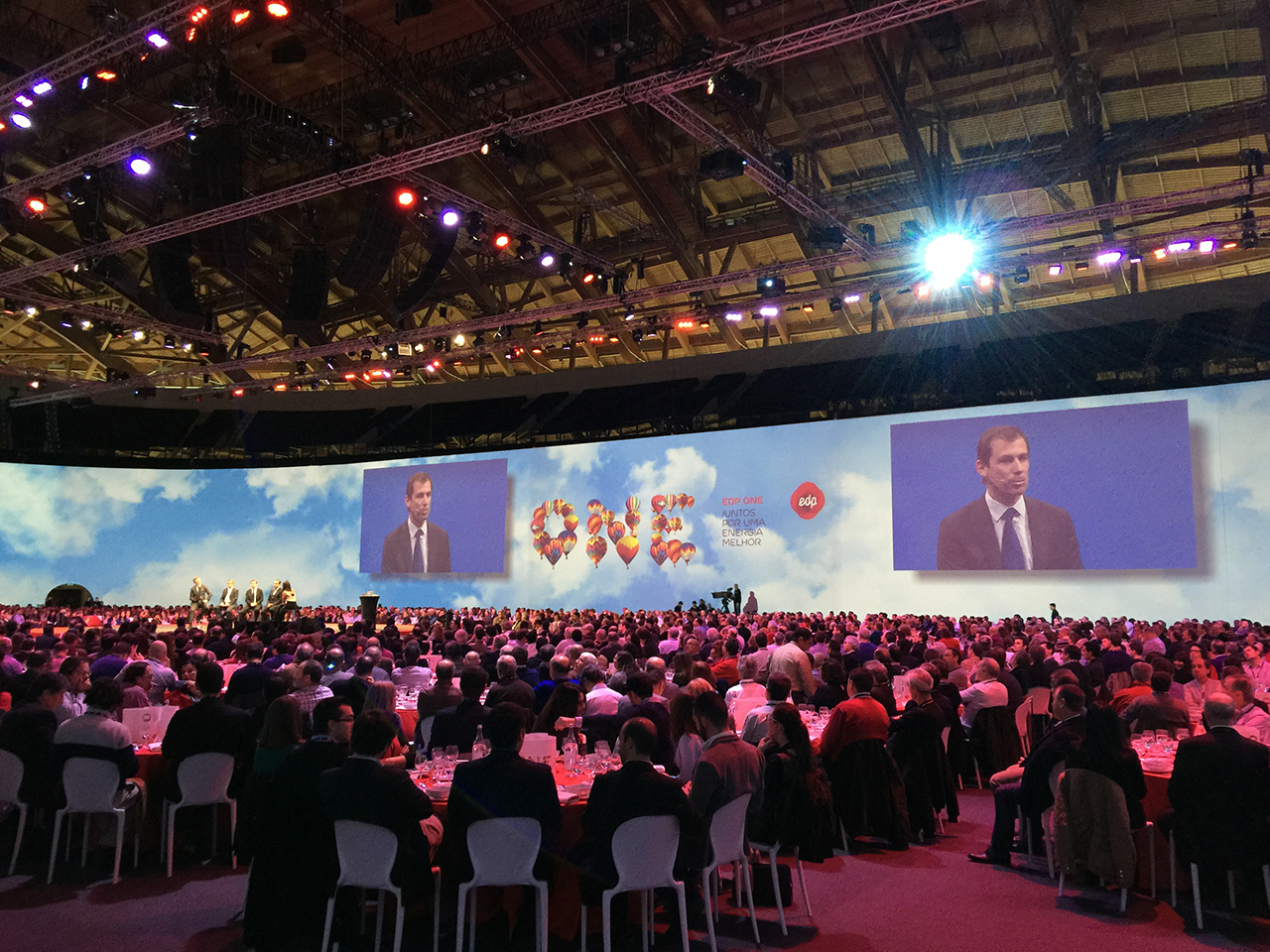 Organised for the annual meeting in Lisbon of EDP (Energías de Portugal), one of the largest electrical groups in Europe and the largest in Portugal and conceived by the Desafio Global Ativism agency, the scale of this ground-breaking presentation took 8 months to prepare. The event has just been awarded First Prize in the B2I (Business to Internal) / Convention category at the European Best Events Awards2015 (EuBea).

The annual meeting was held at the MEO Arena in Lisbon, Portugal's biggest pavilion which holds up to 20,000 people. Where Europalco, veterans of the event-staging community and long-time partners of pro-AV technology manufacturer Christie, created a circular screen measuring 300 metres long by 10 wide to surround a circular stage hosting more than 66 speakers over the three days of the meeting and an audience of more than 7000 EDP workers in a wall of sound & vision.

This was the creative backdrop and singular presentation space against which the company presented its vision for the future under the banner "EDP ONE: together for better energy". This was not the first time that Desafio Global Ativism and Europalco have worked together to support EDP's annual meetings. However, this time, the sheer size and volume of the equipment and human resources used were on another scale, with 450 professionals divided into 15 teams put together especially for the occasion.

"Right from the word go Europalco was on board with us in the design and development of the project", explained Gonçalo Oliveira, Events Manager at Desafio Global Ativism. "Given its technical expertise, we look on it more as a partner than a mere provider, and we repeatedly challenge them with new creative and technical concepts that have not been realised before and together we always find innovative and exciting solutions. Their input is critical to the introduction and implementation of new technologies help to realise our creativity. To power the 3000 square metres projection area, Europalco used 14 Christie Roadster HD20K-J 3DLP technology projectors, which provide 20,000 lumens and HD resolution (1920 x 1080) and are especially robust with Xenon lighting, offering the highest levels of brightness and colour reproduction. Making them ideal for the rental and staging sector and presenting a company's brand correctly.

The projectors, equipped with 1.4-1.8 lenses, were suspended from the centre of a grid at a throw distance of 30 metres. Each Roadster HD20K-J produced an image of 18 x 10, and fibre optic cables were used to relay the video signals to the projectors, while four Catalyst Media Server Pro v5 servers were used to control the images. The projection had a total resolution of 25,000 x 1080 and the aspect ratio was 25:1.

The use of blending and warping was critical in making sure that the images fitted exactly on the curved surface on which they were projected. To this end, Europalco used the projectors' built-in Christie Twist software, which controls the edge blending and projects images on curved surfaces without visible separations. It also takes care of the warping so that the images can adapt to almost any size or shape and with a highly precise pixel to pixel alignment.

"The projectors guarantee excellent throw distance, flexibility in lens offset and alignment", said Pedro Magalhães, Europalco's general director. "We only had 48 hours to set up for the event, and besides being able to count on a highly skilled technical team, the projectors themselves were also easy to work with and set up", he added.

The contents basically consisted in animated backgrounds created by the Hello Movement studios and Olga Studio, corporate videos, PPT presentations and augmented reality animations created by the Thing Pink agency. All the contents were designed and adapted specifically to be projected in 360°, giving the audience the sensation that they were actually inside the videos.

Surround sound was another key element in the event and had a very big impact, using 66 columns with 60,000 watts of power to produce a unique sound experience for the audience.

Desafio Global Ativism was delighted with the end result of the event: "The quality and content of the projection were crucial in fulfilling the goal of making the audience feel as ONE and sharing in an immersive experience in the EDP world", claimed Gonçalo Oliveira. "The multimedia content we created could only have been turned into a reality with the very best projection, and the truth is that the images delivered an incredible level of realism and colour. The quality Christie has accustomed us to is really excellent", he concluded.

Since the first event held back in 2004, this year's annual meeting was the highest rated by EDP workers. A survey held after the event to evaluate their level of satisfaction showed an overall positive rating of 99% among participants, and the projection was one of the most highly rated elements.