“The speed, the curves and the sound.” The new Honda motorbike with a stunning audiovisual show in a spectacular geodesic dome 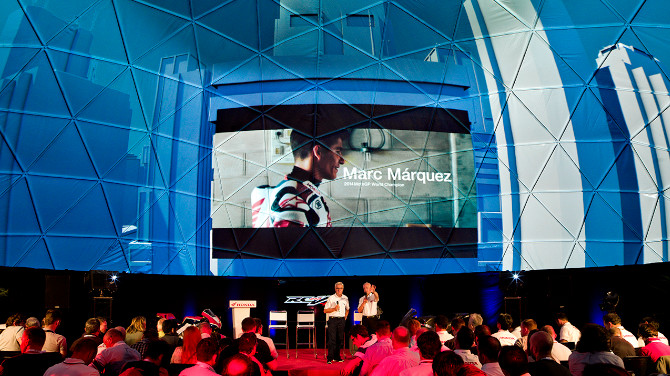 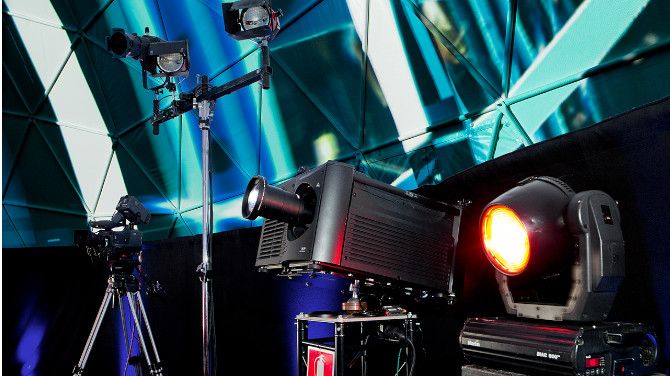 "I had a really exciting experience today. It's not easy to put into words the feeling you get when driving a bike like this, for instance the speed, the curves and the sound. That being said, this immersive projection managed to convey the sensations and to recreate the atmosphere of riding a motorcycle so realistically. The feedback we got from the invited journalists was super positive, and I am sure that we will repeat the experience again in the future."

What sparked Takashi Nakamura, a senior Japanese executive from Honda Motor Company's PR department, to become so passionate and expressive? The Japanese multinational, the world's largest manufacturer of two-wheeled vehicles, was looking to make a big impact with the launch of its new Honda RC213V-S, a road-legal replica of the MotoGP motorbike with which Marc Márquez won the world titles in 2013 and again in 2014. And what better way to present it than an exclusive event at the Montmeló Circuit coinciding with the Gran Prix of Catalonia in 2015.

Honda contacted Newmedia Technology Studio, who conceived a spectacular geodesic dome for the occasion with an internal projection system where Honda could present the bike to the world media. The dome, with a diameter of 16 metres and a height of 8 metres, was fitted out with six Christie Roadster HD20K-J projectors (3DLP technology, HD resolution, 18000 ANSI lumens) for a 360º screening of a video created specifically for the event that would give spectators a chance to experience for themselves the unique sensation of driving a high performance motorbike.

"When we reached out to Newmedia we were looking for a unique setting. So that the invited journalists could feel all the high-octane emotion of an unique experience, but we also wanted it to be first and foremost a technological event", recalled Carlo Fiorani, Racing Operations Manager for Honda Motor Europe and one of the organisers of the event, alongside his colleague Takashi Nakamura. After all, the new Honda RC213V-S is a limited edition motorcycle valued at over 190,000 euros –making it the most expensive Honda ever– which is only made to order and only one is produced per day at the factory in Japan.

Diego De Anna, CEO at Newmedia, explained Honda's interest in the 360º projection, or full dome, concept: "We were dealing with a cutting-edge hi-tech company that was looking for an innovative concept for its event. In this regard, full dome projections give audiences a chance to be more than mere spectators and become an actual part of the event itself. It provides a truly immersive experience where the audience is actively involved in the actual event, and it is also a welcome break from the video mapping that we have all come to expect."

To prepare the event it was necessary to install six projectors symmetrically inside the dome on truss structures at two metres high. Five of them projected around the base of the dome while the sixth projected on the dome itself, using blending and warping to create a seamless image.

The projection surface was 300 square metres and the resolution was 2800 x 2800 pixels. A short animation created by the New Zealand studio The Darkroom was screened in 3K resolution and full dome format which gave spectators the sensation that they were riding on a motorbike along different roads. This was followed by another video recorded specifically for the occasion and adapted to the curve of the dome but in 16:9 format and Full HD, in which you could see Marc Márquez on the Honda RC213V-S and speaking about his impressions of the new motorcycle.

The projections were managed using a Delta Media Server by 7thSense, as well as a Medialon show master control system. The whole installation was cabled for Ethernet. "The great thing about Christie projectors is that they integrate and interact to perfection in the work flow", explained Javier Ruiz, Newmedia's technology director.

He went on to add that: "In addition, the brightness and contrast of the projectors are outstanding. And as far as the lumens-weight ratio is concerned, it is probably the only manufacturer with a product that guarantees this much brightness in a lightweight package. Additionally, the tightly sealed hull means minimum noise. But, personally speaking, the most important feature of the Christie projectors is that they are so hard-wearing and tough, making them especially apt for constant use in different set-ups."

Diego de Anna underscored the projector lens: "For this kind of complicated event, the lens is absolutely crucial, because we not only focus on the centre of the curved surface, but also on the edges, where we have not just one, but five blends, which is not easy to achieve. With Christie's 1.2 lens you can focus on the centre as well as on the sides, and this means you can get the perfect polar correction."

Newmedia's CEO claimed that they never even considered working with any brand other than Christie: "Besides the quality of the product, which is unquestionable, the brand's back-up team in Spain is outstanding, and that means a lot to us when we are working on such complex events where there are always challenges to be ironed out."

Returning to the event itself, Honda's executives expressed their complete satisfaction with the show prepared by Newmedia: "The truth is that the projections were incredible and I was highly impressed with the quality and the degree of immersion achieved", said Carlo Fiorani from Honda Motor Europe. "You could really feel like you were riding the bike, which of course was our aim when we decided to organise this event", he concluded.