The Barbican’s into the unknown 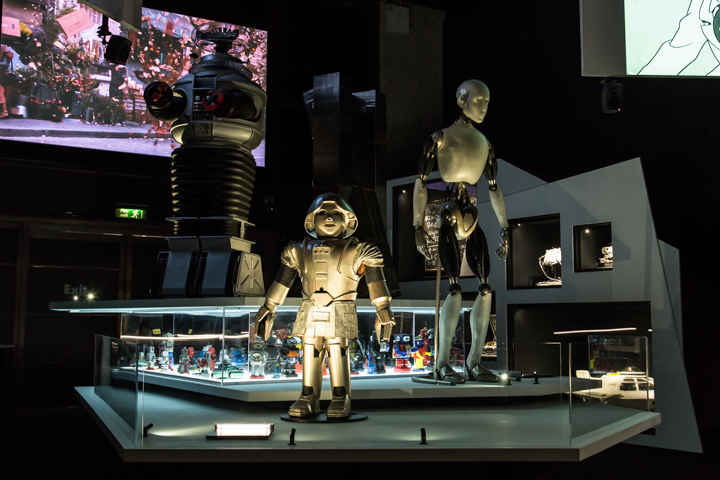 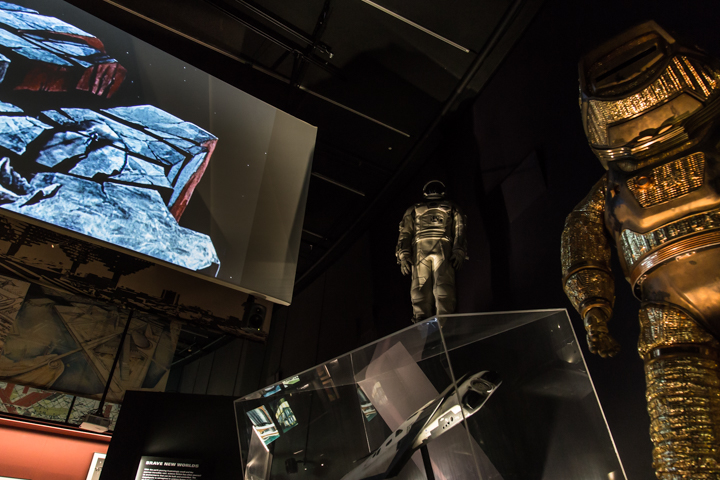 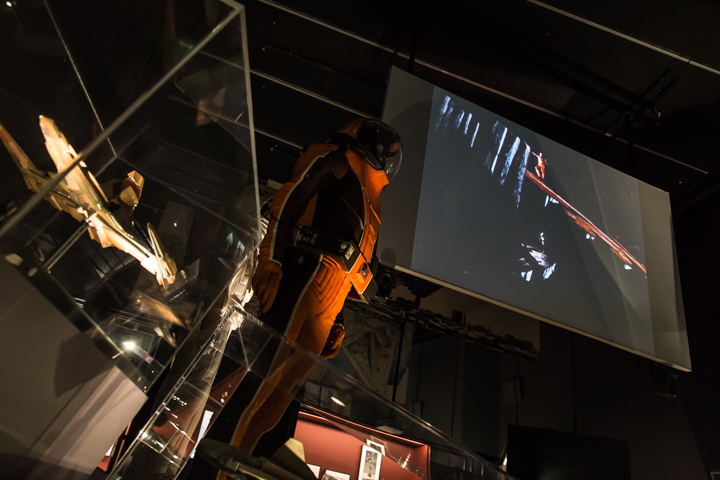 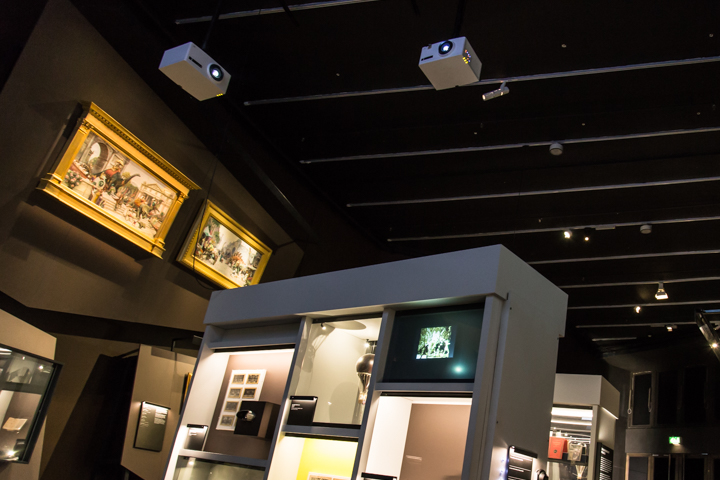 The Barbican’s Into the Unknown

"When the Barbican approached me, they said they wanted all of it! I was aghast," said Patrick Gyger, curator of what became the most ambitious science fiction exhibition ever seen - a staggering feat where the sci-fi buff could happily spend a day immersed in multiple media from early lithographs, comics or books and come face-to face with familiar aliens from films. "AV's role was vital," underlined Gyger. As we shall see, this is not just by adding a whole dimension to the genre itself. At the Barbican Centre, pieces were commissioned for the existing Christie AV in the foyer spaces of the Barbican; Christie projectors and flat panels were also picked to go on the global tour to major arts centres world-wide over several years.​ 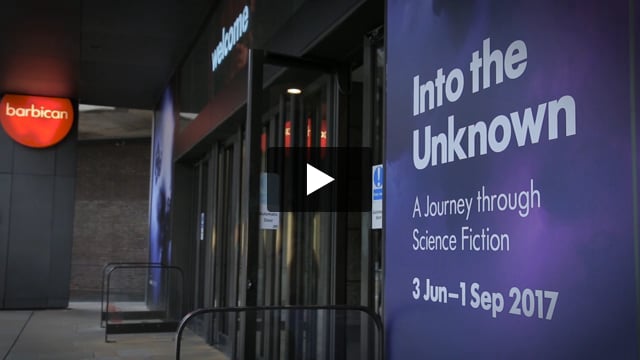 Whilst the Barbican's London building is renowned as a world-class arts and learning centre, its international division, headed by Neil McConnon, commissions exhibitions that travel on to other centres across the world. "My responsibility is to make sure we are creating dynamic and ground-breaking exhibitions, spanning multiple art forms and media," he explains. And to curate Into the Unknown, Patrick Gyger, was the perfect choice; a life-long science fiction enthusiast, historian, online bookseller and former director of Europe's biggest sci-fi museum, he is currently director of Le Lieu Unique, an arts centre in Nantes,

"The full science fiction story covers comics to manuscripts, toys to films, in both media and in a collection of objects. It's a very broad history," continues Gyger. "The ambition was also to discuss the genre in itself, not related to its context. There are other exhibitions which relate, for example, to science or the politics of science fiction. What is interesting is science fiction itself and how it explores the unknown. It's the exploration of the world, of space and reconstructing our own environment of dystopian space or inner spaces of the mind. Science fiction always goes into new territories."

One notable aspect about Into the Unknown was that it encompassed the vast exhibition in the Curve gallery. "Thanks to our long-term partnership with Christie, we already had AV in many of our public spaces, so we could take the sci-fi experience right through the building with a variety of specially commissioned pieces, short films from artists and a walk-in screening pod," continued McConnon.

As a result, audiences were immersed in the genre right from the entrance walkway. Here, a row of Christie laser phosphor projectors - with ultra short throw lenses - were tucked on the ceiling close to the walls to form a long display as you walked through the main doors.  "The production company behind the TV series, Black Mirror, came and saw the six Christie Captiva projectors, took the specs and created a specific one-minute installation for the display. We have never used that space in this way before, it's an absolute first for the building and the exhibition." explained McConnon.

Inside The Curve - From Aliens to AV

Walking into the main exhibition in the Curve Gallery, the designers had worked on a colour palette and lighting that plunged you into an unfamiliar and mysterious atmosphere. Early 19th century paintings of monsters sat eerily alongside old copies of Jules Verne in a glass case, progressing through to the tactile, and sometimes towering, models of aliens to Leonard Nimoy's suit from Star Trek.

Meanwhile, AV punctuated the static features and figures, starting with the earliest sci-fi films to an interactive exhibit. "As you move through, much of the AV is always in the corner of your eye; a moving image that brings not only life to the exhibition but immerses you," commented Gyger. "It is an over-the-top genre about larger-than-life characters. We wanted big, overlapping sound. We were really careful about how everything was placed and how projections related to each other." Christie DLP projectors from the G Series were used to show film clips including 2001: A Space Odyssey and Jurassic Park as well as a projection mapping display."

Gyger also underlines how the digital age has added a medium that lends itself perfectly to science fiction. "There are two things film and AV have brought to science fiction that are really essential to the genre. One is suspension of belief - science fiction relies on people putting normal belief aside and going with the story told to them - and film and special effects have absolutely contributed to making the genre popular and creating a world people can plunge into," explains Gyger, which he says, "Leads to a second major point - a sense of wonder. Showing science fiction in moving image completely transforms the experience, especially now with amazing special effects compared to the 1950s and 60s. This is something we tried to reproduce with The Martian exhibit."

Interactive AV - How The Martian was filmed

The Martian exhibit, towards the end of the exhibition, brought an interesting and perhaps appropriate twist in a nod to modern film. What is it like to be an actor in a sci-fi film in the age of special effects? The exhibit uses 6 Christie flat panels to recreate the mission control scene in the film by Ridley Scott where NASA communicated with Mars. The interactive exhibit aimed to give users the experience of being an actor making a film - following verbal instructions from the first AD (assistant director) to use the monitors.

"We wanted an element that was slightly interactive to illustrate the special effects, instead of showing actors in front of green screens," explained Gyger. "We approached Territory, a studio in London, because we thought it was interesting how they developed AV in science fiction - the design of future AV, the technology of the future - interactive screens and projection of the future."

"Territory had worked a year on The Martian - on all the motion graphics - and I think they were thrilled to have another type of audience appreciate their work," added McConnon. "It is really ground breaking and largely animated; actors are having to adapt to these changes and shooting can also be physically demanding. The show illustrates that to some extent, that progression from early animations to the latest motion graphics to acclaimed films such as The Martian."

"We learnt a huge amount over the last two years - from Patrick and from the show developing. You can almost chart the development of cinema, from the earliest 1950s stop-motion animation right through to Territory Studio, who work on major Hollywood titles", said McConnon.

"It was a real privilege to be part of Into the Unknown", says David Sheldon-Hicks, co-founder and executive creative director of Territory Studio. He adds, "Storytelling is our passion and lifting the veil on how our screen graphic animations directly supports narrative and the directors vision was exciting. Recreating the Mission Control set as an installation proved the ideal opportunity to share how our work helps actors' performance on set, explains story points to the audience and contributes to the atmosphere, tension and drama that drives the narrative. We felt that interactive experience was really brought to life by the quality, clarity and scale of Christie's screens, providing visitors with a sense of the set and an insight into the film making process".

"It was was fitting that The Martian was such a highlight because, just a few weeks before the exhibition - in real life - NASA beamed its first 4K broadcast from space in a much publicised event that made national news worldwide. Christie's Boxer series of projectors, which can handle true native 4K content, were used to project the images from space to a live audience on earth." observed James Belso, Christie's sales manager for the UK.

Exiting from the Curve into the everyday reality and lighting of the Barbican foyers, the experience continued with a further five exhibits. James Belso explains, "The four projectors used were already in-situ throughout the Barbican foyers as part of the Barbican-Christie partnership. All were laser phosphor because of the low maintenance,  continuous use and brightness needed in such areas. The main foyer – in one area - has a very large projection requirement with two HS-Series projectors stacked for a super-bright image. For the exhibition there was also a pop-up cinema pod with a G Series 1DLP projector."

"It was really important for me to have access to those projectors outside the Curve, because we could really show films not just clips," commented Gyger. "At least five artist films required a very high level display, as they were created by artists from around the world and set in a huge variety of locations, from dark monochrome landscapes to the bright desert sun."

The films are around 25 minutes long and were in the open spaces of the Barbican, allowing people to immerse themselves for longer. Contemporary artists are very precise in their requirements regarding lumens, size, light levels. They don't want a poor projection. Christie is a very reliable name and it helped convince them to allow us to use their work. The artists came and checked the exhibition to see if the projections were good enough and were thrilled with the results."

Gyger also created specific content for two Christie projectors in the foyers. Both were simple ideas that were extremely effective and engaging. Immediately exiting the Curve you could sit and watch a big screen scrolling first lines of science fiction books. "This was really important because you can get people into literature directly," commented Gyger. "In the other, History of the Future, we show important events of the future: for instance Britain in 2028 is ruled by a fascist dictator or in 2035 the Nobel Peace Prize is won by Lady Gaga. Knowing the projectors were available helped us devise creative ideas."

"Everything in the Curve will tour, including the AV, as will the Christie Captivas showing the Black Mirror installation," according to McConnon, with shows in Denmark and Greece following on directly from the Barbican and then travelling to galleries worldwide.

"The collaboration with Christie is not just in London," explained McConnon. "The maintenance and service that will be provided by Christie globally is absolutely unprecedented and is a major reason why we wanted to work so closely with Christie on the tour for Into the Unknown. If we roll the show out in Rio, as we fully intend to, we know that if there is a glitch we can rely on the support locally through Christie to keep the show maintained and everything up and running 100% all the time."​

James Belso, sales manager of Christie UK, summed up the strength of the partnership in supporting such a major arts exhibition: "One of the many aspects we love about our partnership with the Barbican is the sheer variety of content as well as the level of artistry. It is a great fit for us because we can really showcase the range we offer, be it projection through from 1DLP or 3DLP , lamp based or laser phosphor, ultra-short to very long throw lenses, various brightness and  resolutions as well as other display technologies such as our flat panels and direct-view LED."