SEVILLE, Spain – LumenAd, a Seville-based advertising company, has recently acquired two Christie® Crimson laser projectors to use in its projects with digital out-of-home (DOOH) media, giving them the advantages of unprecedented size, image definition and greater versatility for outdoor advertising. 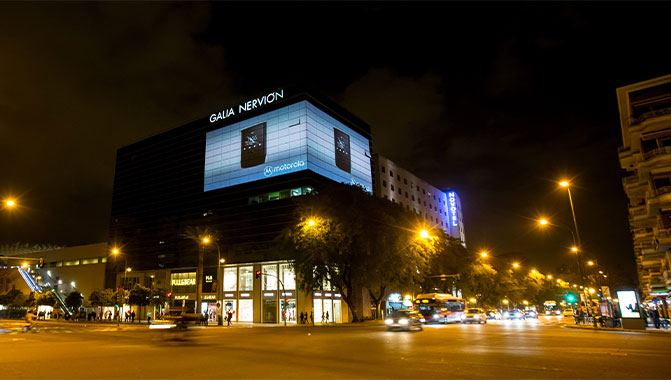 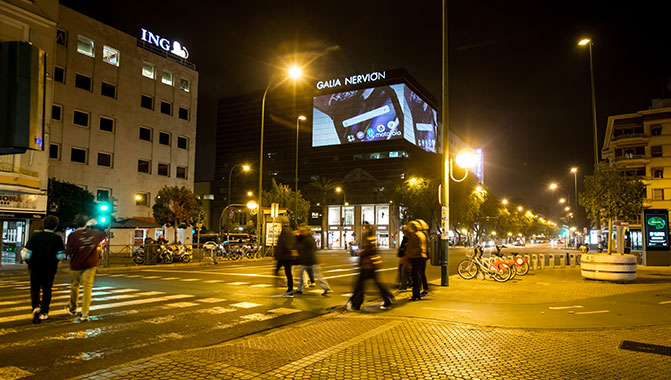 LumenAd now offers video projection for outdoor advertising as an alternative to conventional platforms like paper, vinyl, canvas and LED. In doing so, it is bringing to the market a new kind of high quality, versatile advertising that seamlessly integrates into the surrounding environs. This premium support, called Big Brand, is aimed at major brands that wish to reinforce their image by identifying with values like respect for the environment, quality and innovation.

Alfonso Callejas, CEO of LumenAd, explained: “In addition to the size, image quality and versatility, the video projection ensures impeccable visualization in DOOH projects, and also affords other major benefits in terms of environmental sustainability and its non-aggressive integration in the urban landscape.”

The company is using the two Christie Crimson projectors in a DOOH installation on the facade of Galia Nervión, a well-known building located in the heart of Seville’s main shopping district. The screen is strategically placed at the crossroads of two of the city’s main avenues, which is a high traffic area frequented by vehicles and pedestrians.

From a technical viewpoint, the installation is an international milestone given its complexity and novelty. There are three buildings involved: two of them host the projectors on their rooftops while the third (Galia Nervión) acts as a screen. The equipment is not visible and does not occupy the public space, which makes its integration into the urban landscape optimum.

Besides the actual projector itself, one of the two “projector buildings” also houses the equipment for content playback and the monitoring and control systems, all of which are completely automated and remotely controlled. To synchronize the two screens, the video signal is relayed wirelessly to the second projector, producing one single screen split down the middle by 90 degrees at the corner of the building.

To protect the projectors outdoors, LumenAd designed a special casing that accounts for factors including humidity, ventilation and waterproofing. The throw distance of the two projectors to the screen is approximately 50 meters, and the distance between the projectors is 90 meters. The screen can be visualized from 10 to 300 meters.

The content is only screened at night. It was decided to forego use during daylight in order to make a bigger impact at night and to ensure that the messages stand out clearly in the urban space. At the same time, the projections fulfil all existing environmental regulations on the maximum light output of information supports at night. Some of the brands which have already used the support are Telepizza, Motorola, Vodafone, McDonalds, and Beefeater.

“Unlike LED technology supports, which generally work with low resolution, here we can assure a minimum of High Definition (HD) and the possibility of screening in 4K, giving brands the guarantee of impeccable visualization,” says Callejas.

The LumenAd CEO explained why they decided to opt for Christie Crimson 3DLP® technology laser projectors: “I would say that the main reason is the lamp consumption. Calculator in hand, if you bear in mind that the installation is operating an average of five hours a day, 365 days a year, you would need 4.5 lamps (400 hours, without taking them to their limit). The Crimson’s 20,000 hours of operation, even reducing it by half, means a big saving on running costs, and if you multiply that by two, as is our case, then the savings are even greater.”

He added: “Apart from the issue of the lamps, we also looked at the requirements for power consumption and ventilation, which are less in the Crimson as compared with the Roadster; this was very important for us, considering that we are operating outdoors, inside our own self-designed casing, and it allows us to better control issues like humidity. I was also swayed by the precision of the electronics, the built-in Christie Twist, and the much more complete information on the projector like temperatures, and the preview screen.”

Alfonso Callejas did not wish to conclude without recognizing “the wonderful consulting work by Julio España and Jorge Vilaplana on behalf of Charmex (the Christie partner who supplied the projectors), and also Marcos Fernández and Carlos Lachica from Christie España.”