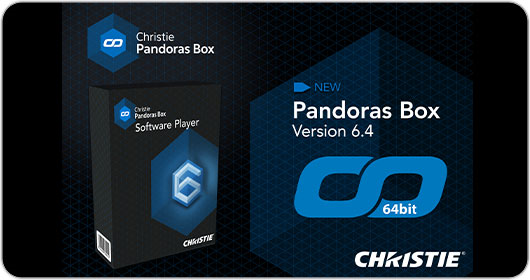 More flexible and faster than ever, Pandoras Box 6.4 combines the latest processing technology with intuitive media and show control. In addition to several new features on the redesigned interface, the performance of all systems has been significantly increased, with the updated software unlocking additional resources from existing server hardware. Working completely in 64-bit, the render engine – the centerpiece of the product – is now ideally adapted to the operating system. Pandoras Box can make use of additional resources, such as system memory, or process more calculations in parallel. These performance-boosting improvements allow the simultaneous playback of more or larger video files.​

"We are pleased to have significantly increased the performance and speed of Pandoras Box with the 64-bit version. Tests have shown that depending on the video codec we were able to generate up to 35 per cent more output," says Markus Zeppenfeld, product manager, Christie Pandoras Box. "This is also great news for customers using our Software Player on their custom hardware systems, as even they will benefit immensely from these improvements."

Through the facelift of the redesigned user interface, the software has become clearer and more structured, making it easier and faster to keep an eye on important data or settings. Additional icons also facilitate intuitive operation and give the user direct access to key functionalities. Another new feature is ​the revised QuickTime decoder, which delivers faster decoding, includes hardware acceleration and supports additional codecs such as H.264, HEVC, ProRes, and DNxHD.

Christie Pandoras Box 6.4 will release its full potential and power all displays at ​ Christie's ISE stand 1-H70 in Amsterdam.