VANCOUVER –  The Laura C. Muir Performing Arts Theatre at Douglas College has undergone a significant upgrade, which includes a Christie® Crimson 3DLP® laser projector, and most recently, the installation of a Christie D4K40-RGB pure laser projector.

Douglas College educates close to 25,000 students a year, with two major campuses in Metro Vancouver. The Muir Theatre, located on the New Westminster Campus, is a fully equipped 350-seat facility used by students from the Theatre and Stagecraft programs who produce a production each semester in the theatre, as well as the Music Department for performances and classes, and by other departments for lectures and conferences. The College also rents the theatre for dance and music performances, as well as conferences. 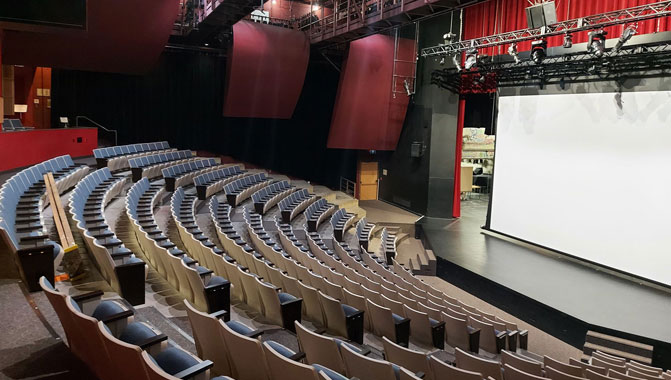 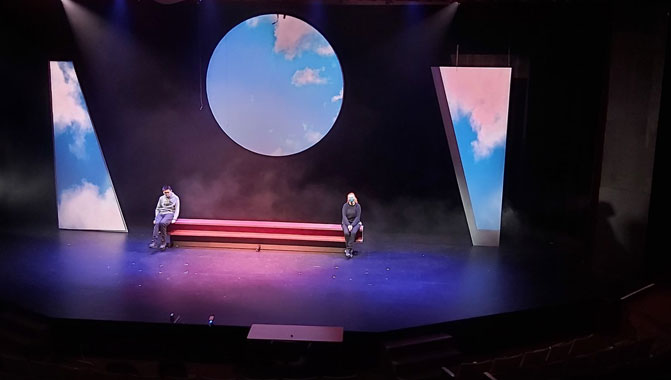 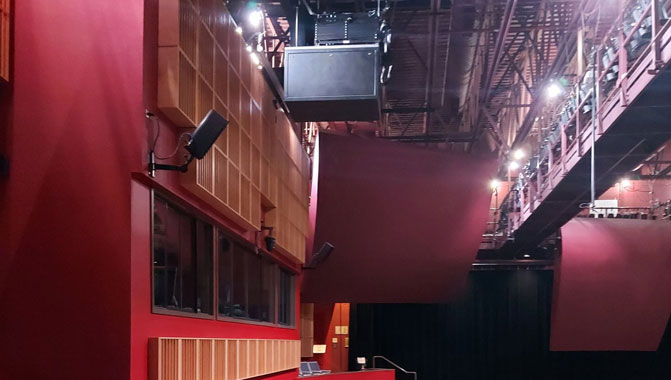 The upgrade to Muir Theatre was completed in two phases and began in 2016 with lighting, video distribution and projection. Working with Scott Miller, Ryley Pynn and George Davidson of DWD Theatre Design and Sapphire Sound, the first phase included the installation of a Christie Crimson 3DLP laser projector for rear projection on the stage, which is used for conferences and events that require a smaller screen. The second phase, which began in 2019, saw the installation of a Christie D4K40-RGB pure laser projector.

“The primary objective of this second phase was to provide the Muir Theatre with the capability of showing cinema-grade movies and to be used during performing arts events and classes to provide dynamic backdrop images on the existing cyclorama or on our new screen,” says Brian Pratt, Theatre and Stagecraft Technician Supervisor, Douglas College.

DWD Theatre Design and Consulting specified the D4K40-RGB pure laser projector after evaluating both the needs of the college and other projectors available on the market. “It met all the parameters: we wanted a large-format projector that had a combination of features and lenses and would work in a hush box. This was the one that ticked all the boxes,” says George Davidson, DWD Theatre Design.

The projector also had to be bright enough to cut through the front lights and light up the performers during a performance, while maintaining high-contrast, vibrant images. “Douglas College wanted a laser projector, so they didn’t have to replace lamps. And looking at the specs, the D4K40-RGB provided the best color rendering,” adds Davidson. The college uses the projector with two different lenses, which allows them to fill a smaller presentation screen, a cinematic projection screen or the entire stage.

“The projector was installed in a Tempest projector enclosure. Although the Christie D4K40-RGB is very quiet, the projector is installed above the last couple rows of seating and any additional noise would be distracting during live performance, so the goal was zero added noise,” says Pratt.  The projector and enclosure are installed onto a lift, which allows the projector to be stored completely out of the way when not in use and brought down for maintenance or lens changes.

While COVID caused some delays, the installation largely went as planned. “We had to ensure that the equipment would fit through the hallways, and we did renderings,” says Steve Klassen, Sapphire Sound. “The flexibility of the college, and the leadership of DWD Consulting, as well as the right manufacturers, ensured a smooth process. Everyone was committed to making this project work.”

Says Davidson, “It was really nice to work on a project that was done right. Douglas College wanted this to be a showcase project, and this will last them for years. It meets every spec today, and likely will for a decade.”