MOSCOW – Russian National Flag Day was celebrated on a large scale this year, with a number of cities planning as many as three special events to mark the occasion. The central events took place in Moscow, with the iconic facades of the capital’s buildings coming alive with projection mapping for several evenings. The key event in the city was the projection onto the White House, the House of the Government of the Russian Federation, as this was the first time in history that the building façade had been illuminated using projection mapping. Big Screen Show (BSS), which organized the historic event, selected 36 Christie® Boxer 4K30 3DLP® projectors.

National Flag Day was established in 1994, and has been celebrated annually on August 22 ever since. 2019 is a special anniversary year, since the Russian flag is turning 25 years old, so festivities appropriate to the occasion were arranged. Arkady Gerbovitsky, Commercial Director and one of the founders of BSS, said, “It was a great honor for us to be able to work on this project. Of course, it was also a tremendous responsibility. The White House, just like the flag itself, is one of the country's most important symbols, so the bar was set high. Before we attempted it, no one had ever projected video onto the facade of the White House before. We’re naturally proud that we managed to do it." 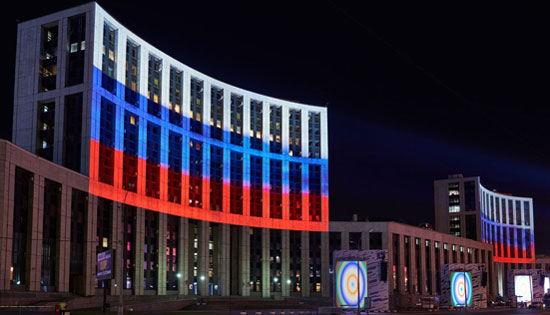 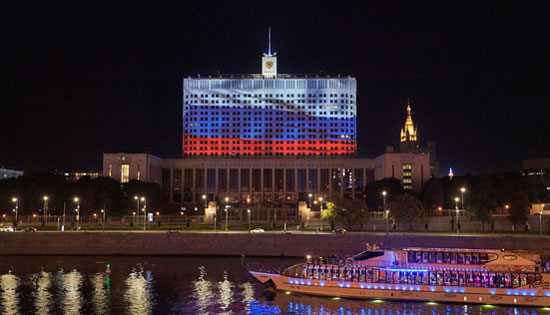 A dynamic image of the Russian tricolor with a resolution of over 1 million pixels was projected onto the White House for four days in late August courtesy of 36 Christie Boxer 4K30 projectors. The projectors were installed across from the House of the Russian Government on two towers on the Moscow River embankment, at a distance of approximately 115 meters. What appeared to be a single projected image was in fact composed of 12 frames (4 frames wide, 3 frames high), with each frame measuring 34x18 meters, with a total projection surface of 5,500 square meters. Due to the high brightness and the 4K resolution of the Christie projectors, the central part of the facade displaying the tricolor could be seen from many places around the city, including from the water and aboard pleasure boats.

"The number and variety of projects that we have completed using Christie Boxer projectors represent more than just a list of events. The story behind each one of them is unique. But it is a true honor for us to be able to add this particular facade to the portfolio of sites that we have worked on. Naturally, the tight deadlines and the strict protocols governing the facility's operation were special factors that influenced how we worked on the project,” Evgeny Marinichev, Technical Director of BSS, noted. “But thanks to some good teamwork, everything went as planned. Of all the features that the Christie Boxer projectors offer, the IP management capabilities proved to be particularly useful."

A team from Christie partner dreamlaser also worked on site near the White House. Some of the Christie Boxer projectors, along with the video servers, were transported from Nizhny Novgorod to Moscow.

During the anniversary celebration for the Russian tricolor, another facade in the capital was also covered in a video projection mapping: the building complex on Prospekt Akademika Sakharova. Three towers fitted with 12 Christie Boxer 4K30 projectors were installed on the opposite side of the avenue, each projecting onto a separate facade of the tripartite structure. The image was projected onto the upper part of the facade of the iconic Vnesheconombank complex.

“In addition to the tight deadlines that we had to meet on this project, we also had to deal with the special architectural features of the building: the facade featured contrasts between light exterior walls and almost black windows,” Evgeny Marinichev continued. “So we conducted preliminary tests in order to ensure that the flag’s image could be projected at an acceptable quality level. Here, we also worked with 4K content across a projection area of 65x35 m. Again, the IP management features proved to be very useful to us here, just like they were at the first site.”

The flawless color reproduction of the Christie Boxer 4K30 3DLP projectors also played an important role: “As in our previous projects, we again found that it was vital to work exclusively with this equipment, since we have boundless confidence in its capabilities and specifications. In particular, we relied on these projectors to accurately reproduce the flag’s colors, which are strictly regulated. This was especially tricky given the scale of the projection. Now we can say with confidence that everything was carried out to the highest level. The projection was visible from bridges, from the water, and from the city streets.”