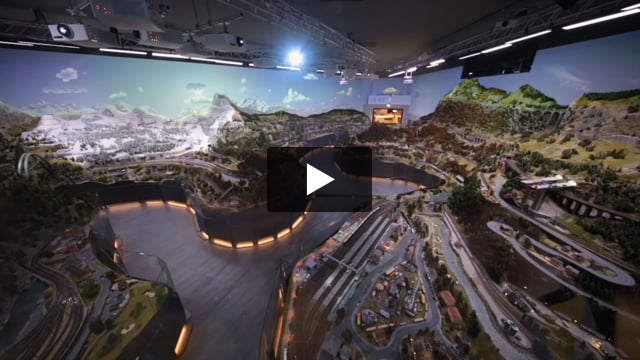 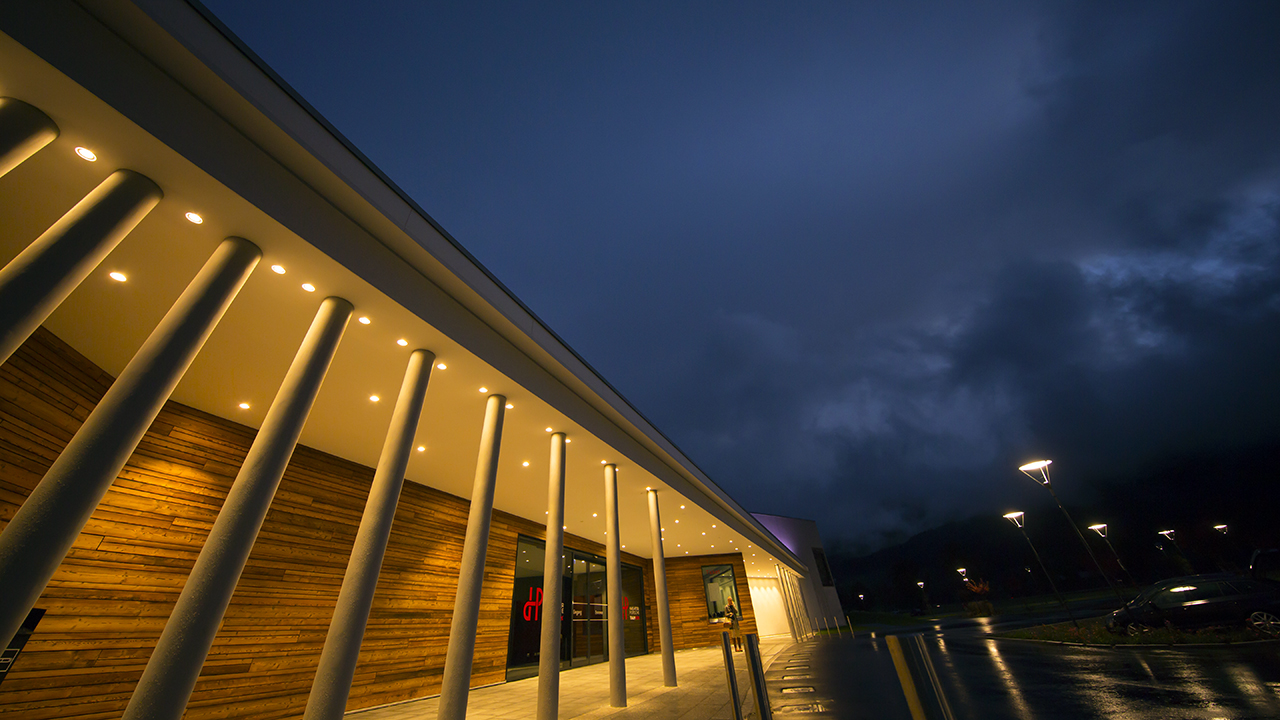 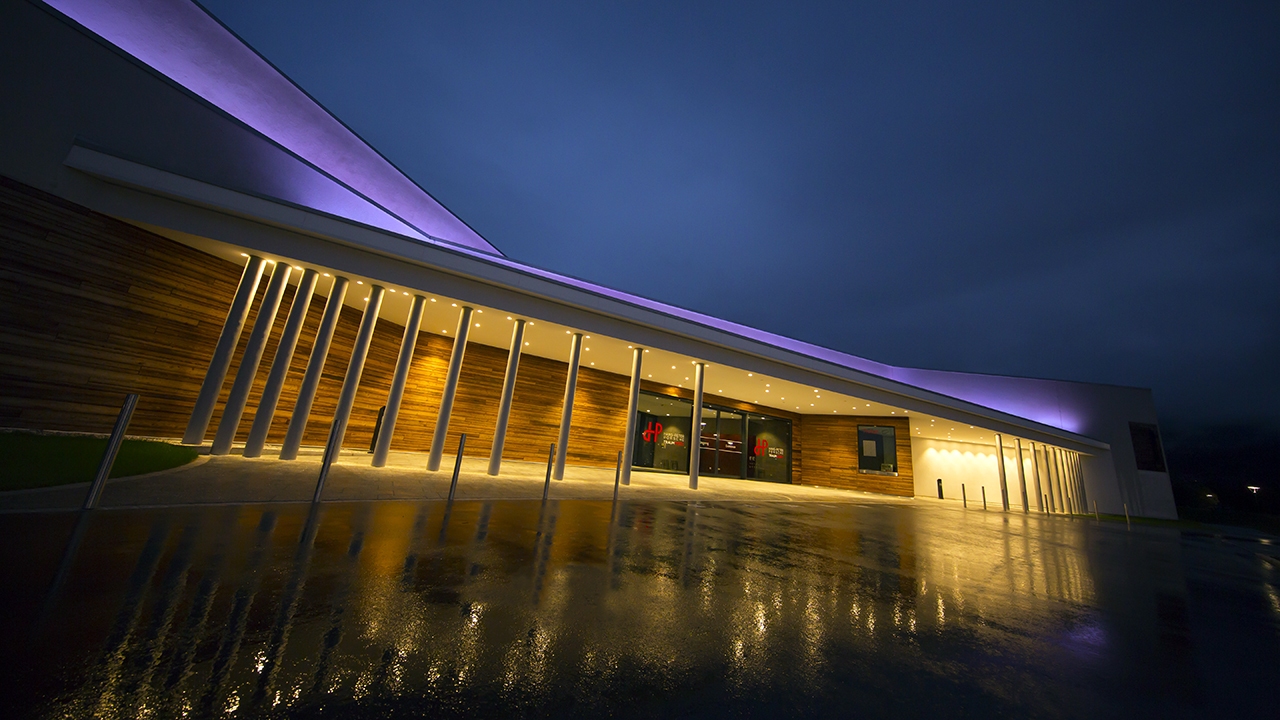 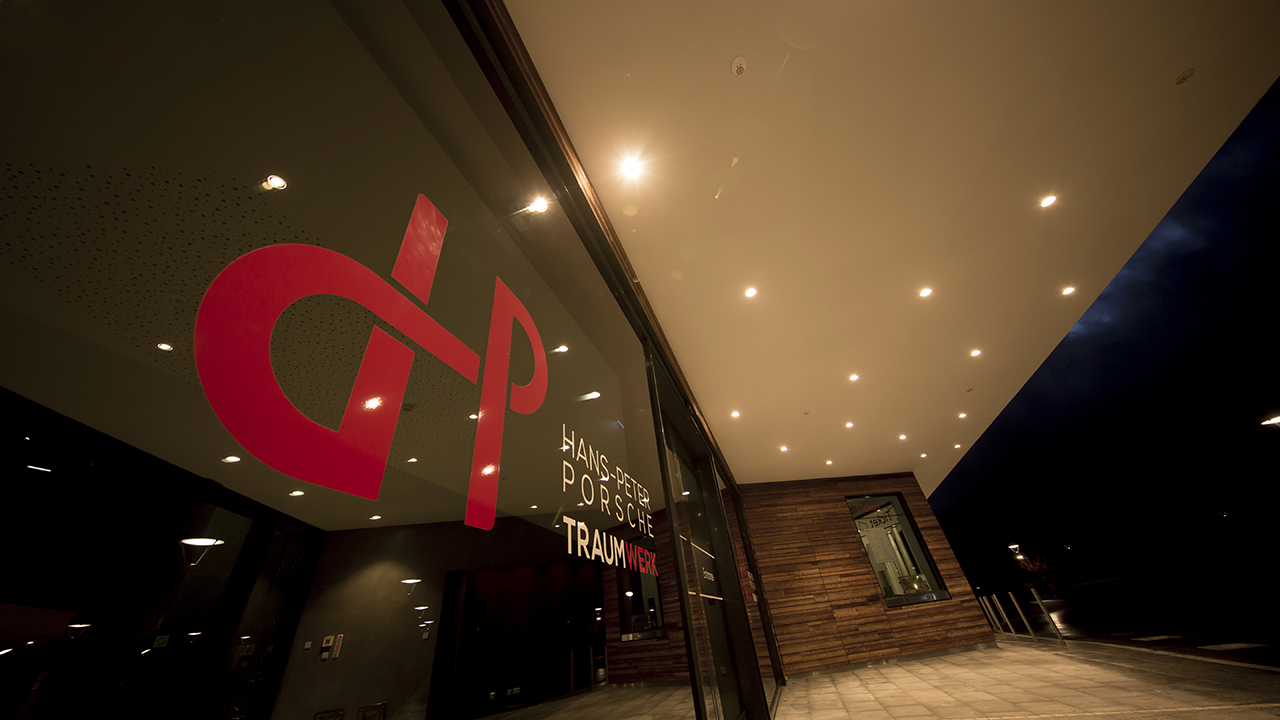 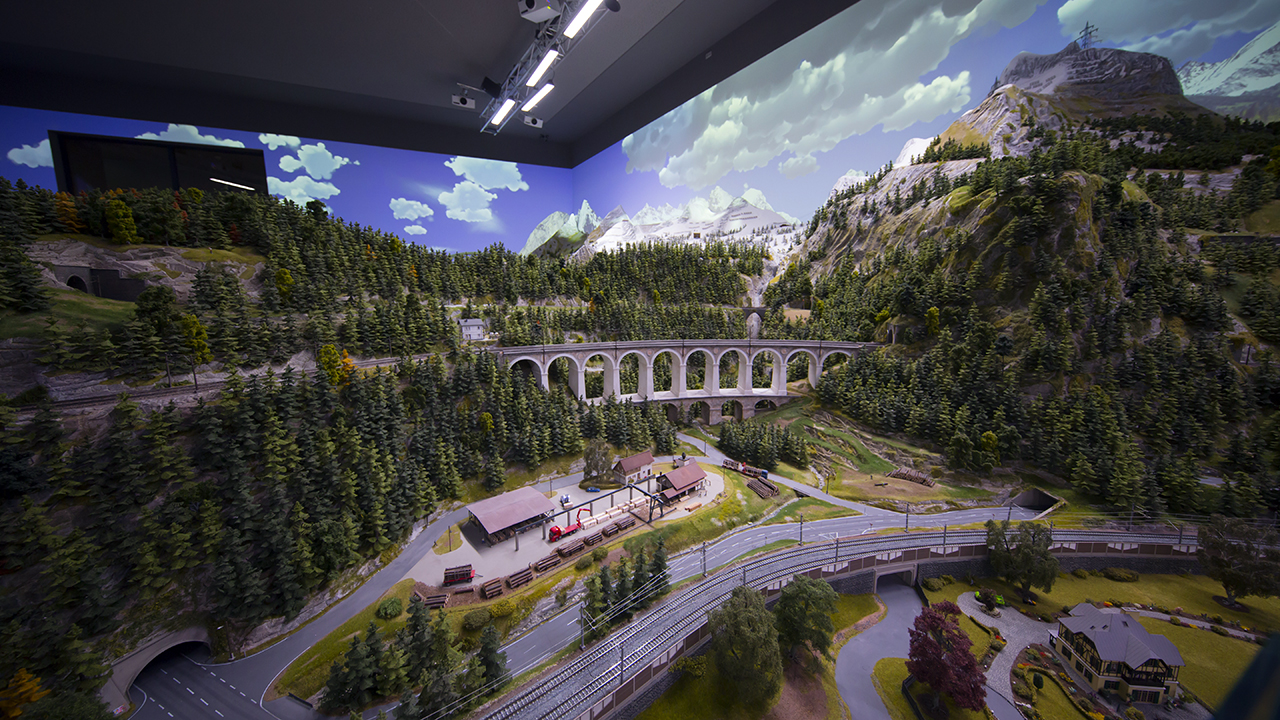 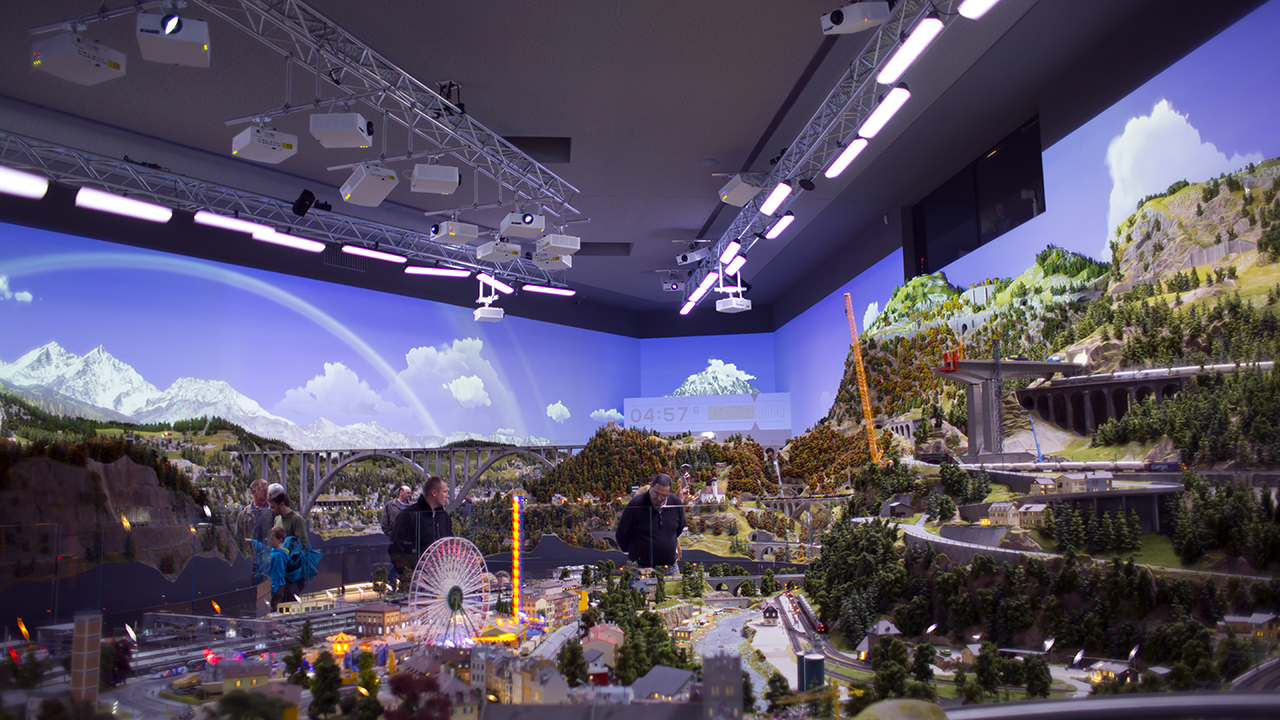 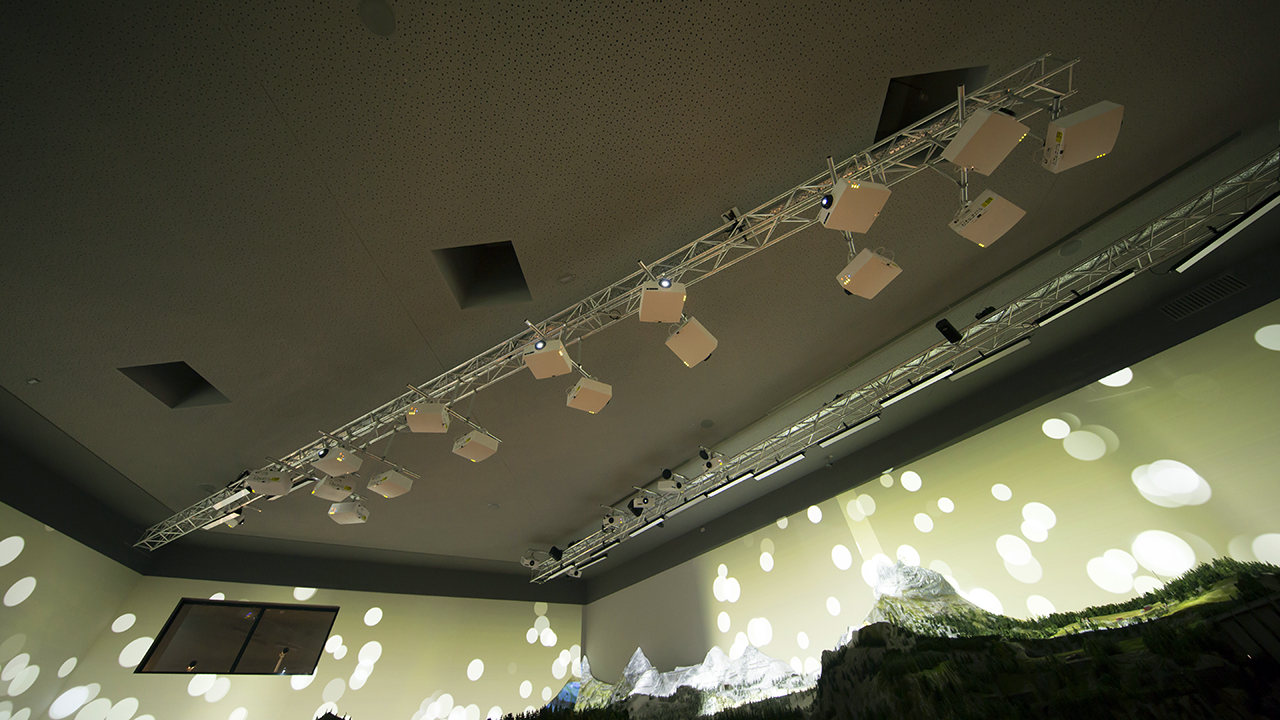 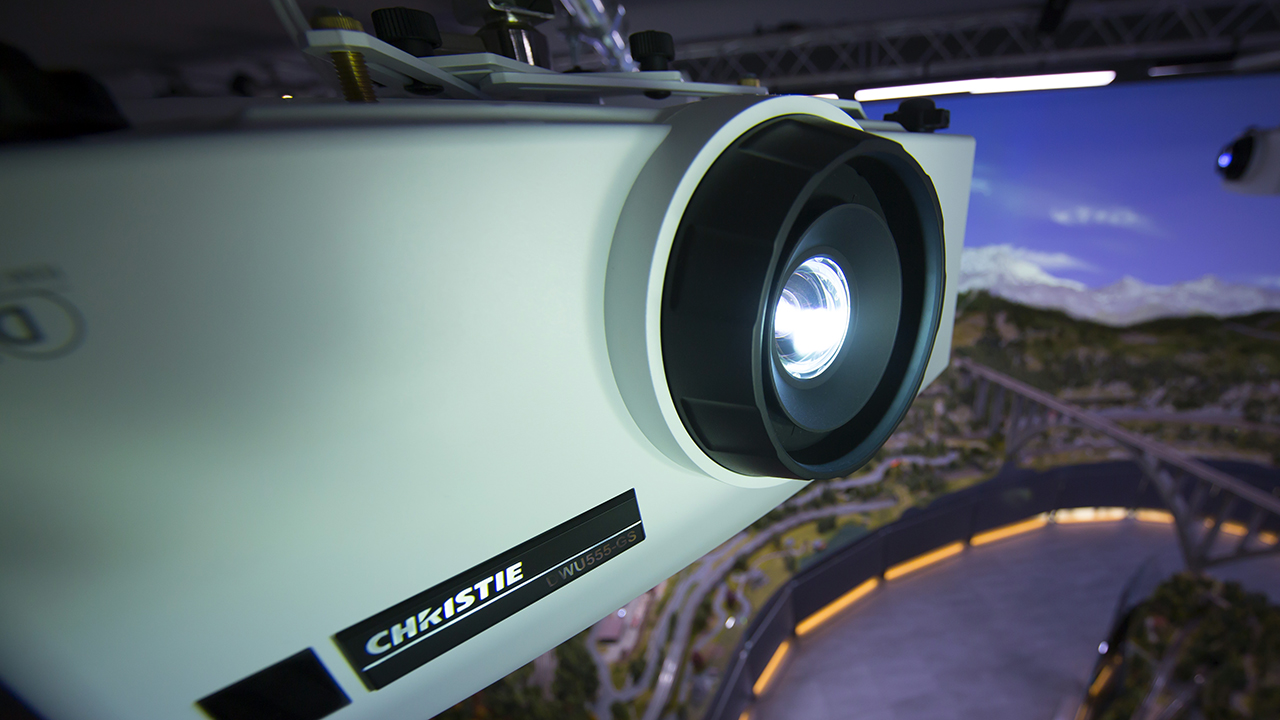 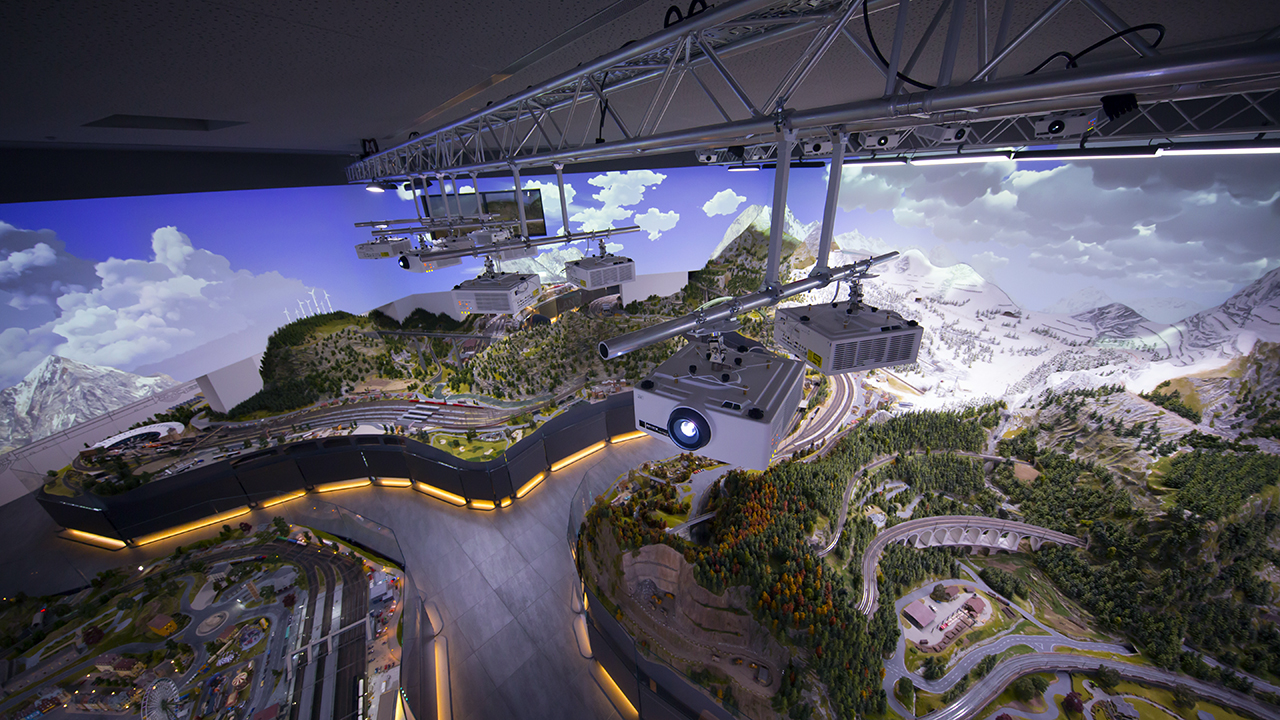 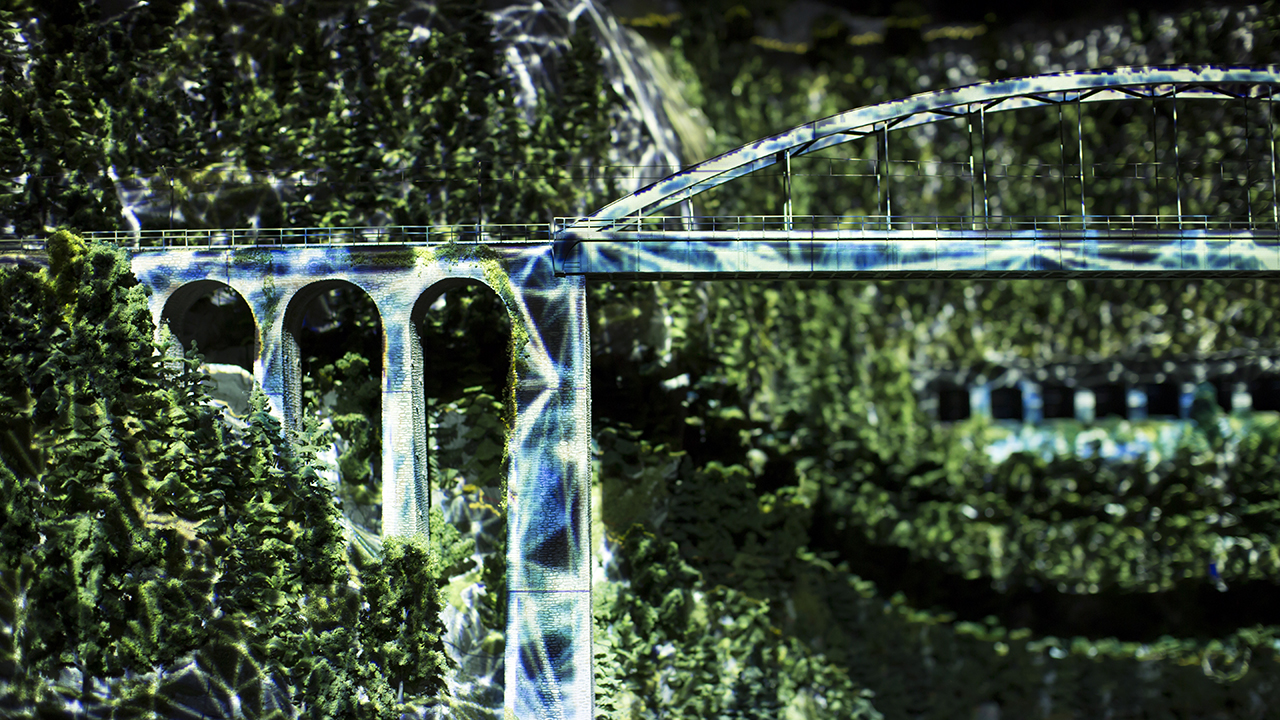 Hans-Peter Porsche TraumWerk, which is idyllically located in the Berchtesgaden countryside, invites toy fans and nostalgic model railway enthusiasts to join them on a special journey. The company has 5,500m² of space to exhibit historical tin toys, steam engines, automotive rarities and a 21st century model railway. Hans-Peter Porsche is fulfilling a long-held dream by exhibiting his extraordinary toy collection to a wide public.

At the heart of TraumWerk is a 400m² model landscape, where over 100 trains travel through an Alpine setting. The train journeys through a traditional landscape of modelled miniature people, buildings and landmarks brought to life by projected images. Images which extend beyond the table-top and help create a much larger world than the miniature landscape itself; as the train passes by projected vistas of rolling fields, looming mountain peaks and majestic waterfalls. The landscape has been created with the loving attention to detail you might expect from an enthusiast. It uses the projection technology to not only project the landscape, but project far more subtly changes onto the model buildings that the trains pass by. So as the landscape changes from day to night so does the model environment and its houses, office blocks, churches and sporting arenas. A loop of around 20 minutes simulates day and night scenes along with a multitude of weather conditions, culminating in an impressive 2-minute mapping show.

The team were give just four months from planning to final implementation to achieve this miniature wonder. "Within this relatively short time, it was especially difficult to create a technical  concept that would not overshadow the exhibits. And yet would still be suitable for multipurpose use and could be seamlessly added to the existing environment," says Nik Burmester, CEO of Burmester Event & Medientechnik. It was also essential for the technology to be fail-safe and low-maintenance, despite long operating times. This was particularly crucial for the projectors. "We selected the Christie DWU555-GS because it does not need any bulb or filter changes and because it provides around 20,000 operating hours." With its RealBlack® the GS Series models offer excellent contrast rates and a perfect black, as there is zero light output when the feature is enabled. Other reasons they opted for Christie's solution included the projector's compact size and economical energy consumption, and the fact that the casing was white, which meant the device became an unobtrusive addition to the room.

Securing an accurate 3D depiction of the room and landscape was essential for for planning and implementation. Innovative scanning technologies and software tools were employed to test and evaluate different project setups; in line with the various requirements and restrictions of the project. Based on the final plans, 3D objects and UV maps were created of the model and landscape surfaces to be projected on. "For the final 3D model, we needed to condense a huge overall amount of data – around two terabytes  capturing 500,000,000 scan points – and various data formats into a single file," says Burmester. It was particularly crucial that reducing the size of the model did not result in any significant data loss.

When producing the mapping, the whole landscape of approximately 550m² had to be scanned, each individual building and landscape element, plus background walls. "To do this, we used the test images produced with the UV maps and applied them to the relevant 3D objects, before adjusting them to the actual 3D geometry," says Burmester.

Thirty-nine Pandora's Box Players were deployed for the content playout. The projectors and playback devices are controlled using the Widget Designer PRO via a three-way interface, and continuously provide a status indication.

"We were looking for an easy-to-use control solution that worked efficiently and also offered player functions like wake/shutdown on LAN and projector functions like on/off and source selection," Burmester says. In addition, they needed to be able to connect their own system's emergency shutdown using a relay switch (via Sensor Link). Two STD-range Pandora's Box Managers were also deployed to provide synchronized show control of all the playback devices.

In addition, the overall exhibition integrates various interactive elements using the technology. Pfadfinderei's produced content to put visitors inside a train carriage, or in the driver's seat of a locomotive. Three Christie FHD651-T, 65-inch LCD displays with intuitive touch surfaces enable visitors to get detailed information about each of the individual trains moving around the model landscape.

Since the exhibition's successful opening in summer 2015, visitors and technical managers alike have been impressed by the innovative concept. "We are delighted at our success in capturing the room's special atmosphere and in achieving a 3D projection that also extends the room without being obtrusive. The bright colors provided by the Christie DWU555-GS support this concept," Burmester says. Pandora's Box makes the playout and control of the entire installation very user-friendly, despite how complex it is.

"Traumwerk is the realization of a long-standing dream of Hans-Peter Porsche. We are proud to offer our visitors a fascinating world and impressive spectacle by combining a traditional model railway with a 360°projection mapping onto the back walls as well as onto the diverse element within the landscape itself," concludes Felix Schwenk, Project Manager at the Hans-Peter Porsche TraumWerk.