A tall blue tower now stands above the iconic buildings in Leicester Square. The Londoner is the world’s first super-boutique hotel. It’s also the world’s deepest. At six floors below ground level and a cost of £500m GDP (over U.S. $596K), it is the new flagship for The Edwardian Hotel Group and latest project for self-made billionaire Jasminder Singh. The accountant son of a postmaster, Singh and four uncles came together to buy their first hotel 40 years ago and the family now own a portfolio of stunning hotels in the capital.

It is vast. Guests sleep in one of the 350 loft-inspired rooms, access multiple restaurants and lounges, go up to the rooftop bars, or down to an underground spa and swimming pool area. One of the distinguishing features is an impressive collection of original fine art. According to the London press, it is the new place be seen. The star attraction is a ballroom that caters to large events, 650 seated or 850 at a reception, with an amazing audio-visual system, including four Christie D16WU-HS projectors. 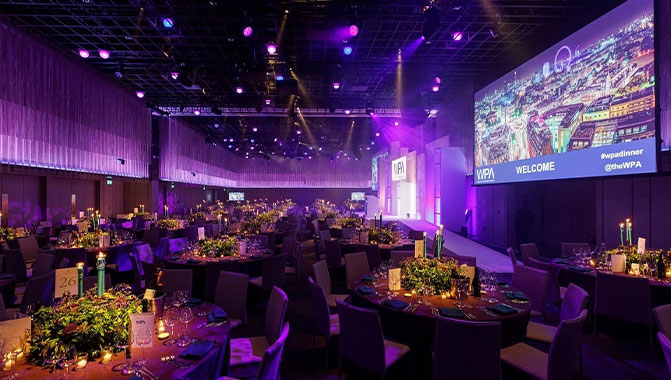 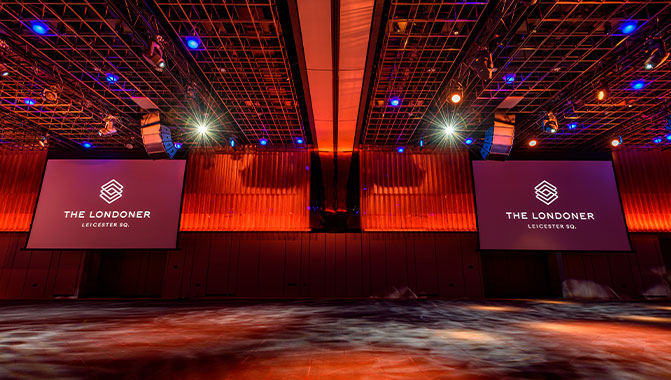 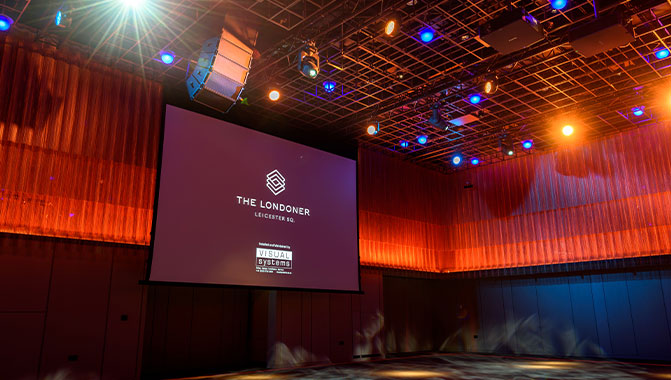 “The client wanted the ballroom to be the best in the country and that’s what we aimed to provide,” explained Ray Sappal, the project director. Visual Systems was commissioned by Arup, which led and delivered all engineering and extensive specialist services for the hotel design, from inception through to construction, with the company not just acting as integrator but taking on the role of consultant. They oversaw a staggering feat of AV which was soon recognised at Integrated Systems Europe (ISE) AV trade show, winning the InAVate award for best hospitality project 2022 & winners of the best hospitality project at the Integration awards at Infocomm Las Vegas , this project also won the Smart Building awards for the best Hospitality project 2021.

The longer wall in the ballroom has two five-metre-(16 feet) wide screens side by side. The seating often towards this wall when the whole room is used with projection in landscape mode, but the room can also be divided. There are a further two screens at either end of the room, each 6.2m (20 feet) wide, which can be seen in portrait mode.

“There was a decision to be made between the Christie D16WU-HS and an equivalent competitive model. We invited both companies to demonstrate the projectors and the Christie D16WU-HS won the shoot-out. What the client particularly liked was the ability to operate it at 50% brightness on eco mode yet it was still very bright. The client also thought the quality of the image on the Christie projector was much better - and much more natural - as well as sharp and bright,” explained Sappal.

Sappal shares, “To stretch the AV budget, we were looking for a 1DLP® solution but for such a prestigious setting, we needed high quality.” The HS Series was ideal as it had been specifically developed to raise the benchmark over standard 1DLP® projection with the enhanced color performance and saturation of patented BoldColor Technology. Many other functions were also of benefit.

“It was useful that we could control the projector through IP. We are controlling everything through an external (source). IP allows control over the whole room,” Sappal commented. “There were also several lens options. The size of the screen and distance from the projector meant we needed a zoom lens so that the projections would fit the screen.”

Connectivity was another benefit. “We can use SDI as well as HDMI,” according to Sappal. “You can run HD over longer distances with SDI and this is a large space.”

“There is affordability and the client will enjoy cost savings, as the client has a huge amount of use for these projectors. With laser they will achieve low maintenance, plus there are no filters to change,” Sappal continued. “The long warranty was also very appealing, and appreciated by both the client and ourselves. The projector being black was also useful as it blended into the décor, an important point given the design considerations throughout the building.

The ballroom has already hosted several high-profile events, including the BAFTA pre-launch, a Vogue (anniversary) and several celebrity functions. “It’s an important source of revenue,” Sappal said, “So really useful that feedback on the projection has been excellent not just from the hotel but their customers who have commented on how the images are sharp and bright.”

For Sappal the project has been a highlight. “On a personal level, this project has been very special as a unique hotel in London with such scale and complexity. It was intriguing working in a project dug 30 metres (98 feet) into the ground and quite surprising when you think of issues such as metro tunnels or what could have been unearthed. It was a challenge. The cabling in the infrastructure alone ran to 40,000 metres (25 miles feet?) – probably significantly more - so we could have coverage for any type of signal.”

“We were handed Arup’s initial performance specification document and we had to develop, design and scope the AV system’s requirements in conjunction with the client’s project team,” he concludes. “We feel we have given them everything that they could require now and for the future and more.”