DUBAI – The Russia Pavilion at Expo 2020 Dubai is drawing visitors in with its striking exterior, and once inside, offers guests a view into the regions of Russia, as well as the scientific and cultural achievements of the country. The focal point of the pavilion is “The Mechanics of Wonder”, an immersive installation that uses seven Christie® 3DLP® projectors and Christie Conductor software to projection map visuals onto a model of a human brain. The installation was conceptualized and planned by Simpateka Entertainment Group, with video content produced by dreamlaser, and equipment and technical support provided by Big Screen Show. Christie Professional Services is providing maintenance and support of the system.

Visitors to Expo 2020 Dubai are drawn to the domed structure of the Russia Pavilion, located in the Mobility District, whose outer surface is composed of intertwined thread-like tubes of various colors. The bright colors and constantly shifting alignment of the tubes symbolize the eternal cognitive process. Once inside, the focal point of the Pavilion is “The Mechanics of Wonder”, designed and created by Konstantyn Petrov and Simpateka Entertainment Group. The installation is a massive 3D kinetic model of the human brain, rising from the floor atop of a spinal cord, and includes diodes on the ceiling and floors and screens around the perimeter of the room. 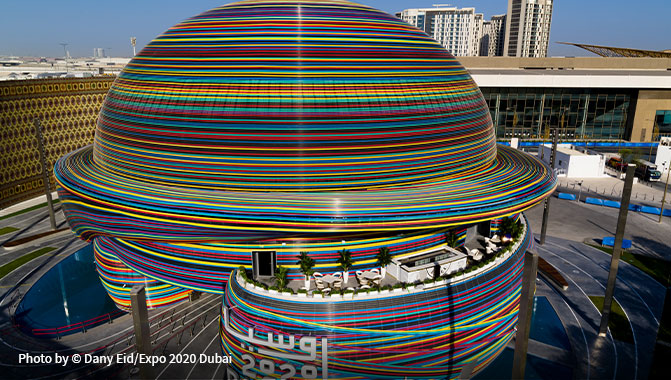 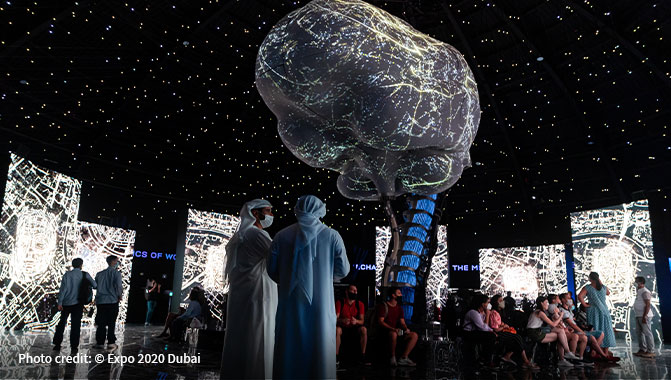 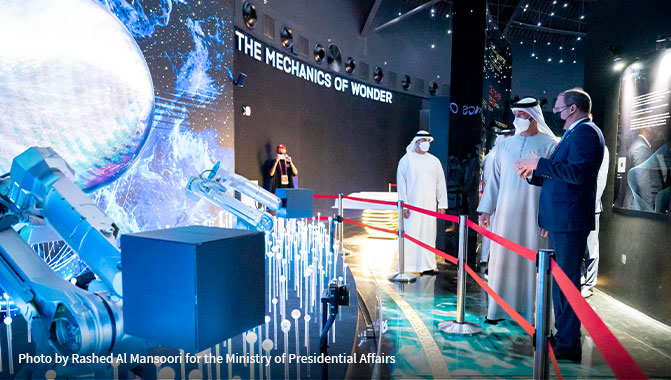 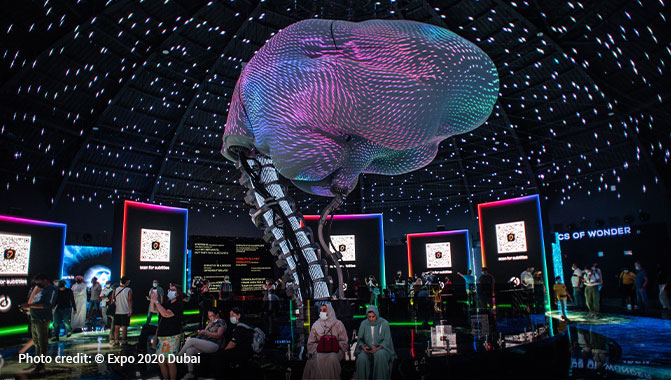 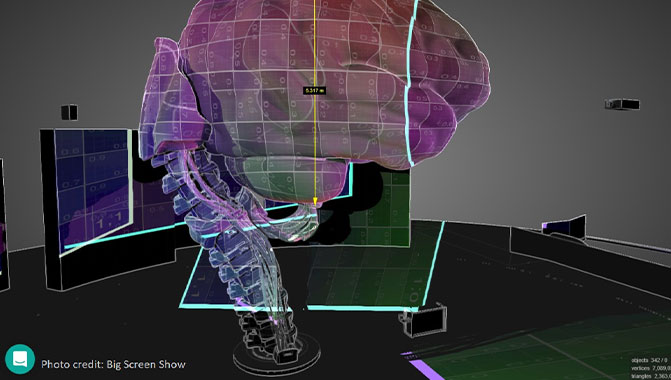 “We set out to tackle several very important objectives with our project,” says Sergei Tchoban, the architect behind the project. “First, to produce a spectacular structure whose architecture would align with the theme of the district and at the same time feature associations with Russia as a great country. One such association comes from the way the small dome sits inside the larger, which may be modern and emphatically dynamic, but also resembles the traditional Russian matryoshka.

Dreamlaser created the video content for the installation and were tasked with explaining the structure of the human brain in just six minutes. “To show how neurons function, we turned to figurative and abstract animation and universally familiar imagery such as flowers, stars, and the Northern Lights,” says Anton Kolodyazhny, Creative Director at dreamlaser.  “The key message of this interactive experience is that just as the brain develops by rebuilding connections, the more connections between people, the richer the field of ideas; in short, that the future of humanity will be defined by cooperation.”

The team from Big Screen Show (BSS) used seven Christie Boxer 4K30 - 30,000-lumen 3DLP® projectors - to map the brain. Six projectors are suspended from above, and one is below the kinetic model of the human brain. “Initially, we were given the task of illuminating the shape of the brain with projection,” says Project Manager Alexander Shagov from BSS. “As it turns out, the structure is non-static and can be opened up. This made the task somewhat more challenging and determined the final positioning of the projectors in relation to the décor.”

Looking back at the development of the project, Shagov explains: “In April, we carried out an on-site test of the projection on the kinetic sculpture. It became clear that a projection from below and an ultra-short throw (UST) lens setup to illuminate the underside of the model brain would be essential. To this end, we installed a 0.37:1 UST (4K) lens.”

“Thanks to the wide range of lenses available for the projectors, we had no problem dealing with the fact that there are places inside the pavilion where it is physically impossible to install projection equipment. And the correct placement of the projectors is essential. The ultra-short throw lens comes in handy here, adds Shagov.

During installation and operation, BSS employed Christie Conductor, which enables projectors to be synchronized and controlled from a single point.  “You can use [Conductor] to turn a group of projectors on or off with one key press and monitor the operation of a group of projectors online, including their status and any errors that may occur. You also have the option of working with each projector separately, adjusting all the required settings from a single workstation,” says Shagov.

For support and maintenance of the projectors, Christie Professional Services has been contracted to ensure the system performs flawlessly for the duration of Expo 2020.

The success of any project, especially one that is so significant on a global scale, rests largely on confidence in both people and technology. “We have been collaborating with Simpateka for a long time and have completed many projects with them internationally, including Expo 2010 in Shanghai, Expo 2015 in Milan, Expo 2017 in Astana, and now Expo 2020 in Dubai,” says Shagov. “We have worked with Christie equipment at myriad venues in Russia and around the world since the company was founded more than 20 years ago.”

Save time and simplify multi-projector control