TAIPEI –  Christie® is pleased to announce that Ambassador Theatres, one of the largest movie theatre chains in Taiwan, has chosen its state-of-the-art cinema solutions for two multiplexes located in Taipei and Taichung. 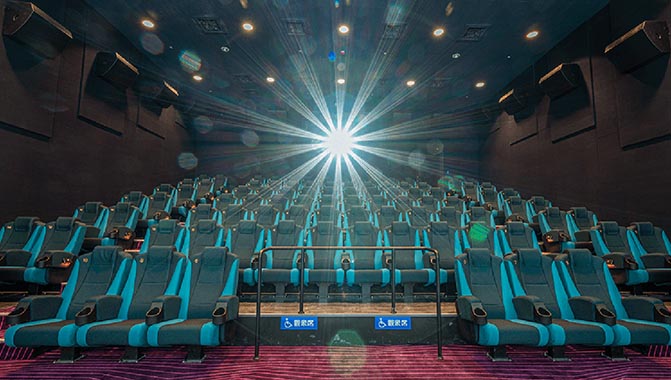 “As one of the leading multiplex operators in Taiwan, we are dedicated to offering an exceptional cinema experience to movie-goers,” said Joe Chang, president, Ambassador Theatres. “Christie’s leading edge cinema projection systems are the perfect fit for our multiplexes in Taipei and Taichung. Audiences will be impressed with incredibly colorful and detailed, true-to-life images that will greatly enhance their movie-going experience.”

In particular, the Grand Ambassador auditorium features a giant screen measuring 22 meters wide and 12 meters high (72 feet by 39 feet) lit by dual Christie CP4440-RGB large-format projectors that deliver a combined brightness of up to 90,000 lumens for the ultimate cinematic visual experience. Images from the two projectors have been perfectly aligned to display a completely seamless image using Christie® Mystique™ Cinema, an auto-calibrating image alignment software and camera kit that simplifies the calibration process for dual-projection setups.

The CP4440-RGB is a DCI-compliant, direct-coupled RGB pure laser cinema projector that excels in image quality, operational lifetime, and onscreen brightness, making it the ideal projection system for Premium Large Format theatres. Equipped with dual-laser optical systems (LOS) and high-speed CineLife+ electronics capable of 4K @ 120Hz HFR playback, the CP4440-RGB is one of the most advanced RGB pure laser cinema projectors on the market.

In addition, Christie CP4415-RGB pure laser cinema projectors are installed in the other two auditoriums of Ambassador Theatre (Ximending). Providing high-end cinema performance for smaller screens, the CP4415-RGB is a 15,000 lumen, compact, all-in-one DCI-compliant projector that excels in image quality and operational lifetime while providing a low cost of ownership.

Han Kim, executive director for APAC, Cinema, Christie, commented, “We are pleased that Ambassador Theatres has chosen our cinema projectors for deployment in flagship multiplexes in Taipei and Taichung. For more than five decades, Ambassador Theatres has been synonymous with offering high quality cinematic experiences to Taiwanese audiences. Its decision to invest in our innovative projection systems reflects the value and quality that Christie is known for in enhancing the cinema experience.”

Both the CP4440-RGB and CP4415-RGB benefit from Christie’s Real|Laser illumination technology, which provides exhibitors with over 50,000 hours of optimal performance. Featuring a patented sealed optical path, Christie Real|Laser provides unmatched long-term stability and reliability. Both models also deliver more than 95 percent of Rec. 2020 spec without filtering or color correction, as well as superior contrast ratio. The rich, deep and intense colors and contrast create astounding visuals for audiences to enjoy, while delivering significant operational efficiencies to cinema owners.