JAKARTA – Ch​ristie® is pleased to announce that its award-winning D4K40-RGB pure laser projector has been deployed in the newly inaugurated Association of Southeast Asian Nations (ASEAN) Secretariat Building in the Indonesian capital, delivering bright and larger-than-life visuals in its multipurpose auditorium known as Nusantara Hall.​ 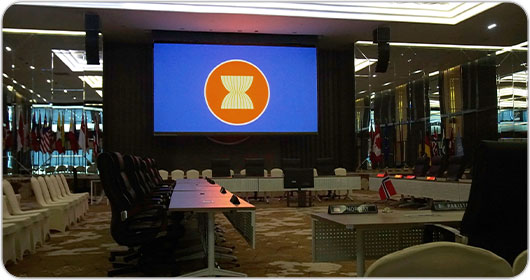 "Nusantara Hall is an important venue in the new ASEAN Secretariat Building and much emphasis has been placed in acquiring a high quality and dependable projection system for meetings and cultural performances," said Rizki T.P.R. Simangunsong, Head of Procurement at Indonesia's Ministry of Foreign Affairs. "We had put many projector models through their paces and after much consideration, we decided that the Christie D4K40-RGB is our preferred choice due to its well-built chassis, high quality visuals and reliable performance."

Simangunsong noted that Christie projectors have been deployed at various locations in Indonesia, such as the Ministry of Public Works. "This was one of the considerations during the procurement process. The Christie projectors used at these venues are proven to be reliable, and I'm pleased that this was also aptly demonstrated during the inauguration of the ASEAN Secretariat Building in August, where the Christie D4K40-RGB performed impeccably throughout the event."​

Sharing the same sentiments, Denny Adhadian, Associate Officer of ASEAN Secretariat Building, added, "We have been using the D4K40-RGB for four months now and operating it been a breeze. Besides delivering excellent performance, the image and build quality are also rock solid. I'm very satisfied with this projector."

CK Lum, Director, HIKA, commented, "The Christie D4K40-RGB is the perfect fit for Nusantara Hall in ASEAN's new headquarters – a large venue designed for meetings and events for officials and guests of the 10 Southeast Asian nations who are members of this intergovernmental organization. With its 4K resolution, high brightness and an exceptionally wide color gamut that reveals an amazing depth of detail, the D4K40-RGB excels in all tasks from PowerPoint presentations to video screenings."

Lum conceded that the projector's all-in-one, compact design and omnidirectional capabilities makes it stand out from the competition. He is particularly impressed with the D4K40-RGB's compact footprint, which simplifies the entire installation process and maintenance regime. Furthermore, its long-lasting, reliable solid state illumination delivering over 30,000 hours of operation to 80 percent brightness translates into a lower total cost of ownership in the longer term. 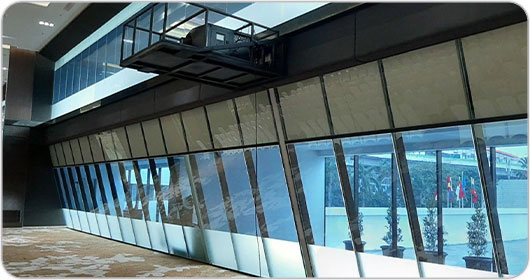 Michael Bosworth, Executive Director, Head of Enterprise for Asia Pacific, Christie, added, "We are delighted that our D4K40-RGB has been chosen to power the visuals in the new ASEAN Secretariat Building's Nusantara Hall. This is a clear testimony of the performance and value offered by our RGB pure laser projection technology in providing high quality and innovative shared experiences to our customers. As well, kudos to CK and his team for accomplishing yet another significant installation in Indonesia."

Large venues, sports facilities, domes, giant screens, planetariums and theme park attractions are among the many facilities that will benefit from the D4K40-RGB. Since its official launch earlier this year, the D4K40-RGB has been well-received by customers globally, including the organizers of Expo 2020 Dubai, which has named Christie as the event's official projection and display partner, and acquired more than 250 projectors to light up the Al Wasl Plaza's iconic dome.

Set up in February 1976, the ASEAN Secretariat's basic function is to provide for greater efficiency in the coordination of ASEAN organs and for more effective implementation of the regional bloc's projects and activities. The new ASEAN Secretariat building comprises two 16-storey towers emblematic of regional harmony, dialogue, and unity. It was officially inaugurated by Indonesian President Joko Widodo in August 2019 as the grouping celebrated its 52nd anniversary.