The light and sound musical, which celebrates the life and works of Mahatma Gandhi, is the second largest permanent projection installation in India 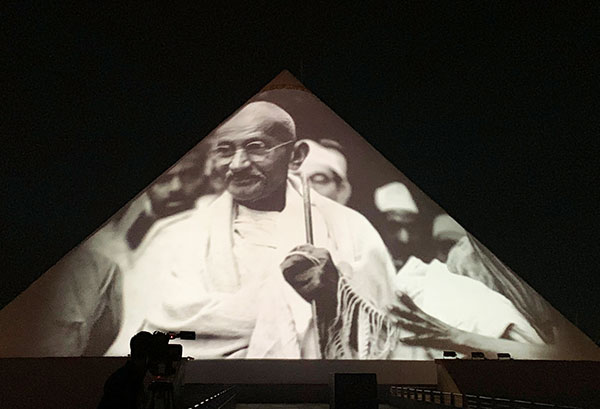 The 30-minute show, which features stunning projections using 16 Christie D20WU-HS laser projectors on the surface of the salt-mound-shaped museum, is the second largest permanent projection installation in India after the Statue of Unity (the tallest statue in the world, which also employs Christie projection technology for its nightly projection mapping show). It has been described as a fascinating showcase that pays tribute to the life, ideology and works of the late Indian leader dubbed “the father of the nation.”

Since its inauguration by Indian Prime Minister Narendra Modi earlier this year, the show has become a huge attraction that draws thousands of visitors to the museum on a daily basis. The installation and commissioning of the show was jointly undertaken by Christie’s trusted Indian partners, Bombay Electrical and Nolabel Immersive.

“We are very pleased and honored to be involved in the creation and execution of this major 3D projection mapping show, which highlights Gandhi’s principles of cleanliness leading to self-empowerment and therefore creating a base for a decentralized, self-administered society and nation,” said Amit Gupta, Managing Director, Nolabel Immersive. “Having used Christie visual solutions for various multimedia exhibits in the Dandi Kutir museum to great success, the museum decided that Christie’s high-brightness laser projectors are best-suited to deliver the visuals required for this new light and sound musical.”

The D20WU-HS was ultimately chosen as it has the best lumen-to-weight ratio – able to achieve the brightness needed for bold and colorful visuals with 20,600 ISO lumens, and yet weighing less than 100 lbs. (42 kg) for easy access and maintenance. And thanks to the enhanced color accuracy of Christie’s patented BoldColor Technology, the powerhouse performance of the D20WU-HS makes it a viable alternative to similarly bright 3DLP projectors.

Gupta noted that after a detailed site survey of the surrounding areas, the team decided that the projectors had to be installed within two structures overlooking the left and right side of Dandi Kutir’s façade. The D20WU-HS were then fitted in stacks of eight on each side to provide full coverage on the museum’s wall.

“Once we had identified the appropriate positions for the placement of all 16 projectors, the rest of the installation went ahead smoothly as planned. Due to its light weight and omnidirectional capabilities, we were able to easily lift and set up the projectors without the difficulties associated with larger projection systems. I’m glad to note that the D20WU-HS projectors performed superbly as expected, delivering amazing, true-to-life visuals that impressed all visitors since the show made its debut earlier this year,” Gupta added.

Michael Bosworth, Executive Director, Head of Enterprise for Asia Pacific, Christie, commented, “We are delighted that Dandi Kutir museum has chosen our high-performance and robust D20WU-HS laser projectors for this new 3D projection mapping show on its iconic façade. Congratulations must go to Amit and his highly proficient team for completing a remarkable installation.”

Located in Gandhinagar, the capital of India’s state of Gujarat, Dandi Kutir is the biggest permanent museum in the world based on the life and teachings of one man – Mahatma Gandhi. The museum takes the shape of a giant cone resembling a salt mound, which is a symbol of Gandhi’s historic Dandi March in 1930. Measuring 90 meters in diameter and 41 meters in height, the three-story museum creatively utilizes sophisticated technologies such as 3D mapping, holography, 360 projection, and transparent LED screens to provide a rich, multi-layered experience for visitors.