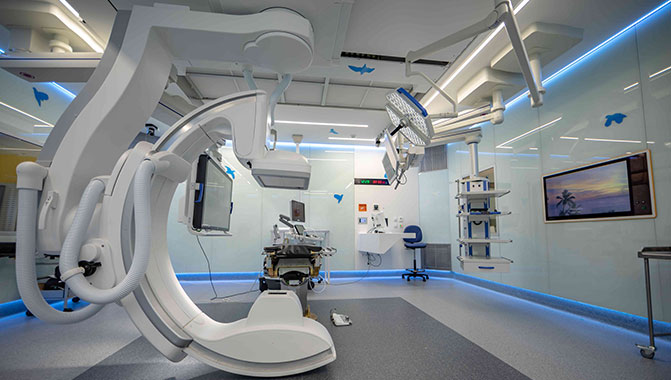 BARCELONA – Christie® Captiva ultra-short throw projectors were recently installed in three paediatric operating theaters in the Sant Joan de Déu Children’s Hospital in Barcelona so that children can watch cartoons or their favourite TV series before going under the effects of anesthesia. The idea behind this pioneering initiative in Spain is to make the patient’s experience before surgery as stress-free as possible.

The Christie Captiva projectors were installed as part of the refurbishment of the hospital’s surgical block, which has incorporated the most advanced new technology for minimally invasive procedures.

The new surgical block was designed to humanize the experience and reduce the trauma children may feel in operating theaters. The theaters are equipped with music and a lighting system that allows the light to be modified for each surgical situation. For instance, the light is blue when performing a laparoscopy, but green when the patient enters the theater in order to create a relaxing atmosphere.

The Christie Captiva DHD410S projectors are used to screen children’s cartoons, movies and TV series on the operating theaters, which makes the anesthetic induction, generally the most stressful moment of any surgical procedure for the patient, a much less traumatic process for children. 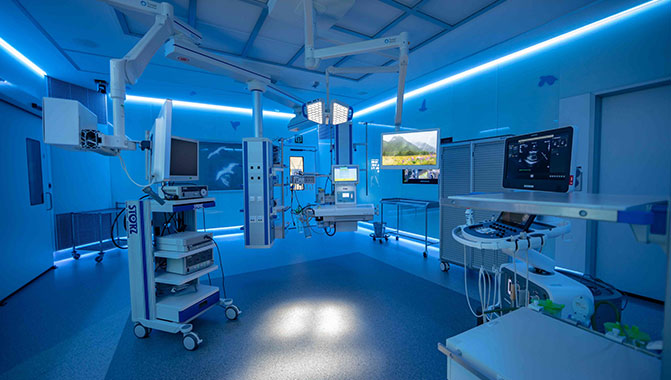 The projectors illuminate the glass walls of the operating theaters without any elements that might interfere, thus producing a striking effect and creating 3-meter wide images in the largest theater, 2-meter wide in the mid-sized theater and 1.5-meter wide in the smallest.

The main challenge of the AV installation was working in an operating theater, a highly specialized place where only medical grade screens are permitted. To this end, for each one of the operating theaters, Semic had to develop a special projection cabin in a false ceiling sealed with glass through which the light beam could pass.

The Christie Captiva DHD410S was an obvious choice given its 0.25:1 ultra-short throw lens, which means it can be placed at just a few centimeters from the wall on which it projects, without any kind of shadows that would obstruct the image, making it ideal for small spaces. Another decisive factor was the super-quiet functioning of the projector (32dB in eco mode).

Christie Captiva 1DLP®laser projector offers 4100 lumens and 1920 x 1080 resolution, provides 20,000 hours of high-performance operation without the need to change lamps and produces an 80-100" diagonal image size. Highly reliable, the 1DLP® engine also means that the projector can be used in intensive applications, including 24/7 mode, without interrupting operation at any time.

“Here at Semic we only work with the best brands, and Christie is our benchmark when it comes to projectors,” explained Marc Marquès Borrell, the project’s technical manager. “They are robust and provide deep, rich colors and have always given us the best results,” he added.

Semic has also installed two Christie DWU630-GS projectors with 1.52-2.89:1 lens in one of the hospital’s auditoriums, which seats 80 people. This 1DLP laser projector provides 6750 ISO lumens and WUXGA resolution (1920 x 1200). It also supplied another two Christie Captiva DHD410S for two classrooms in the hospital.

Marcos Fernández, director of Christie in Spain and Portugal, concluded: “We are delighted that our projectors are being used for such a noble purpose as cheering children’s spirits before they undergo a surgical procedure. We would like to congratulate the hospital for this initiative and also to thank our partners Charmex and Semic for their know-how in masterfully integrating our technology in such a complex setting.”