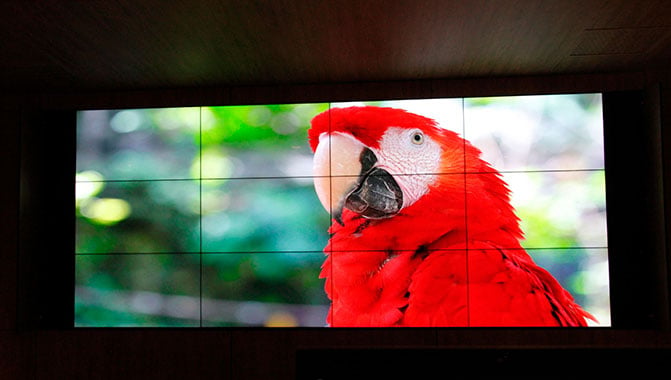 Quito, Ecuador – One of Ecuador’s largest private companies, which has interests in various sectors including retail and real estate, has recently installed a Christie® LCD video wall with the Christie Terra SDVoE system in its main auditorium, making it the first installation of Christie’s AV over IP technology in Latin America. SmartCo was the integrator commissioned with the design and implementation of the project, from design to execution.

The Christie video wall was installed in the new auditorium of the company’s headquarters in Quito. Built to hold 48 people, this executive meeting room was designed for presenting financial and management reports, videoconferences and training.

“Our commission was to install a high-end AV system,” explained Pedro Egas, president of SmartCo, adding that, “because it was going to be used by the company’s senior executives, we wanted to ensure that the resolution was sharp and that you would be able to easily see small numbers and other details in presentations on the video wall.”

The SmartCo team immediately thought of LCD technology, selecting 12 Christie Extreme Series panels to compose a 4x3 video wall with a resolution of 7680 x 3240. “We specified these displays because we had to guarantee that the bezel size was as small as possible and that the definition of the data being screened could be clearly seen,” pointed out Egas. Christie Extreme Series has an extremely narrow combined bezel width, making the video wall virtually seamless.

“Besides the extremely narrow bezel, what we really liked about these displays was the ability to control them in network, which makes it so much easier to handle. And we were also very impressed by the high definition in terms of colour and brightness,” Egas said.

To transmit and process the signals, SmartCo chose Christie Terra. “We opted for this SDVoE solution (Software Defined Video over Ethernet) because of the system’s innovative technology, which resonates with our client’s innovative vision. We were also swayed by the robust transmission, because when you have videoconferences you need to guarantee that the switching between inputs is fast and seamless, and without any delays that might complicate the presentation.”

SmartCo installed five Christie Terra Transmitters, 15 Christie Terra Receivers and one Christie Terra Controller to ensure the optimum operability of all the systems. “The solution is excellent,” said Egas. “The speed, stability and simplicity of the infrastructure is incredible, apart from the fact that it is easily scalable, which means that you can add controllers, transmitters and receivers as needed, making it a really spectacular technology.” 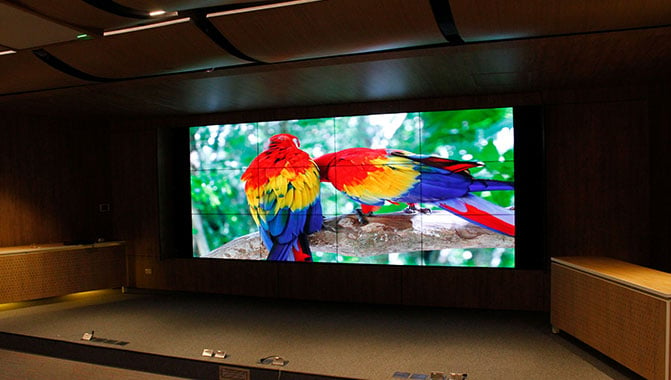 Twelve of the Terra Receivers are used to feed each of the panels in the video wall, thus ensuring the best possible resolution on each screen and the video wall as a whole. Another two Terra Receivers are used to relay signals to two Christie SUHD551-L LCD back-up screens located on a small lintel at the back of the auditorium, which acts as extra support for the back rows and spectators furthest away, and for screening other images if required. One additional Terra Receiver is used as a monitor when needed, so that presenters do not have to turn their backs to the audience while making a presentation.

Three Terra Transmitters are used to transmit physical signals directly from the podium, with one located in the centre and the remaining two on either side, thus ensuring a physical connection from any computer that needs to be used for a presentation. One Terra Transmitter is used to transmit a Cisco videoconference signal, and another is used to transmit wireless presentations from a Crestron AirMedia system to the video wall. Lastly, the Terra Controller is the centre for all the video wall signals, from where the operators assign layouts and transmit audio.

Pedro Egas noted that the transmission technology over 10G networks “is incredible and produces a very high quality result and, above all else, a very efficient and fast performance of the system unlike any existing video wall matrix or processor.” He praised “the response and support capacity we have had at all times from Christie’s technical and administration team in the USA and Latin America to overcome any possible drawbacks that may arise in these kinds of projects. It was absolutely impeccable and that’s why Christie is a world leader in the professional audio-visual sector.”

Complete control and management of SDVoE systems over 10G networks