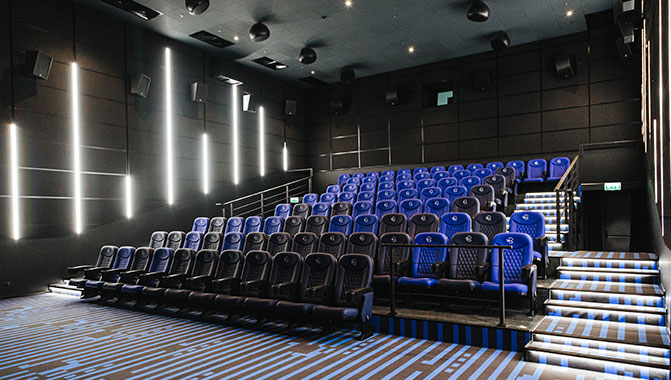 MOSCOW– The Cinema Star, a new state-of-the-art multiplex located in the Kvartal West multipurpose center on Aminyevskoye Shosse in Moscow, opened its doors in August. The capital’s new theatre is the first Dolby Atmos cinema to also feature the Christie® СP4440-RGB projector with Real|LaserTM  illumination technology.

"Cinema Star’s new multiplex is a great example of how cinemas can install both state-of-the art equipment like Christie RGB pure laser illumination for a premium customer experience as well as Christie xenon lamp-based projectors, proven for their reliability and value to exhibitors," said Brian Claypool, executive vice president, Cinema, at Christie.

Christie RealLaser cinema projectors with solid-state illumination are opening up a new frontier in cinema exhibition. What makes these models stand out is their expanded color space, which comes close to reaching the Rec.2020 standard, and their longevity (the projectors offer more than 50,000 hours of performance with no loss of brightness: levels exceed the DCI specification throughout the equipment’s operational lifetime).

“We chose Christie projectors for this theatre. We have been working with the company for years, and have found it to be an excellent manufacturer,” says Leonid Yakovlev, Technical Director of the Cinema Star chain. “Every consideration was made to ensure cinemagoers’ comfort in all 616 seats.

Yury Mishin, Chief Equipment Engineer at Cinema Star, added: “From Christie’s wide range of technology, we opted for digital projectors for our screens. When compared to cinema projectors with similar specifications from other manufacturers, Christie projectors stand out for their ease of use, reliability and maintainability. I would also note the exceptional quality of the xenon lamps.”

The choice of Christie RealLaser technology for the Cinema Star multiplex was no accident: “We reviewed the market for cinema projectors with laser illumination and concluded that there were simply no other contenders in the RGB lighting system segment. We hope to use these projectors for many years to come, and that they prove to be a cost-effective choice,” adds Yury.

“Cinema Star is a longstanding Christie partner, and two thirds of the chain’s screens are already equipped with our projectors. We have been collaborating for nearly a decade now, and we are delighted that Cinema Star has chosen Christie equipment and our flagship СP4440-RGB projector with RealLaser illumination technology for its new screen,” added Anna Vostretsova, Christie’s Business Development Manager in Russia.

The multiplex in Kvartal West on Aminyevskoye Shosse is the chain’s thirtieth theatre.