MUMBAI – Christie® is pleased to announce that PVR Cinemas, the market leader in terms of screen count in India, has deployed its CP4450-RGB large-format RGB pure laser cinema projection system for a new drive-in theatre in Mumbai.

Located in Bandra Kurla Complex, a prominent upmarket commercial hub in downtown Mumbai, this drive-in theatre is housed on the rooftop of a premium retail mall named Jio World Drive developed by Reliance Industries. It can accommodate 290 cars and is billed as a one-of-a-kind movie-going concept—an open-air, on-the-rooftop theatre equipped with state-of-the-art projection technology situated within a prestigious mall in the city centre. The theatre features a giant screen measuring 25.5 metres wide, while audio is supplied by broadcasting the soundtrack over FM signal through the car’s sound system. 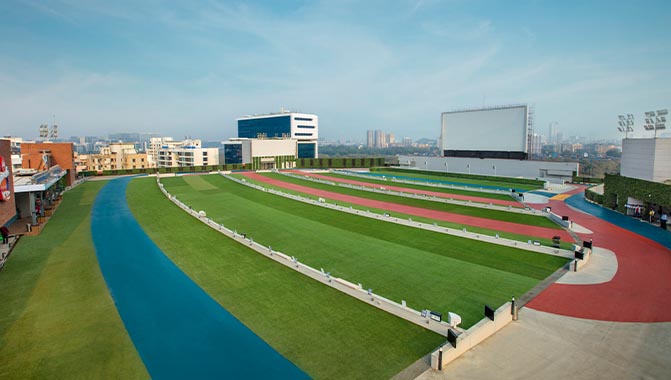 With an output of 55,000 lumens, the CP4450-RGB is the brightest direct-coupled RGB pure laser cinema projector on the market, making it the perfect choice for this outdoor venue. It also features dual-laser optical systems, ultrafast processing enabling 4K @ 120Hz HFR playback, and Christie Real|Laser™ illumination technology that exceeds DCI standards to bring a crisp, unmatched image to the screen. The projector was installed by Christie’s valued Indian partner, TSR PROVA (TSR), which is actively pushing for the adoption of Christie’s latest cinema technology across India.

Ajay Bijli, chairman and managing director, PVR Limited, said, “We are excited to open our very first drive-in theatre in Mumbai and feel happy to welcome back our patrons to a world-class experiential concept, redesigned and revived for our audience. Christie’s CP4450-RGB laser cinema projector, with its incredibly colourful and detailed, true-to-life 4K images, is suitable for an unparalleled outdoor cinema experience.”

Tan Sri Dato Sri Dr. Ramasamy, managing director, TSR, commented, “The decision by PVR Cinemas to invest in Christie’s CP4450-RGB pure laser cinema projector is a clear testimony of its high performance, reliability and ease of maintenance. We’re proud to be involved in this highly-anticipated project that demonstrates our strong commitment to the cinema sector to deliver best-in-class movie experiences to Indian audiences in the post-COVID-19 era.”

Kanwal Brar, sales director for India, Cinema, Christie, added, “We are absolutely delighted that PVR Cinemas has accomplished two ‘firsts’ with its deployment of our CP4450-RGB pure laser projector. Not only is PVR the first exhibitor in India to operate this advanced cinema projection system, it’s also the first to utilize it for an open-air cinema in the country.

The CP4450-RGB is ideal for the Jio drive-in theatre—its rich, deep and intense colours and contrast create astounding visuals for audiences to enjoy, while delivering significant operational efficiencies to cinema owners.”

The CP4450-RGB is built on the CineLife+ platform and is capable of displaying HFR titles in 4K at 120 frames per second, which eliminates the motion blur typical of giant screen experiences to display artifact-free images in 2D and 3D. This adds to the already heightened sense of realism created with Christie Real|Laser illumination. As well, the CP4450-RGB achieves greater than 95% of the Rec. 2020 color space, features superior contrast ratio performance versus other projection technologies, and has a long-lasting light source that offers over 50,000 hours of optimal performance.

Designed to support the content and formats of the future, the CP4450-RGB has proven itself to be a trailblazer in the PLF market segment. The CINITY Cinema System, developed by Christie for China’s Huaxia Film Distribution, is based on the CP4450-RGB’s architecture and technology to deliver a variety of advanced technologies, including 4K, 3D, HFR, HDR, and Wide Color Gamut (WCG) for an extraordinary movie-viewing experience in PLF auditoriums.