The Motherland is calling! 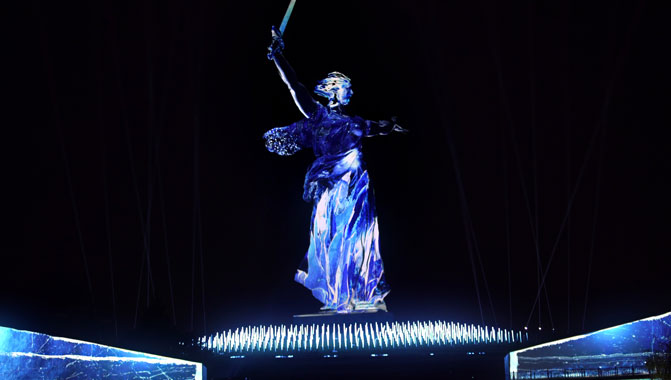 “We’ve been preparing ‘Light of the Great Victory’ installations for several years now, but this year was a special one. First of all, we now have the technical capability to illuminate a monument of this scale using only a very small number of projectors. The color transmission quality, richness, and intensity of RGB laser technology are what made all the difference for us,” Dreamlaser co-founder Denis Chuchko explained. “This was also important from a television picture perspective, as we knew that thousands of viewers would be watching the live broadcast and recordings of it following the event. This was also the year that we introduced an AR component to the show. We installed an additional 26 spotlights at the top of Mamayev Kurgan and covered the hill with a ‘burning field’ using thousands of LED bars.”

The celebrations were organized by Region_34 (the Volgograd Regional Government), the Agency for the Organization of Mass Cultural Events, and the Battle of Stalingrad Museum and Preserve.

Erected in 1967 and recently restored, The Motherland Calls monument remains among the world’s top ten tallest statues in the world. It retained the title of world’s tallest non-religious statue until 2018, when construction of the Statue of Unity in India, was completed. At night, the Statue of Unity can be viewed for miles as a result of projection mapping using Christie technology.