The new Shanghai Astronomy Museum, currently the largest planetarium in the world, is an institution like no other. Besides sporting a multilayered, curvilinear shape that resembles a deconstructed spaceship, its total area spans a staggering 38,000 square meters (420,000 square feet), and yet visitors won’t find any straight lines or right angles in it.

Thanks to an awe-inspiring design by US-based Ennead Architects, this unique concept has been inspired by the orbits of celestial bodies and geometry of the cosmos. And rightly so, as the building’s three main architectural components – the Oculus, Inverted Dome and Sphere – function as astronomical instruments that track the sun, moon and stars. These astounding works of architectural engineering are just the beginning of a fantastic journey of exploration that transports visitors through time and space. 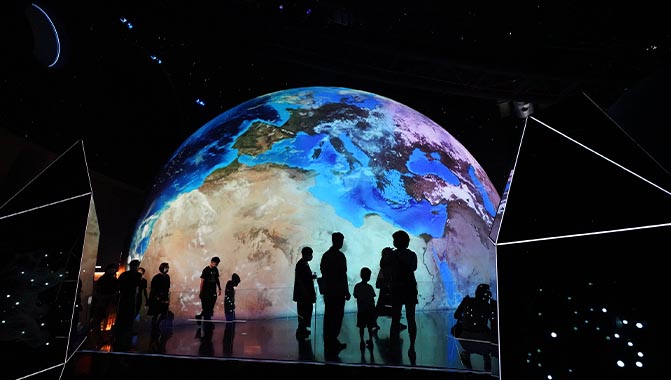 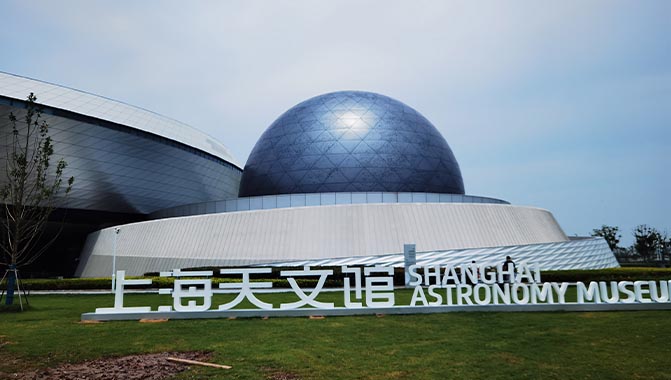 The impressive layout extends to the museum’s interiors, where numerous exciting exhibits are powered by advanced audiovisual technologies to provide a highly engaging and immersive experience to visitors. These include spectacular projections accomplished by more than 40 Christie HS Series and GS Series 1DLP® laser projectors of varying brightness (from 6,350 to 20,600 lumens) and image resolutions, along with real-time video playback and processing achieved by the powerful Christie Pandoras Box® V8 and Christie Widget Designer.

The Christie HS and GS Series laser projectors are deployed across 12 galleries in the three main exhibition zones titled "Home", "Cosmos" and "Odyssey", which lead visitors on a tour around the solar system, faraway galaxies and even black holes. The exhibits are also designed for a greater understanding of the history of astronomy and inspire visitors to think about its future.

Christie’s trusted partner Wincomn Technology was responsible for the installation and commissioning of projection solutions in the "Home" exhibition zone and various exhibits. Zhongqing Yingye Group managed the projectors used in several other galleries, such as the Christie 4K7-HS equipped with 4K UHD resolution; while the suite of Christie Pandoras Box products were installed by Marvel Vision, one of Christie’s distributors for content management and image processing solutions in China.

Among the highlights are stunning projections on a huge rotating globe measuring 20 meters (66 feet) in diameter using seven Christie D20WU-HS laser projectors, and interactive projections on a large wall measuring 60 meters (197 feet) in length using 10 Christie DWU1075-GS laser projectors. Completed by Wincomn Technology, these two exhibits have been widely praised by visitors for their breathtaking visuals and realism since the museum’s official opening in mid-July.

"Being an exceptional astronomy museum, the level of accuracy required for all displays and exhibits is more stringent than conventional entertainment venues," says Tony Chen, general manager, Wincomn Technology. "As such, we needed a fleet of high-performance projectors that are able to meet this requirement. The Christie D20WU-HS and DWU1075-GS, which have a brightness of 20,600 and 10,875 lumens respectively, emerged as our top choices. Both models are equipped with Christie BoldColor Technology that creates the color balance needed to accurately reproduce colorful images."

Chen relates that the team grappled with a number of challenges in projector placement for the rotating globe exhibit as there are objects positioned around the spherical projection canvas. Additionally, all seven D20WU-HS laser projectors had to be discreetly installed so that they are "hidden" from view. After several rounds of light path simulations which lasted weeks, the Wincomn team found the perfect solution that not only allowed the visuals to be perfectly displayed on the entire globe, but also minimized the possibility of visitors obstructing the projected light path.

"We had to manually calibrate the projected images in the final phase due to the complexity of the installation and other on-site challenges," Chen explains. "Although the process took much longer to complete, I’m glad that the final results are highly satisfactory."

Another gallery that’s popular with visitors consists of interactive projections along a covered bridge titled "Interstellar", which explores the connection between human beings and the universe. Visitors' images are picked up and displayed in real-time as galactic stardust on a wall measuring 60 meters long and four meters high. According to Chen, the narrow width of this gallery created challenges in the overhead projector deployment.

"To overcome this space constraint, all Christie DWU1075-GS laser projectors had to be fitted with ultra-short-throw lens to reduce the projection distance, and allow them to be precisely installed at designated positions to produce optimal images," says Chen.

Marvel Vision’s representative Daniel Xu, who was directly involved in the installation process, explains that the curved structure of the "cosmic thread" exhibit is the culmination of digital image warping and rendering that has become the mainstay of digital art exhibits. Not only does this particular showpiece combine curved surface modeling and digital image carving, it is also a revolutionary combination of the sine wave and movement on curved surfaces.

"While projection mapping tasks on curved surfaces in motion are beyond the capabilities of conventional multimedia systems, the Christie Pandoras Box V8 accomplishes them with ease," says Xu. "With its powerful and accurate 3D surface correction tools, as well as the Widget Designer’s True 3D rendering engine and multi-protocol interactive platform, we are able to achieve excellent motion-driven visual effects that are required for this exhibit, thereby transforming this artistic blueprint into reality. We’re very pleased that the end results have been fully endorsed by various stakeholders."

April Qin, sales director for China, Enterprise, Christie, notes, "The Shanghai Astronomy Museum marks a new milestone in the integration of science, nature and modern technology to provide an 'out-of-the-world' experience for astronomy fans and the general public. We are thrilled that a wide range of Christie laser projection and content management solutions have been installed by our partners to deliver awe and wonder, enabling visitors of all ages to explore the universe with greater detail and realism."

The Shanghai Astronomy Museum marks a new stage in the development of the super-large comprehensive science and technology museum cluster that also includes the Shanghai Science and Technology Museum and the Shanghai Natural History Museum. This world-class facility is a fine demonstration of Shanghai’s soft power and promotes the high-quality development of China’s museum industry in the new era.

The Intellectual Property rights of all exhibits mentioned in this article belong to the Shanghai Astronomy Museum. Do not use without authorization.