Ambaji Temple, located on the summit of the 490-meter-high (1,608-foot-high) Gabbar Hill in the Indian state of Gujarat, is regarded as a revered shrine by the Shakta Shaktism sect of Hinduism. Millions of devotees visit the temple every year and it is one of the most auspicious Shakti Peethas (significant shrines and pilgrimage destinations in Shaktism) in India.

Built in the 4th century AD, this sacred shrine is among the top cultural and tourism spots in Gujarat. Its rich history and heritage has prompted the Gujarat state government and the Gujarat Pavitra Yatradham Vikas Board to propose the creation a unique son et lumière to boost regional nighttime tourism – by using the steep slopes of Gabbar Hill as the natural canvas of this unprecedented visual spectacle. 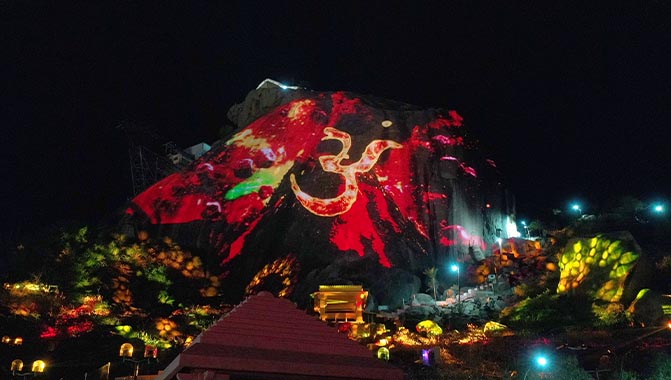 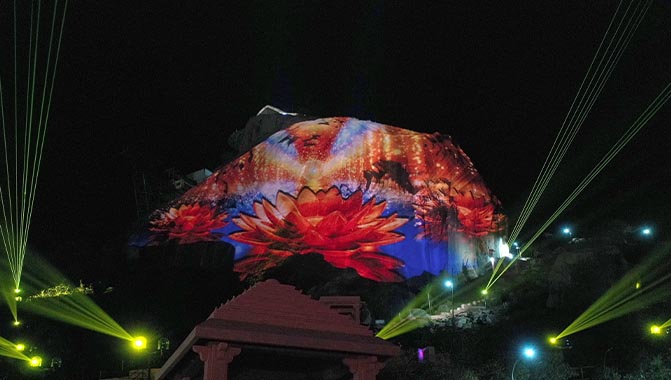 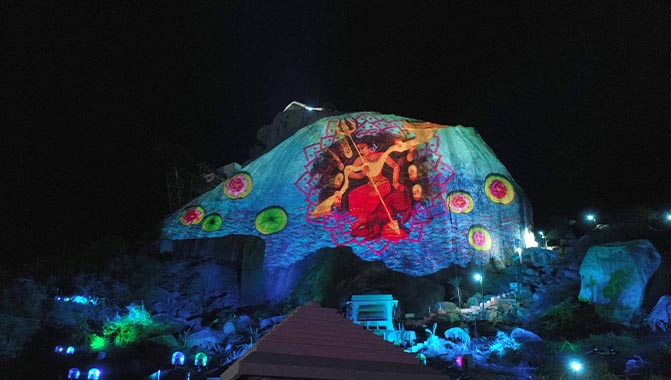 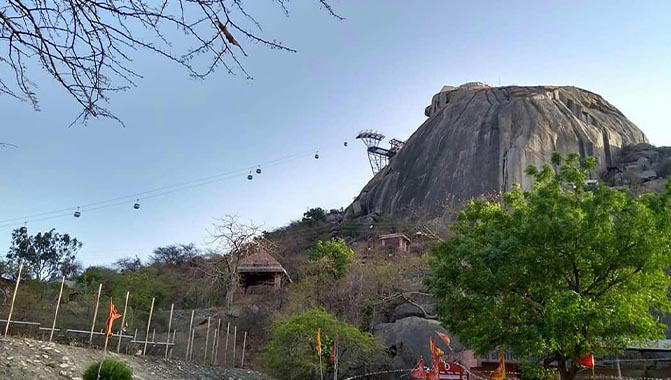 Prominent and leading multimedia technologies design firm Rhino Engineers was appointed the audiovisual consultant for the nighttime illuminations of this project, while the design and execution of this ambitious light and sound show were undertaken by Tricolor India Schauspiel. The latter is known for numerous high-profile, large-scale projects across India, including the recently completed projection mapping showcase on the Statue of Equality in Hyderabad.

“This is the first time in India that an innovative 3D projection mapping show has been applied to the façade of a large natural landscape,” says Narendra Naidu, principal consultant, Rhino Engineers. “Projecting vivid imagery on this massive mountainous rock is a new and exciting concept that had yet to be attempted here. As AV consultant, we are responsible for checking and verifying the quantity and quality of the project’s implementation, as well as ensuring that the theme and concept are perfectly aligned during the execution process.”

This project was originally conceived in 2013, with the same concept work order awarded to Rhino Engineers. Naidu explains, “However, it couldn’t be executed during that time for reasons unbeknownst to us. Nevertheless, I am very happy and proud that this ‘decade-long-nourished dream’ has finally come to fruition.”

Himanshu Sabharwal, creative director, Tricolor India Schauspiel, adds, “We have to achieve a projection coverage of 265 meters (869 feet) wide and 68 meters (223 feet) high on Gabbar Hill, which exhibits a dark, dull surface due to environmental conditions. This requires a fleet of high brightness projectors with unparalleled image quality. Christie’s D4K40-RGB pure laser projector fits the bill perfectly with 45,000 lumens and 4K resolution, providing us with vibrant and lifelike images.”

A total of six Christie D4K40-RGB projectors were deployed, along with an array of luminaries and immersive sound systems to create an enveloping and multi-sensory experience. To create the show’s contents, the Tricolor team delved into the stories and legends of Ambaji Temple and performed a drone shoot to obtain detailed information on Gabbar Hill’s terrain and to determine the ideal distance for projector placement. A chroma shoot with live performers was also conducted separately to create various scenes for the show.

“This project is an amalgamation of our exquisite creative process and technical prowess, as the delivery time for this project was only a month,” says Sabharwal.

The six D4K40-RGB pure laser projectors were mounted on two specially constructed projection towers, each measuring about five meters (15 feet) in height. Tower 1 was fitted with two projectors horizontally adjacent to each other, while Tower 2 had four projectors stacked in a two-by-two matrix. All projectors are protected by weatherproof enclosures from Warrior and they are placed about 120 meters (394 feet) away from Gabbar Hill, which is the ideal distance to display optimal visuals on the hill’s uneven and dark surface.

“This is the largest projection mapping that we have presented on a natural landscape since 2016’s Dharti Aaba light and sound show in Jharkhand’s Ranchi district, which was staged on the hillside of Kanke Dam using four 22,000-lumen Christie projectors,” says Sabharwal. The show, which was commissioned to honor Indian folk hero Birsa Munda in his home state of Jharkhand, created a huge sensation upon its inauguration.

In comparison, the Ambaji Temple 3D projection mapping show is much larger in scale and complexity. “The coverage area for the Kanke Dam light show was approximately 44 meters (144 feet) wide and 16 meters (52 feet) high. These are less than a third of the size of the projections that we’ve accomplished for the Ambaji Temple project,” Sabharwal explains.

“Projection technology has come a long way in recent years. Utilizing just six RGB pure laser projectors to attain such a massive coverage is a feat not achieved by many. So far, this is the largest 3D projection mapping show to be executed on a natural landscape in India.”

The project has since been nominated for the largest 3D projection mapping to be executed on a mountainous surface in the LIMCA Book of Records, an annual reference book documenting national records held by Indians.

Completing the job ahead of tight deadlines

“When it comes to projects of such magnitude with extremely strict deadlines, it is absolutely critical to have flawless planning and a workforce that can abide by the timelines,” Sabharwal shares. “We are thankful to all teams involved in this massive spectacle, who finished their tasks well in advance as promised. Likewise, we are grateful to Christie for the timely delivery of the D4K40-RGB projectors on-site.”

His sentiments are shared by Rhino Engineers’ Narendra Naidu, who notes, “The light and sound show utilizing Gabbar Hill as a facade has successfully created a one-of-a-kind, larger-than-life experience for visitors and pilgrims, taking them on a fascinating journey of this ancient temple. We are delighted to offer our expertise for this landmark installation, which achieved several milestones in terms of scale, content delivery and the types of AV technologies used. We have every reason to rejoice and be proud of what we have achieved.”

Rishubh Nayar, sales director for India, Enterprise, Christie, comments, “We’re thrilled that our high performance D4K40-RGB pure laser projectors have been chosen to illuminate Gabbar Hill, which is home to the holy Ambaji Temple that this astounding projection mapping show is dedicated to. This is a superb demonstration of the capabilities of our D4K40-RGBs, which have elevated large-scale projections to new heights. Kudos to Tricolor India Schauspiel and Rhino Engineers for their hard work to deliver this milestone project for India and the entire world to see.”